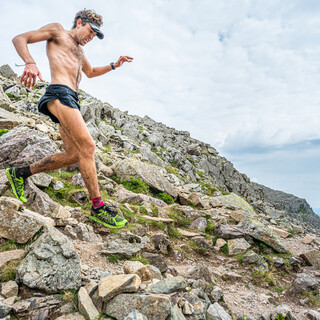 In July, Jack Kuenzle flew to the UK and bought a camper van. The 27-year-old didn’t want to squander the mandatory three months of car insurance. It’s safe to say he did not. In case you lived under a rock (or simply in a camper van) all summer, Jack set FKTs on a variant of the Ramsay Round and the Bob Graham Round—two of the most iconic routes not only in the UK, but on the planet.

Etching his name on the Bob Graham required Jack besting the GOAT of ultra and trail running Kilian Jornet. In the meticulous scouting, spreadsheet-scouring fashion of a former Navy SEAL, Jack blew Kilian’s time off the hilltops by over 28 minutes.

Tune in to the latest episode of the FKT Podcast to get the play-by-play of the “dramatic rollercoaster” those 12 hours, 23 minutes, and 48 seconds held—as well as the aftermath.

“My whole life, I’ve compared myself to Kilian,” Jack says on the podcast. “It was honestly very strange to beat his time. This doesn’t really count. If you want to try and compare yourself to Kilian, you have to go race Kilian on the same terms.”

Jack and Kilian approached the Bob Graham quite differently, and they contended with dramatically different conditions during their attempts. But those nuances are what make FKTs so intriguing. Recording your best effort on a route requires so many more variables than a race, where everyone copes with the same conditions on the same day. FKTs layer in unique levels of scouting, strategy, and soul-searching that expand the skillset required to excel.

In addition to that internal skillset, going after records like the Bob Graham requires a tremendous amount of community building. Jack sheds light on just how essential support from local runners proves in these supported round attempts. He also opens up about managing anxiety-induced insomnia. And Jack explains why he eschewed the traditional Ramsay Round—commonly considered Scotland’s premier route—for the lesser-known Tranter variant.

Back across the Atlantic in June, Jack set the FKT on the White Mountains 100, a 104-mile stretch of the Appalachian Trail through some of New Hampshire’s rockiest, rootiest, gnarliest terrain. Classified as “probably the hardest thing I’ve ever done,” at the time, Jack reevaluates that assessment after his summer in the UK.

If you missed it, scroll back through the archives to episode 165, Jack’s first interview on the FKT Podcast. And keep up with Jack’s relentless adventures on Instagram, his sporadic uploads to Strava, and his ever-growing list of FKTs on fastestknowntime.com.