Washington to Winnipesaukee is a point-to-point route that connects two of New Hampshire's most iconic landmarks- The summit of Mount Washington, the state's highest peak, and the shore of Lake Winnipesaukee, the state's largest lake.  It's a nearly fifty mile route that starts above treeline, enjoys the beauty of the Presidential Range, and goes over Boott Spur before dropping onto one of the White Mountain's most historic trails, the Davis Path.  The entirety of the Davis Path is enjoyed, followed by a short road run on Route 302, after crossing the Saco River by bridge.  Leaving Rt 302 one gets into the less traveled parts of the White Mountains, while still experiencing clearly defined trails, and getting a taste of New Hampshire rich logging history by utilizing a series of historic logging railbeds, as you head up the Sawer River Road and down the Sawyer Pond Trail (passing beautiful Sawyer Pond), and crossing the Swift River (the only stream requiring fording), just before reaching the Kancamagus Highway.  A short road run on the Kanc ends when you bear right onto the Olivarian Brook Trail to Paugus Pass, the Lawrence Trail, and Old Mast Road to Ferncroft.  The final 15 or so miles are a road run on quiet, backcountry roads. This section brings you through majestic Wonalancet, with views of Whiteface and Passaconaway, through the village of North Sandwich, over Top of the World, past Little Pond, and into Moultonborough, NH via Tilton-Haley Road.  The final few miles are quite flat as one makes their way to Lee's Mills, the northermost point of Lake Winnipesaukee, which serves as a public boat launch and the home of the Lee's Mills Steamboat Meet, an annual gathering of steamboats that has been run continuously for 50 years.

There are a few fun logistics involved, primarily how to get yourself to the top of Mount Washington for the start.  While one could certainly hike the mountain prior to running this route, they could also utilize the Auto Road (as we did).  Several days per summer the Auto Road even opens for sunrise, enabling one to maximize daylight hours for this 48 mile excursion.  Several road crossing, and numberous stream crossings, make access to water and supporters relatively easy, but it's general remoteness gives this route a lot of charm. For much of this route you will not encounter many other hikers, as it's not linking 4,000-footers, despite being in the heart of the White Mountains. This route, which runs nearly perfectly north to south, was largely the brainchild of Russ Hoburg, in consultation with me and my daughter, Adah Chapman.  We enjoyed our time together running this route in the summer of 2021, and only recently had the idea to submit it to the FKT website, after Adah established the women's FKT on the Double-Pemi in 2022.  While there is over 5,000 ft of vertical gain, it is largely a downhill route, and we think it could be one that could be run in a blazing fast time by those with the skills and fitness to put it to the test.  It would be fun to see what others could do on this route. 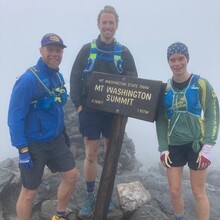 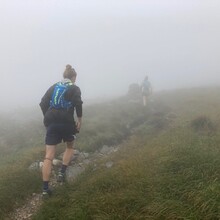 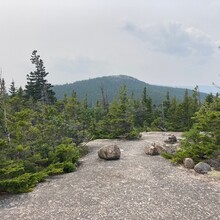 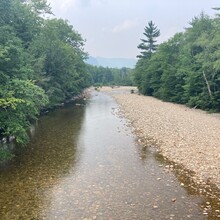 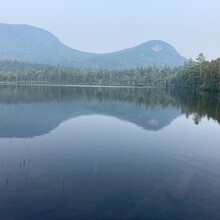 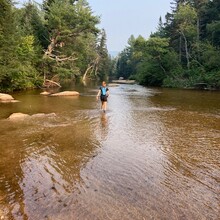