Article: Not Your Average Picnic

While the word “picnic” evokes imagery of wicker baskets, quilted blankets, and neatly packed meals, these were not quite the components in my mind as I set out on the “Shasta Picnic". Replace the blanket with a wetsuit, the basket with a bike, and that tasty sandwich with a summit of Mt. Shasta. (You can keep the beer, just make it a Cerveza Athletica from Athletic Brewing.)

Now we’re on the same page.

The Shasta Picnic is modeled after the infamous Grand Teton Picnic with the exception of the swim coming first and last instead of in the middle, as it does during the original Grand Teton version. However, this small change does not make this undertaking any less daunting. Ram-rodding a whopping 10,995’ of vertical gain into 22.2 fewer miles than its predecessor, the Shasta Picnic packs a punch.

A side by side comparison… 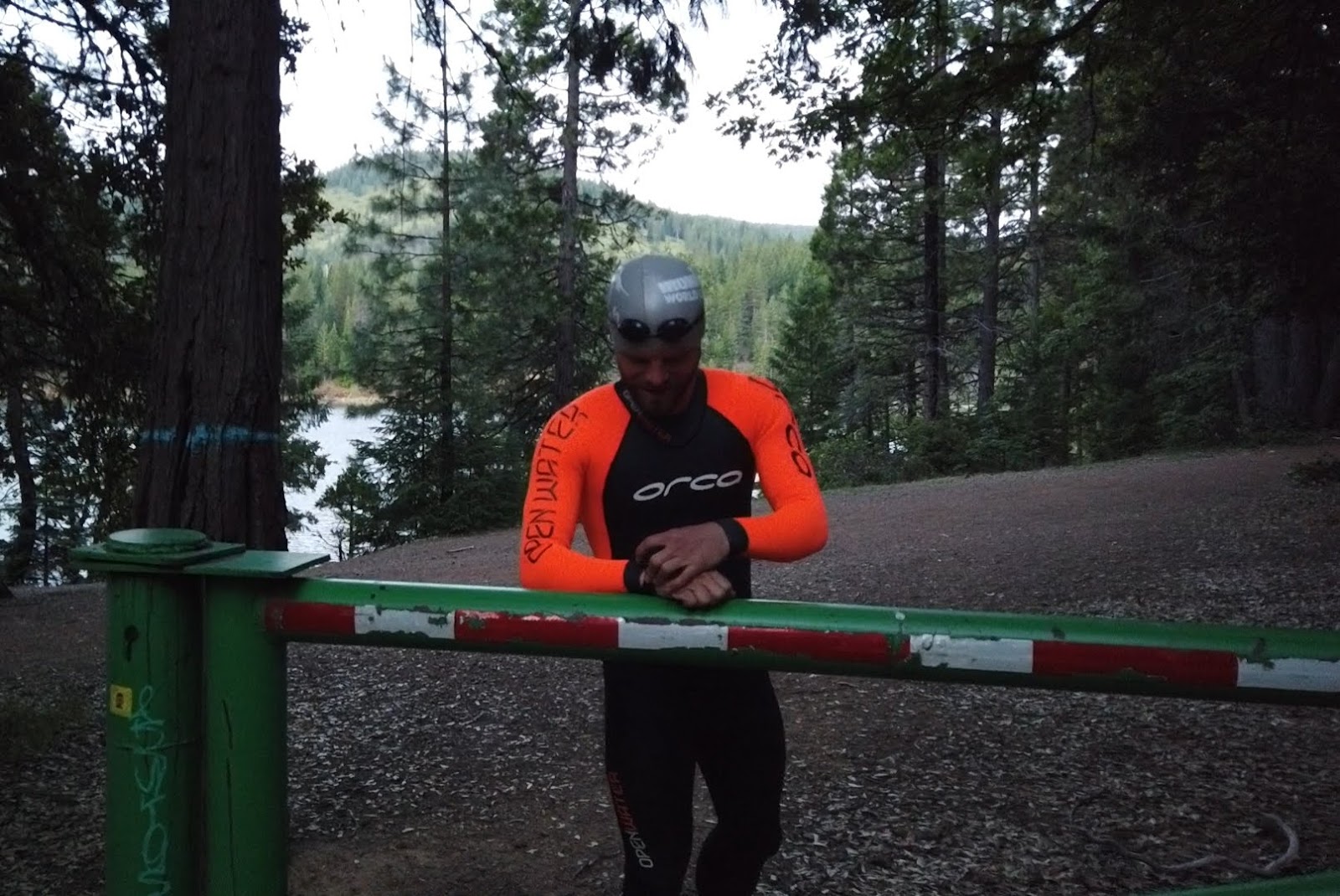 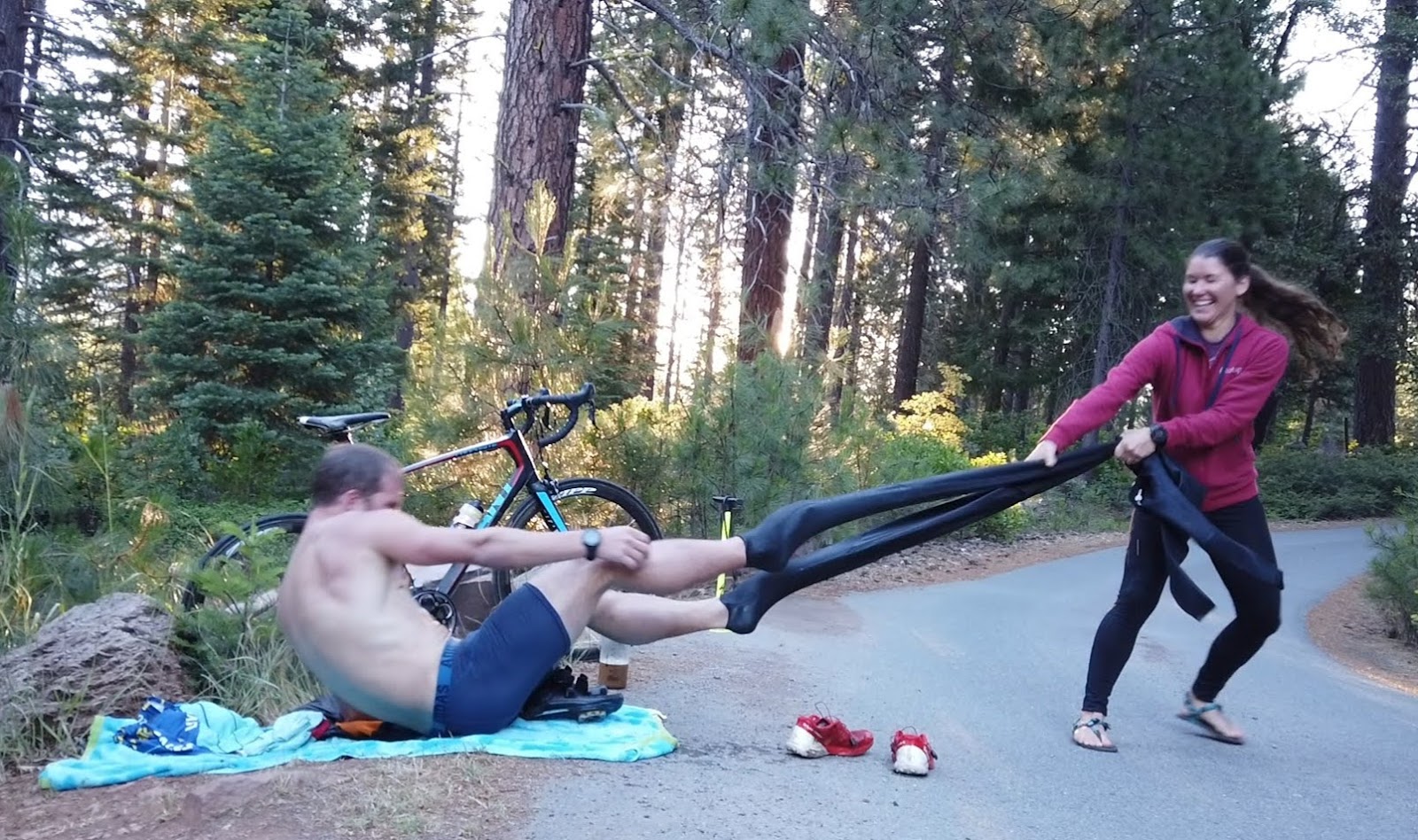 “You have to be kidding me” was my thought as I realized I was now in a sprint battle against the morning train. My thousand-some-odd watts [1.3 in horsepower] churning uphill pitted against those ungodly powerful diesel turbines [approx 6500 hp].

I didn’t win. But I also didn’t lose badly. It was only about a minute that I stood in my pedals, hand on the railroad crossing gate, or “ding-a-lingers” as we called them as kids. As soon as the last train car passed I surged through, back into my rhythm.

I looked over my shoulder at the train and thought, “If it was flat, I would have had you.”

After a few more intersections I was onto the A10 Everitt Memorial Highway, where the grade pitches up. Still battling the queasy sensations, I tried to stay light on the pedals. A bit over a mile up the A10, I got a honk and a wave as Max King and Chris Jones drove down the opposite lane, on their way to start their own separate FKT efforts on Shasta…this same day. I have a head start, “lets see how long I can hold them off,” I thought.

Each milepost of the Everitt Memorial Highway displays not only the mile but the elevation at that marker as well, you watch your vertical ascent displayed a mile at a time. You can decide if that is awesome or excruciating. 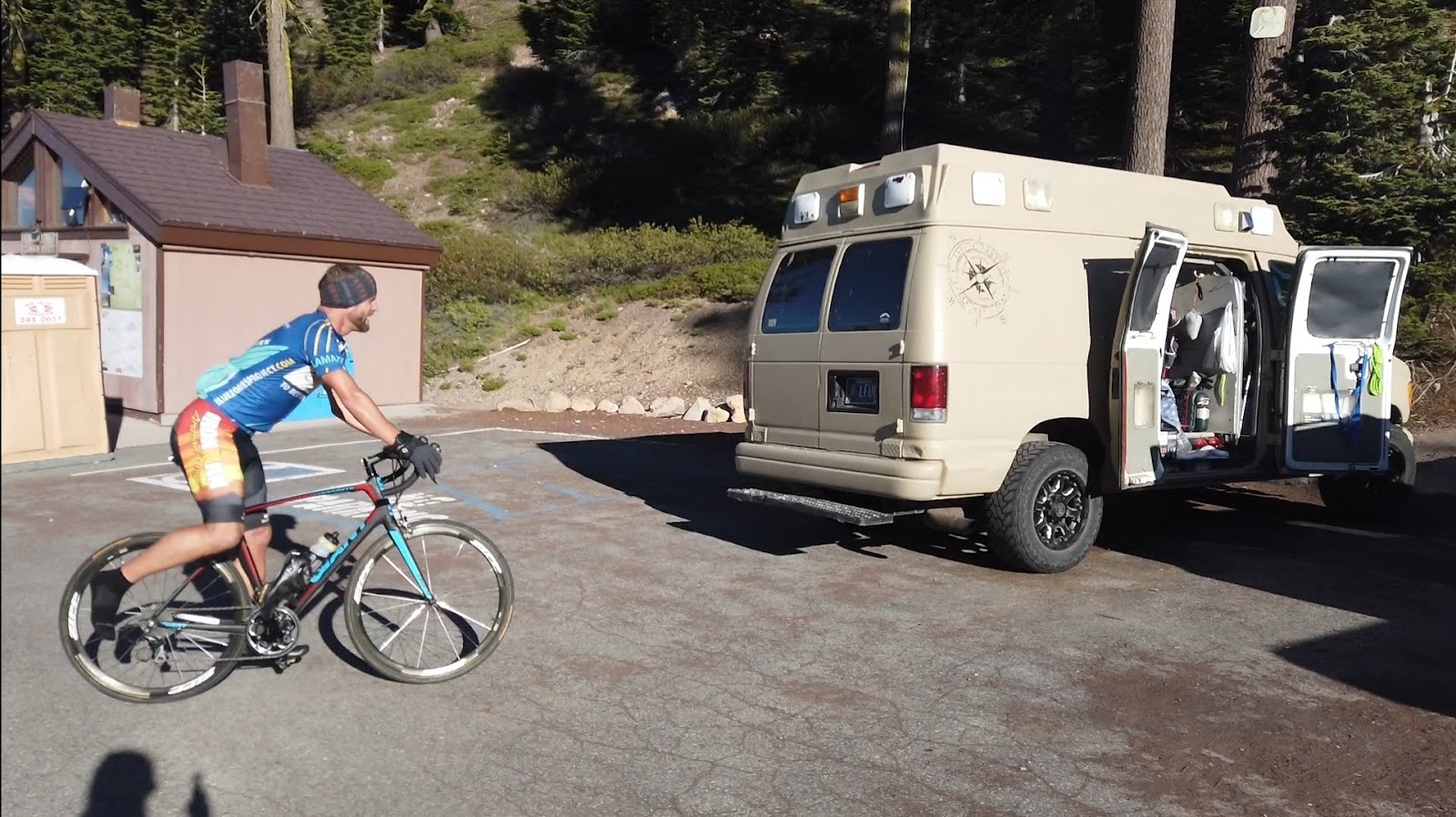 I downshifted and stood up on the pedals when Bunny Flat came into view. “Mt. Shasta, here I come.”

My van (actually a retired ambulance) was there waiting, staged with all my gear for the scree and snow ascent of Mount Shasta. 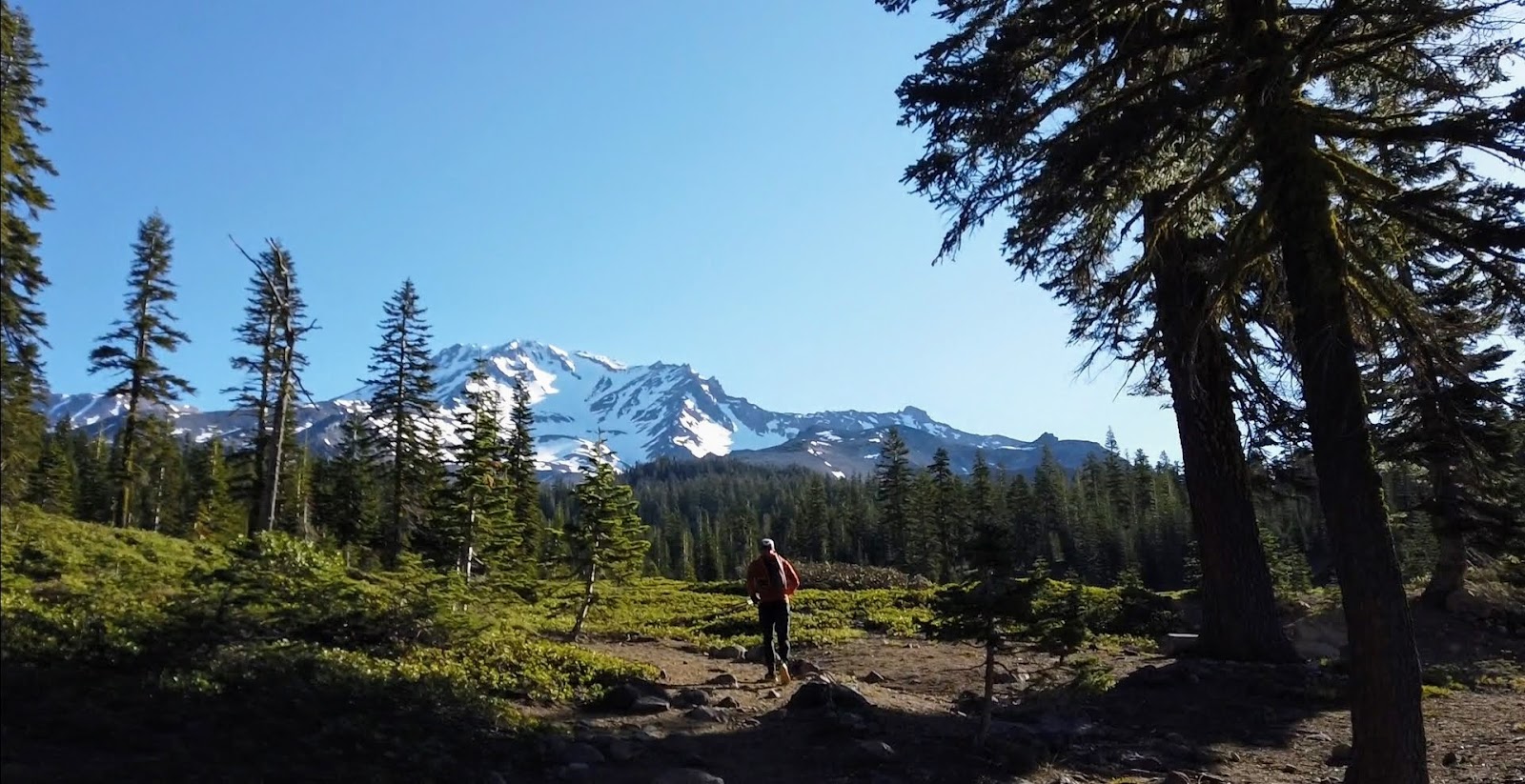 I was still feeling woozy from the morning swim, but had the mental game of holding off the legendary Max King and Chris Jones as long as I could. Hey, whatever works to motivate some extra speed. I pushed past the historic Horse Camp without missing a beat, or stopping to fill from the fresh spring. I hopped up onto the path of large stones, called Olberman’s Causeway, that are arranged to walk on top of to prevent erosion of the fragile alpine ecosystem. At a jog, Olberman’s Causeway always feels a bit like the old agility drill where the football players run their feet quickly through the tires, except it is almost a mile long and if you mess up you fall onto a rock with your face...oh, in case that's not enough the causeway is about 8000’ above sea level. 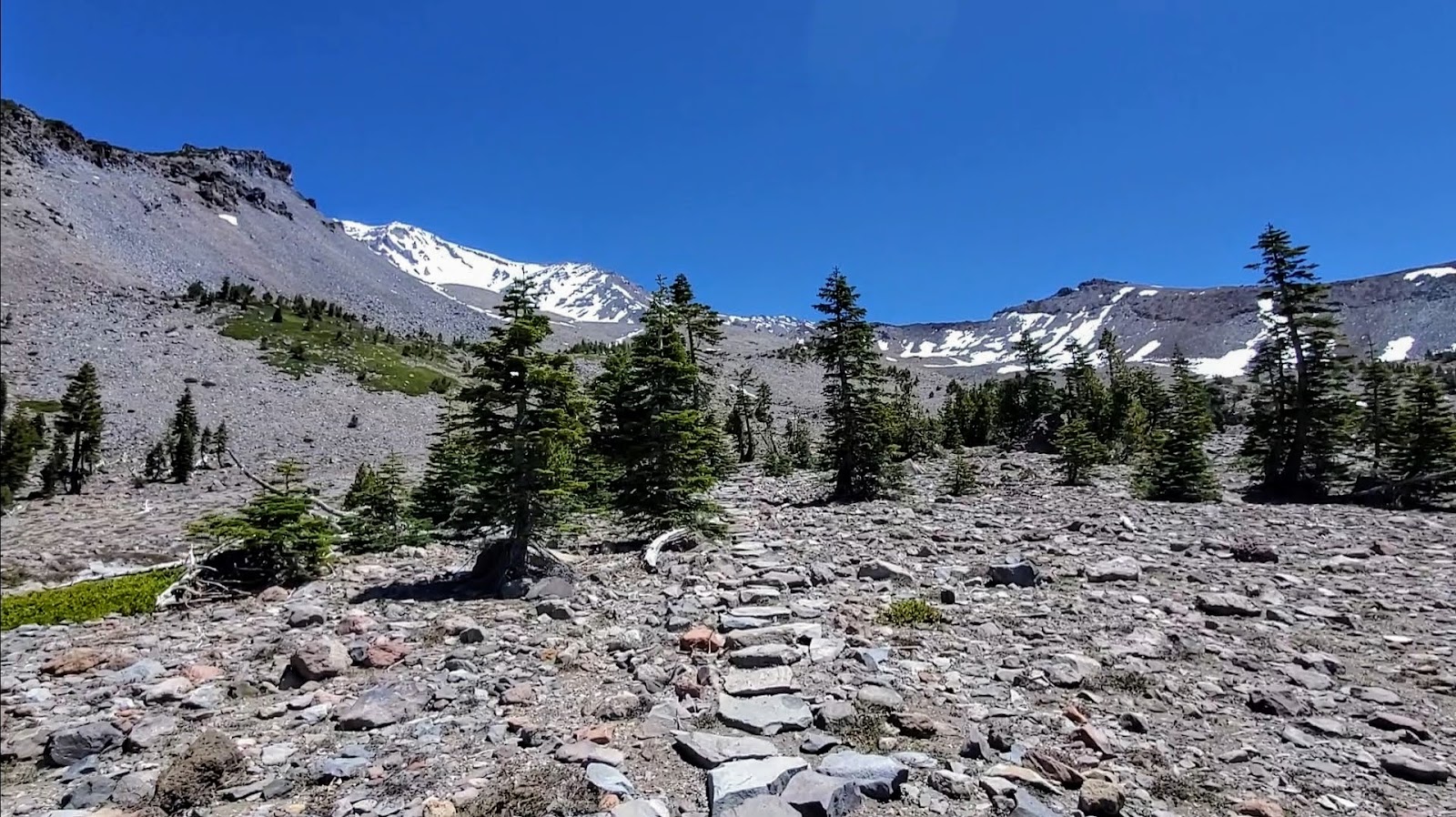 Clearing the causeway, I started up the scree switchbacks of the now melted Avalanche Gulch, the route gets significantly steeper here. Thinking of the day remaining ahead of me, I settled into a powerhike. As I approached the top of a rocky knoll, I glanced over my shoulder to see Max powering up the scree, still running, chasing an FKT of his own. Geez, unreal

As he approached, I let him slide by, “DUDE! You are crushing!”

“You too” he chimed back with his hallmark charisma.

I fell into rhythm with him for a bit. “Chris is about 20 minutes back on me.”

Finding his rhythm a bit too intense, I let him slip further ahead. I knew that if I was going to swim across an entire lake again after ascending the 7200’ this route requires, I needed to dial it back. But he had given me a bit of gold. Chris was 20 minutes back. Can I hold off a former pro-athlete until the summit with that handicap? 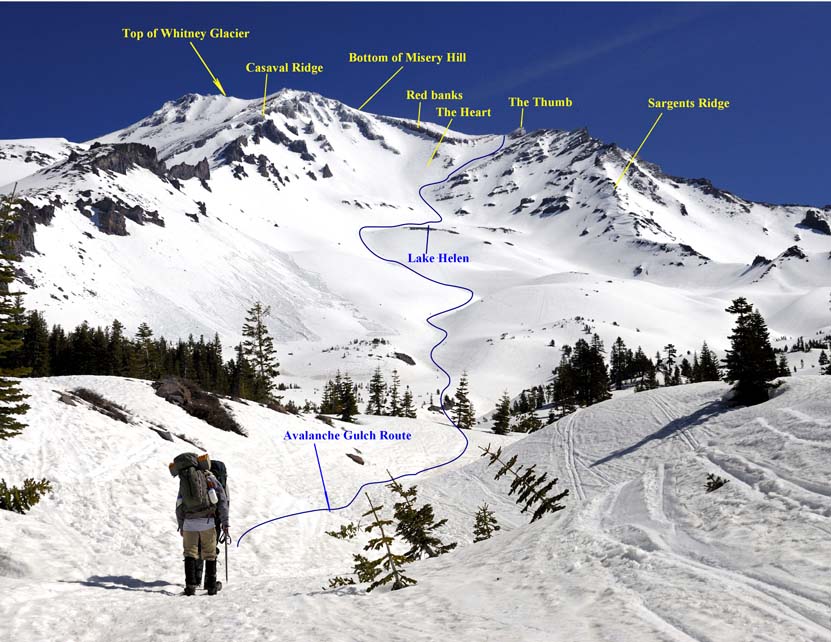 About this time, I was approaching where I would climb past “the heart” up to Red Banks, a stretch covered in icy snow that gains over 2,200 feet in less than a mile. As I looked up, I could see a multitude of climbers, some switchbacking slowly, others hunched stationary over their ice tools, and Max, also now power-hiking. To me, this stretch is the mental and physical crux. Many climbers get turned around by either the exposure, exertion, or elevation here. I grind on. Motivated. The air is notably thinner now at nearly 12,000’. As I approach the top of Red Banks, I let myself glance back. I am fairly certain I spot Chris below. I look down at my legs, “let’s go!”

I again find a jogging rhythm across the top of Red Banks on my way to Short Hill, as astonished climbers who are taking two and three day trips to reach the summit, look on. Having not one, but two, scantily-clothed runners pass you above 12,500’, where for some new to elevation it can be difficult to string a full sentence together at a slow walk, is a lot to take in. Some call out, “gee, you’re making us all look bad.”

“No way, what matters is we are out here in THIS! [I gesture to the immense views around us] who cares how fast or slow” I fire back. To me there is nearly no happiness to be found in comparison. We are all on a ball of water and rock hurling through space around the raging inferno of a nuclear reactor. Who cares who goes fast and who goes slow. It is about choosing the adventure that makes you feel alive. My adventures just happen to include choosing to be the one going fast.

“You’re an animal, Hardrath,” a climber clad in full mountaineering gear and facecovering chimes as I crest Short Hill transitioning again from powerhiking to a jog to get to the base of Misery Hill. I can tell they are with Shasta Mountain Guides from the insignia but all I can muster is a brief tongue out smile paired with a “Rock On!” gesture.

Misery Ridge, the final push through 13,000’ before the summit plateau, has its name for a reason. I have had my beard turned to a mass of icicles while pressing into a fierce February wind, but in my mind it has become a symbol of almost there, a final short effort before summit glory.

No misery from the mountain today, so I was making my own. I surged yet again into a jog as I broke across the summit plateau toward the final summit block. I always think how amusing it would be to organize a football or soccer game up here. This flat expanse of snow and ice within a hair of 14,000 feet above sea level. Imagine the experience, both for those playing and the climbers who stumble upon them. The thought never fails to amuse me.

“Is that Jason?” another voice questioned as I am managing my experience with the pain cave.

“Guilty as charged.” I pop back through a smile, again unable to recognize them through their gear, or maybe it was the haze of effort, couldn’t be sure at this point.

I didn’t even look back. I just followed the steepest ascent line to gain the summit. I think I passed a few people here. I think they were nice. 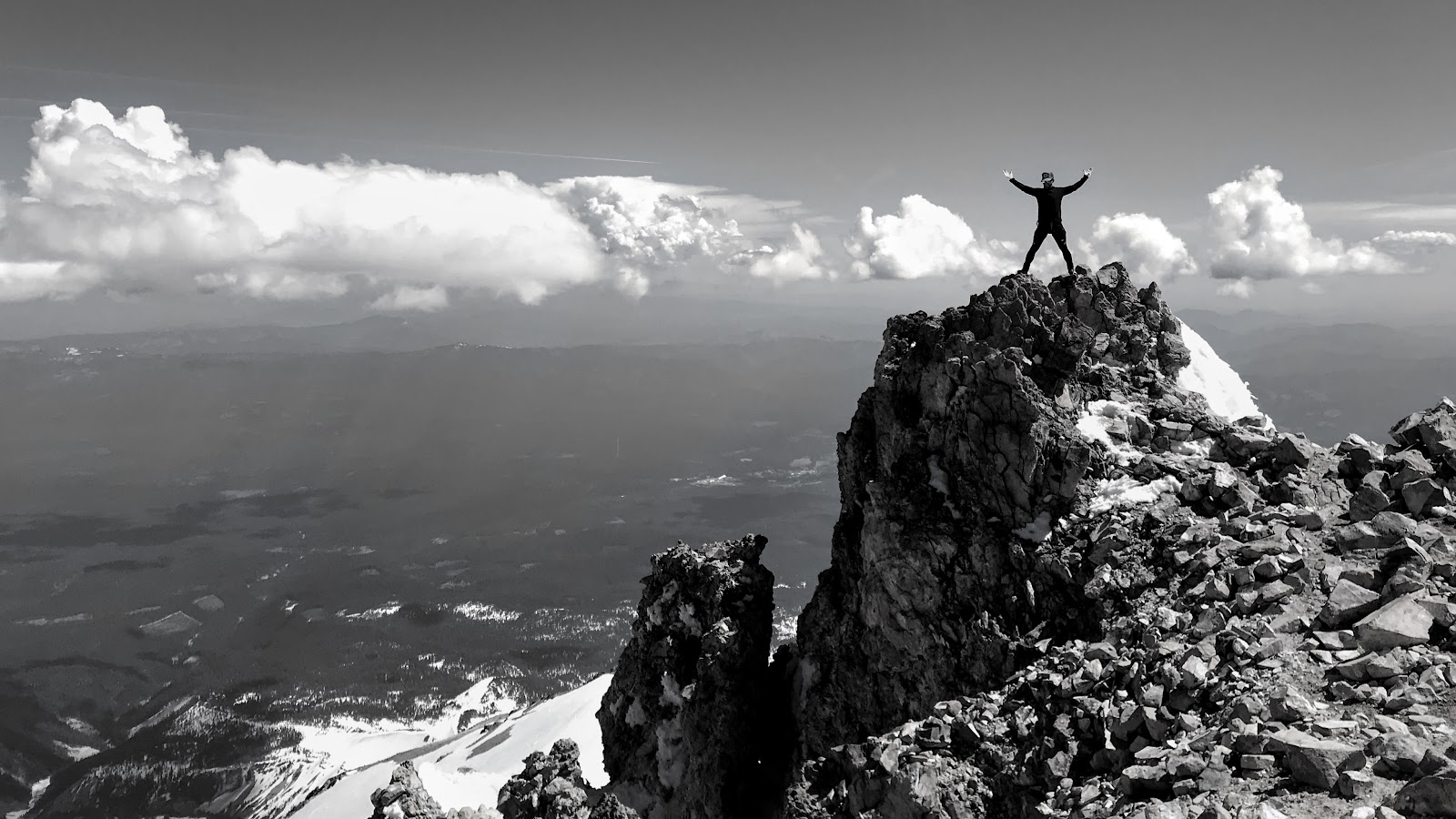 YES! I voiced mentally as I felt the stoke. Call it silly. It wasn’t really about staying ahead of Chris, it was about the meaningful engagement in those moments of life where I was finding out if I could. It's a small difference, but it's all the difference in the world...the difference between allowing our interactions with others to cause us to rise to be better versions of ourselves, or just trying to tear others down so we can feel safe being stagnant as we are. What is life except a series of small meaningful moments, call them games, we make for ourselves.

I snapped my summit photo, completely forgetting to film any content for the video I was capturing of the effort, and started my run down, high-fiving Chris as he hit his final steps to the summit.

I now needed to reframe my mind. I had gone hard up. My second fastest ascent from Bunny Flat ever. I needed to let my body rally for a bit while still covering ground. I was happy as I stepped onto the snow at the top of Misery Hill to find it softening from its earlier, icier state. From years of experience on the mountain personally and as a guide, I knew I would be glissading very soon. Glissading is essentially a fancy word for sledding on your butt down a steep mountainside. If you learn proper positioning, you can imagine yourself on a lawn chair relaxing...unless you’re scared of heights, then it is terrifying. Remember that 2,200’ in a mile, that was a bobsled run.

I sloshed through some softer snow below, almost postholing off and on in an effort to move fast. I was ecstatic to rejoin the scree trail right when I did. I kept my pace metered as I cruised through switchbacks.

Then back to Olberman’s Causeway. More agility drills. Come on legs, let's not fall now.

The trail below Horse Camp is a blur. I remember making it back to the van. Ripping off mountain gear. Throwing on cycling gear. Grab the bike. GO!

It felt great, I felt strong, stroke gliding with kick timed in unison. As I swam back across to my starting point, I took my breaths to my right, side sighting off Mt. Shasta herself, shining in the sun. 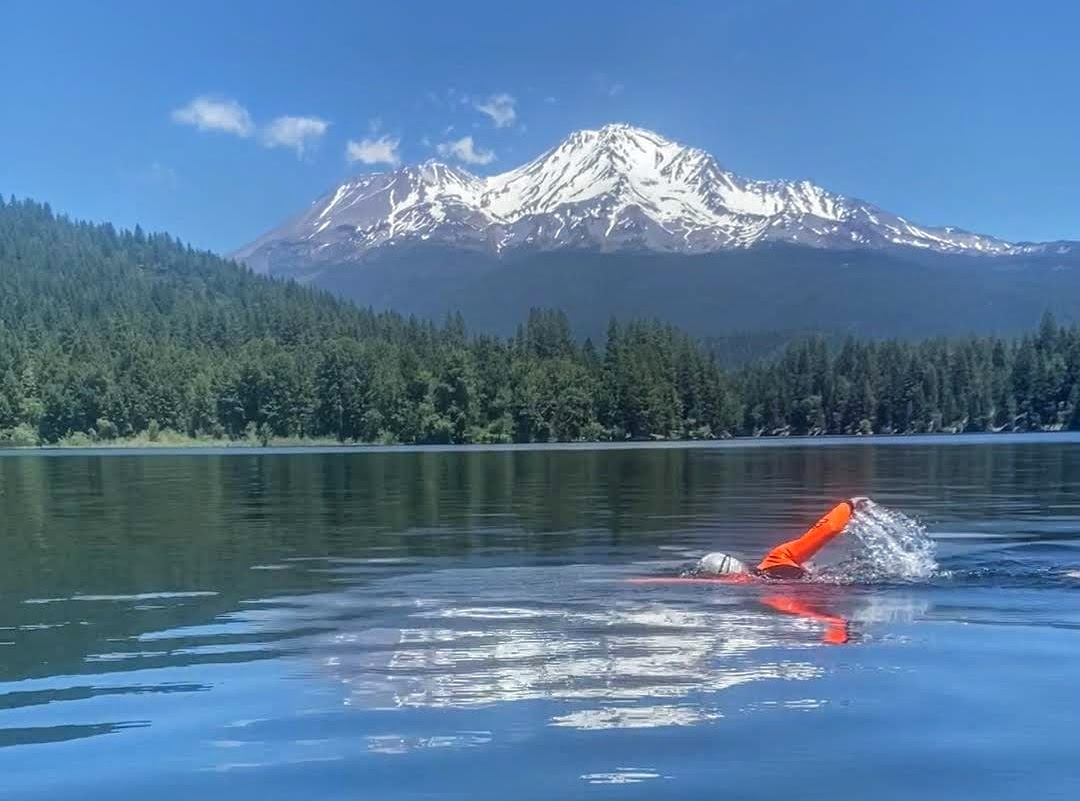 I allowed myself to internally verbalize for a number of strokes as I sighted the top of her. The cramps did come, I powered through. Determined. Also, safely accompanied by two friends on paddleboard and kayak, capturing film of the final swim.

I stumbled a bit on tight, cramping muscles as I stood out of the water for the final short run up to the green gate, but I ran.

My hand tagged the gate. 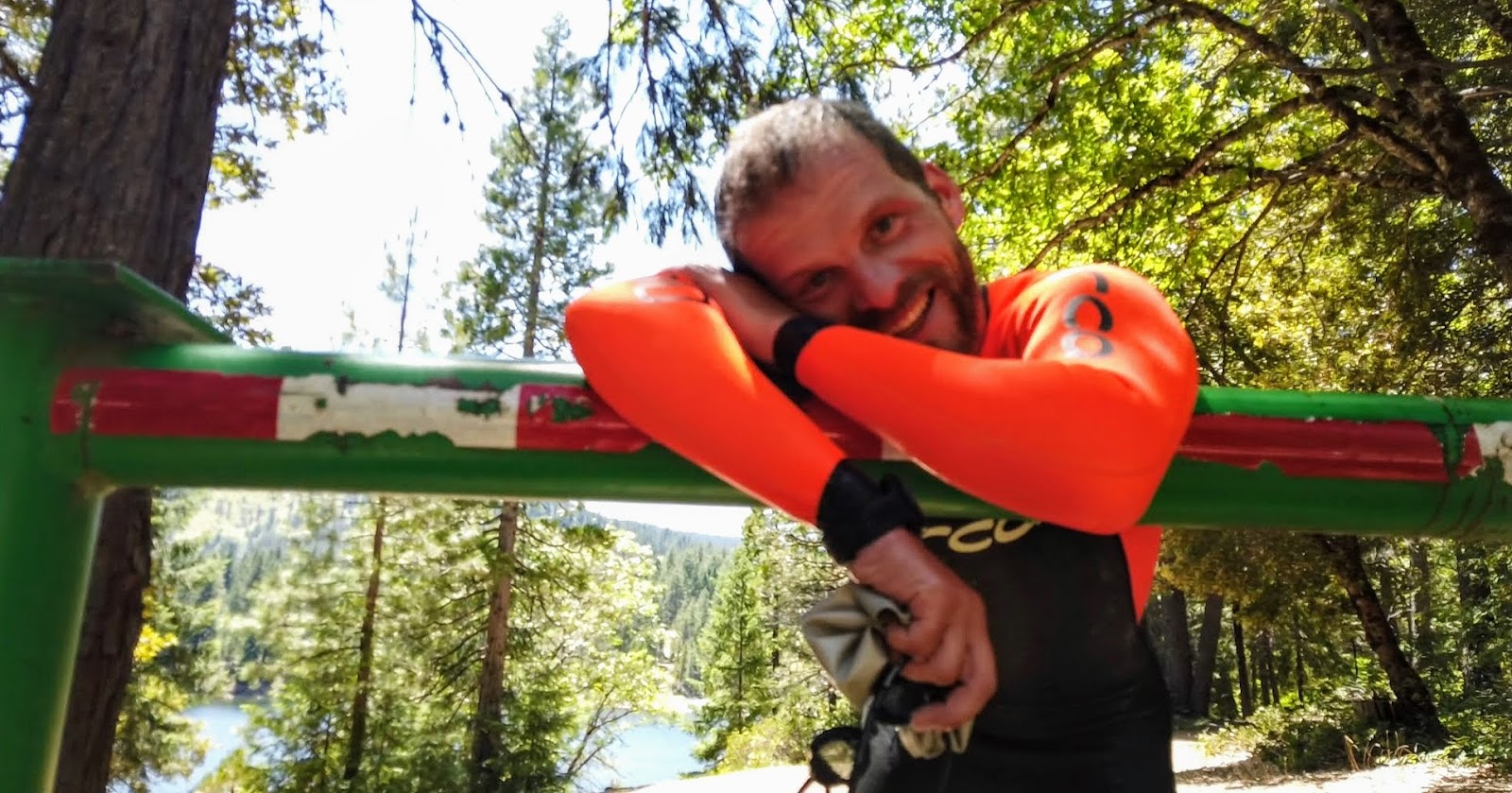 And my finger pushed the button. As I heard the chime of the day ending, I threw myself over the gate. 8:25:30 was the time elapsed. I was pleased with the day. Pleased with a new FKT route that would be called the Shasta Picnic. Pleased with bringing a bit of creativity from my mind into actualization for others to come try.

So as I crack into my ABC Cerveza Athletica, I have to ask…