This is a marked trail that follows the canal towpath from Coventry Canal Basin to the city of Oxford comprising the first 5 miles of the Coventry Canal and then the full length of the Oxford Canal (78 miles). It is a very scenic and rural route which starts and ends in the cathedral cities of Coventry and Oxford. It passes through the counties of West Midlands, Warwickshire, Northamptonshire and Oxfordshire.

The canal takes you from the beautiful university city of Oxford to the three spires of Coventry. The southern part of the canal remains largely unaltered for 200 years, its winding course untouched by mid-19th century straightening programmes. This section is dotted with simple black-and-white lift bridges.

The Oxford Canal Walk is a long-distance route, following the towpath for 83 miles. Characterised by the gentle engineering of the canal, with few lock flights as it meanders through the beautiful English countryside. The Oxford Canal is among the earliest of cuts in the canal age. It was initially designed by James Brindley, succeeded by Samuel Simcock and Robert Whitworth after Brindley's untimely death in 1772 at the age of 56.

It was opened in sections between 1774 and 1790 with the purpose of bringing coal from the Coventry coalfields to Oxford and the River Thames. The canal formed part of Brindley's grand plan for a waterway 'cross' linking the rivers Thames, Mersey, Trent and Severn. 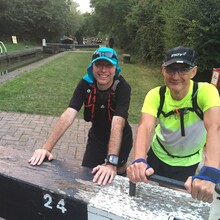 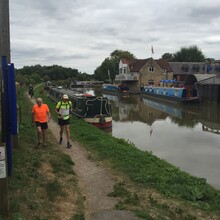 Status: Not yet started

On Friday, July 10th 2020 at 05:00am BST I will be starting an attempt to complete the Oxford Canal Walk supported. My only support I will have will be my running companion, Andy Day, who is running the route with me. We will stash a drop bag to re-supply around the half-way mark and we will use the water taps along the canal for refilling our water bottles. We will start at Coventry Canal Basin and we hope to arrive in Oxford city centre before 10pm on the same day.

I will be tracking the run in two ways; (1) via my Garmin Fenix 3 watch, which will then be uploaded to both Garmin Connect and to Strava; and (2) via a Live Tracker supplied by Race Director. I will update this page with a link to the tracking page at Race Director before I start and the link to my Strava profile is below. We will take pictures during the run and I will post them to my Instagram and Facebook pages during or directly after the run is completed.

There are two points where the towpath is closed for essential maintenance on July 10th, 2020 according to the Canal & River Trust website, who are responsible for the maintenance. We will be taking detours that are slightly longer than the towpath route in both cases.

Here is the live tracking link from Race Director. This will be live on Friday 10th July from 5am when we start.