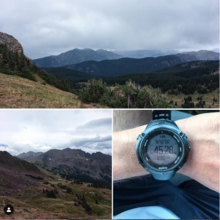 Parked at the Copper TH and caught a ride from a kind friend up to the Surprise Lake TH, getting started a bit after 8am. Cool temps in the morning, but the rain from the night and day before led to some early humidity. Got a little shook up after taking a lovely tumble while descending around mile 10 that led to laying face up with my legs curled over my head, but luckily just a could scrapes and bruises in the end. Hit the ascent up to Eccles pass feeling good, and a mix between power hiking and running made for a nice climb. Last 30 minutes of the ascent were in some sporadic freezing/cold rain. Luckily it died off and skies started to clear as I hit the pass, with the drop in temps and a bit of percipitation feeling refreshing in the end. Passed a hiker who politely asked me to take a picture of her as I was descending Eccles. I figured, welp, I'm making good time, an extra minute pause shouldn't hurt any chances at getting the FKT. Little did I know this was going to be a well orchestrated, fix my hair, make an epic pose with my back to the camera looking out over the mountains - Instagram worthy photo. She was kind of enough to also give me some hand sanitizer after touching her phone to alleviate any possible Covid transfer...(side note: no luck finding said photo after searching Instagram for #epic #hiking #epichiking #adventure later that day). Uneva Pass ascent felt solid, and took a pause to chat with a hiker about "how the hell do you build up to running that far" on the way down. Overall, felt good throughout the day. Thought for a while under 9 was in the books, but ended up with a little extra mileage somehow (maybe because Suunto being Suunto ?), so calmed the effort a bit to not destroy myself once the mental calcuations made it clear the FKT was more likely than not. Overall, a great trail to challenge yourself with, and it was a spectacular way to get a tour of a chunk of Summit County. A bit technicial at times and a few somewhat overgrown strected made for a bit higher effort to pick up some speed, and big climbs at the end make for a nice lil kick in the rear just as the fatigue starts to settle in. Immediately drove the hour back home to Golden, CO and ate many slices of homemade pizza. Who coud ask for a better day?

nice job, mark! we are taking a swing at terminus to terminus Gore Range tomorrow!