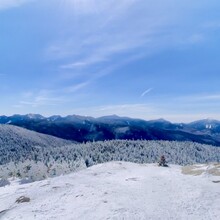 The trail is packed with snow. I wore microspikes over my La Sportiva Kaptiva GTX.

I started at a steady pace. 2 parking lots were filled. Everybody I encountered on the trail gave me enough room to pass by. Everyone was so friendly! There were about 15 people on the trail and one dog that wouldn't move lol. I kept a good steady pace going up--leaving me enough energy to send it down! I went to Cascade first then over to Porter. The down hill was fast!! I checked my watch periodically.

There is definitely room for improvement on this FKT...get after it everybody and enjoy!!

Admin Note:  The NY DEC requires snowshoes or skis in the High Peaks Wilderness if snow depth exceeds 8 inches.  Jason reported that this high traffic trail was well packed down, and likely there was less than 8" of snow on the trail, as there was "dirt and ice in most spots and the top had a lot of bare rock".  Jason had snowshoes but did not need them to avoid postholing (which appears to be the intent of the rule) since the trail was solid.  "I was ready and willing to turnaround if postholing did occur."  It seems to us that Jason's run conforms to at least the intent of the law, if not the letter.  As always, we encourage adherence to all local regulations.

The Cascade and Porter trail is the most trafficked trail for Adirondack High Peaks. It is very well known in the High Peaks. It is a beautiful trail!! In the winter on this date, I really don't know if there 8 inches of accumulated snow on the actual hiking path. With the heavy traffick, some rain, higher temps, sun, and lack of snow, the trail seemed to have a thin enough layer to only need microspikes. I had snowshoes with me but I left them behind due to no postholing throughout the whole trail. There was exposed dirt, exposed ice, and exposed bare rock.

I'm sorry if I misunderstood the local regulations. There is not a lot of clarity or instruction when it comes to this regulation. There is no law citation listed on the DEC website--it just says they are required in 8 inches of snow? Is there 8 inches of snow on this trail right now--Maybe in surrounding areas but on the actual trail? Does the regulation pertain to the trail that people would be hiking or to the mountain as a whole? Should there be a notice posted at the beginning of the hike if they are required so all hikers are made aware? Is there more information on this subject? actual law that gives authority to require snowshoes? This is my first year in the Adks for the winter season! I have never winter hiked or ran before! It has been amazing!!

I hope to keep learning how to respect the land in all seasons :) I truly love the Adks ! thanks for your help everyone!! It's all for the sheer joy of climbing ♥️

Never winter hiked or ran prior to this 20/21 season**