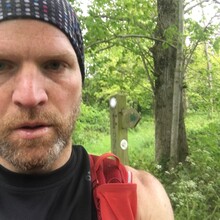 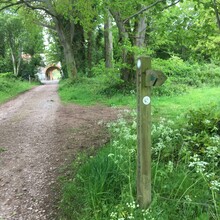 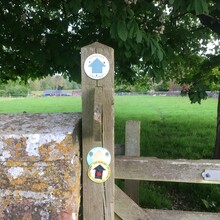 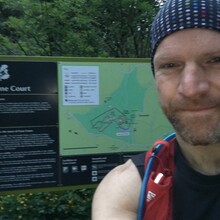 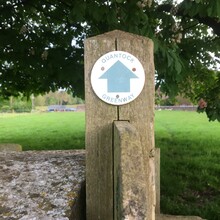 Yesterday morning I undertook the Quantock Greenway Figure of 8 loop starting and finishing at Fyne Court in line with the current FKT.

Set off at 5.15am and carried all supplies on me. Given the humid conditions, running out of water wasn't a likely risk. Running from Fyne Court towards Cushuish, it was soft underfoot and as wet as at any point on the course. I made steady progress for the first hour and kept to the green 'Quantock Greenway' waymarkers throughout. The waymarkers take you via Toulton Farm and Cothelstone Manor and Church along bridleways and fields rather than the road to the west.

I'd considered leaving a cache of supplies as Ashley had done in Triscombe, but felt confident in my minimal fuelliing strategy. Walked up past Triscombe quarry and told myself that I was likely to be back there in 3 and a half hours' time if my run went to plan. Started the northern loop at Keepers Cottage where the route goes in two separate directions. I found this section the most technical and tough through to Holford. The section comes to a stunning end when you emerge from the woods to views over the English channel. Dropped down to Holford and from there bears all the hallmarks of a coastal path with all the ups and downs to West Quantoxhead.

The halfway point is shortly after West Quantoxhead. Energy levels were good without being brilliant. Signage along this section is excellent and you are directed into Triscombe along the lane from Crowcombe. The weather started to worsen slightly once I hit Triscombe for the second time. I continued past Keepers Cottage to the Quantock Lodge gate. On previous recce's it was clear that the only signage at that point is the green arrow on the other side of the gate, which clearly directs you on the footpath to the north of the gate.

Navigation from there is relatively straightforward. I was very glad to have familiarised myself well with the last 10 miles of the route, as it would be very easy to stray off course. My pacing was steady throughout. The muddiest section was after Enmore and before the last big climb.

Such a stunning and varied course with very few flat sections. Really benefits from getting used to the signage in the flesh. A good mix of fields, bridle paths, footpaths and country lanes.

Regional Editor: I have flagged this FKT simply because there appears to be a stretch missing in the south-west corner and I can't be sure how long this part is.

That makes complete sense, as the previous FKT holder continued on the roads in the SW section. I ran the section in line with the markings and the written instructions for the section: Broomfield to Triscombe - Quantock Greenway (quantockonline.co.uk).

The instructions on that section read as follows: 'From Cushuish take the quiet country lane, heading north-west (pic6), until you emerge opposite Cothelstone Manor (pic7). Now take the footpath across the field to the left of the manor, passing in front of some of its buildings and the entrance to the church (pic8). Head across the parkland towards the three poplar trees. The footpath meets a lane just south of Terhill. Follow the lane north to Terhill, ignoring the footpath opposite (pic 9). Continue along this quiet lane for just less than 1km and take the footpath on your left, leading to Milton Farm on the outskirts of West Bagborough (pic 10)'.

There are green marker signs along that stretch including three that guide you up through the Church yard at Cothelstone. The route is shorter (somewhere between 0.5 and 1 mile I'm guessing) than the route that Ashley took. Where the two paths diverge at the meeting of Ball Lane/Cushuish Lane there is a green marker that points you along Cushuish Lane. This is clearly visible on the google streetview image of the lanes.

Hi Tom, that’s an impressive run, great work. I’m interested to understand how much water you carried from the start, as you imply that you didn’t take any from streams along the way. As someone who gets through about 750ml/hr, I can’t imagine running 6.5hours without supplies en route! (But I do sweat a lot!). Cheers, Steve

Hi Steve, thanks. Sorry, I’ve only just seen the message. I was able to do it with 2.5ltrs of water in my bladder/udder combo. Didn’t have a lot left at the end but it was enough to see me through. Time of year and cool temperatures helped.