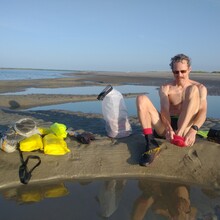 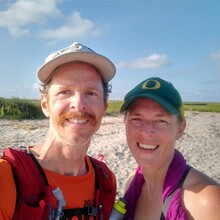 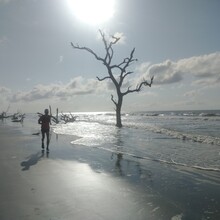 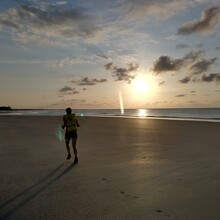 I (Nathan) wanted to create a route that would highlight the uniqueness of these islands which can only be accessed by water. My father grew up on a South Carolina barrier island, and Katie and I have loved visiting these beaches for years.

Given free rein, we would have tackled this route in October when the water is still warm but the summer heat has passed. But July is when it worked, so July is when we went. We started our run in the dark with headlamps to reach the first swim around daybreak and low tide--to put our running on firm sand, to avoid swimming in the dark, and to swim at slack tide when we wouldn’t be pulled by the current. Running at dawn was gorgeous. We had the beach on Isle of Palms to ourselves, which was a stark contrast to our return later in the day. The sun rose as we were swimming to Dewees Island, and we felt encouraged after this first successful crossing. The Dewees run was short (2.5 miles) and pleasant, as was the swim to Capers Island. We enjoyed running the boneyard beach on Capers and having the island to ourselves, watching crabs and sea birds scurry away. The north end of Capers was a bit tricky, with a creek and tide pool system that required us to cross about 100 yards of vegetated dry dunes in order to continue around to the very end of the beach by Schooner Creek. Capers is close to 4 miles one way. We walked and fueled for a while after the turnaround, facing back into a refreshing headwind. All went well on the return, though our transitions slowed as we fatigued. Also, the tide was rising powerfully during the two return swims and we had to angle our swimming against the current to avoid being carried beyond the beach and into the marsh and oyster beds at the back of the islands. Returning to Isle of Palms was somewhat jarring as the beach was now filled with shelters, umbrellas, sand castles, and beachgoers. The 5.5 miles back to the pier felt long and hot, and we were delighted to hit the showers at the adjacent county park shortly after tagging the pier. We found this route challenging and rewarding. The lonely beaches were wonderful, and the swims were mentally engaging and physically refreshing.

This route could be done substantially faster. We had no real experience combining swimming with running, and our transitions were slow. A more advanced speed attempt would probably involve swimming and running in the same gear. In July, the heat and humidity--and the liquids required--were a considerable drag on our pace. In total, we ended up swimming for 1 hour, running for 4:05, and transitioning for 1:10.

Gear and nutrition
We chose gear to protect from sun and jellyfish, minimize chafing (salt, sand, and sweat!), and provide a degree of safety in deep water. We both wore trail running shoes and Nathan added light gaiters. Katie swam in a long-sleeve rash guard shirt; jellyfish encounters are somewhat common in these waters--most are manageable, but the occasional Portugese man o' war could be a real threat. Both of us swam pulling inflatable swim buoys to transport our shoes dry with an additional dry bag for our vests. A single 20L dry bag per person would have been enough space for shoes and vests--with a tether for hands-free swimming. We each carried a variety of snacks and about 3L of fluids--this was enough, though not an overabundance. Katie carried a basic type II PFD life vest, which let her approach the swimming with confidence. I did fine swimming without a life vest, but the number of contingencies covered by wearing a flotation device should make it a consideration for anyone attempting this route. We had several motorboats pass through the inlets as we were swimming them, and we were glad to have the fluorescent swim buoys to hold vertically to increase our visibility.

I'm so glad I attempted and completed this adventure. It was fantastic. A few things to add to Nathan's report: