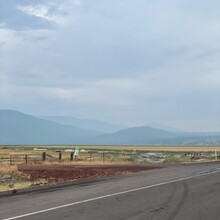 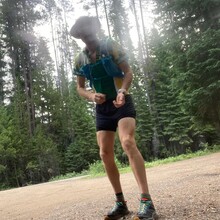 On the morning of August 1st I drove to Brown Mountain Loop Trailhead to take a stab at one more Oregon FKT before I head to visit KY family for almost a month! I ran FKT attempt clockwise, but before I started I actually ran out and back starting in the opposite direction for a touch of a warmup, since I was using today’s run as a workout in preparations for upcoming debut 50k in less than 1 month!
As I started uphill on the actual FKT attempt I gave more effort than ever early on. I wanted to attack the 1st climb of 2+ miles & see if the following downhills would bring on recovery even when gravity brings on faster paces, & plan worked out for me. A few sections of rocky footing on approximately miles 5-8 brought on early fatigue. Even tho a lot of that was down grades, the “ol trail-2-step”, or the “tip-tap-toes without any OH NO’s” proved to be more important than I thought. Goal was truly to not have any miles over 9min, but that 8th mile had a touch of decent grades uphill & 1 single fat tree laid over trail by a switchback in 2 spots. Going uphill & combination tree girth caused me to take the super safe momentum killing steps over each. When I saw the next split was over 9 it helped me to release the sub 9 thought & keep things safe til I got off the PCT section of trail & on the faster terrain of the last 4 miles.  That mind is powerful & even tho I settled in, I didn’t get over 9 anymore. When I hit small chipped gravel path that reminded me of Western KY University’s home CC course at Kereiakes Park, (where I ran more in High than my short stint at WKU😬) I encountered a couple of bikers who were older than me & we shared a few quick positive vibes.  We crossed paths a few times before I finished & they shared positive motivation that I needed as I tried to end the route with a bang!  ZERO slip, trips, or falls is always a win at 41 years old;)

I ran completely solo & packed 1 500ml Soft bottle of water, & 4 salt tabs in my vest. Still had a little water to spare at the end, but not so much spring in my legs! I passed multiple hikers on the PCT & multiple mountain bikers on Brown Mountain Loop, but only positive words were shared.  There was some smoke in the air after recent & local fires have sparked up, but I couldn’t smell it along the trail & I don’t think it had any negative effects on my performance. It was a touch overcast which caused some lower temperatures, but elevated the humidity a bit more than the normal in this area. The Lord blessed me with a couple rains drops, but nothing consistent or heavy enough to need any eye protection.
I kept moving for the entire effort & didn’t miss any turns (BIG SHOCK), but somehow always seem to come up with just a touch more distance than the current FKT holder. I’m totally cool with that, cuz it helps me feel more official. I didn’t take any pics on the move today, but submitted a pre run selfie & a shot of smoke in the air as I left Klamath Falls headed to the trailhead.    Altogether, it was a great day!!

(Hopefully you will see me submit a few FKT’s that aren’t on the West Coast in the next month!  Holler if you need any more information & thanks for all the work you do that helps push me & others on solo or “non-race” missions!🙏👊✌️)