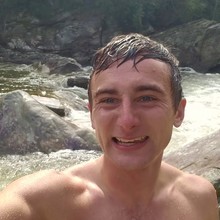 Starting at the Wolf Pit Trailhead, ascend the trail to Shortoff Mountain. From there, continue along the Mountains to Sea Trail to the summit of Table Rock. Descending Table Rock, cross the Linville River at Spence Ridge. Then, follow the Linville Gorge Trail back to the Mountains to Sea Trail. Cross the river again, and then make the last climb back to Shortoff, and then head back down to the parking lot.

I got to the trail head around 8:45AM, and ate some breakfast Skittles. Upon making the first ascent, I realized I may have overdone the pre-run feast. I felt pretty sick the first hour and a half, but the amazing views of the cloud inversion helped move me along. Rain from the day prior and that morning made for a muddy trail during these miles. I would find out approaching Table Rock, that the rocks of the trail were also quite slick, and not suited for quick travel. I may have slipped and fallen a few times.

I got to the top of Table Rock within 2 hours, and made my way to the first river crossing. People normally cross when the flow is less than 200 CFS, and I noticed that the level was high upon reaching the river. At the trail head, I checked online and the flow was 211 CFS. I would later find out that the rain from that morning would reach the river once I had started on my journey, and quickly get to nearly 500 CFS that day.

After some deliberation at the river's edge, I made the decision to swim the 20 yards to the other side. The water was quite refreshing, and I nearly got sucked down a rapid. The river was surprisingly strong, and when I started to drift closer and closer to the rapids, I switched from a doggy paddle to an enthusiastic freestyle stroke. Reaching the other side, and with the exciting part over, I made good time down the Linville Gorge Trail en route to the second crossing. I got to the second crossing about three hours later. This one was much less eventful, being about 45 yards across. The water only came up to my waist as I waded across.

The final ascent back up Shortoff made for a good challenge on tired legs. Once I got to the top, I realized I only had 11 minutes if I wanted to make it under 6 hours. I raced down the last 1.1 miles and dropped 800 feet in 9 minutes to finish in 5 hours 58 minutes 03 seconds.

I have been looking forward to doing this FKT since July of '18, and am happy to get the chance to run it. After an injury that forced me to DNF at mile 84 of a 100 mile ultra, it took me 4 months to get to the point I could start running again. This FKT was an exciting adventure in a place I consider home. I plan on putting a short video on YouTube about this FKT, as a way to bring this route, and FKTs in general, to more people's attention.