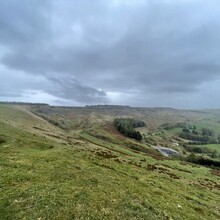 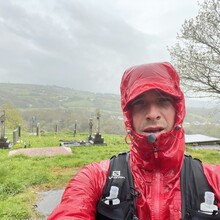 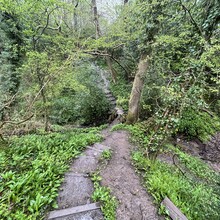 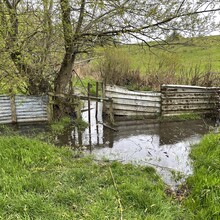 Don't be fooled by this starting in suburbia, it's a tough route with some awesome scenery and very runnable trails (if it's dry - it wasn't today!). Unfortunately the weather wasn't on my side and can only be described as 'diabolical' so made it hard going underfoot with needing to take care on most downhills.

I will be revisiting this after we've had a dry spell though no doubt, as it's a route I had no idea existed but am thoroughly impressed by. I have a bit of a love for semi-urban trails as well as the Peak District so this was perfect for me. That's not to say that approaching Cown Edge itself, it didn't get wild and gave you a full-on taste of the Peak District.

In terms of nutrition, 2 soft flasks of water were enough as well as a couple of gels and flapjack bar.

Note: the GPX track that was submitted on this route page is slightly wrong climbing Werneth Low. I followed the CEW sign posts on a parallel path.

Having thought about this a little afterwards, I wanted to add that my attempt was South to North (Hazel Grove to Woodley). I suspect that it is faster the opposite way as it's net downhill but there's no option for this variation on the course page.