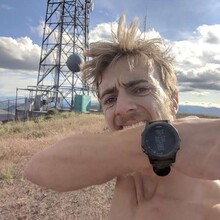 I took the same route as Chris Coppola, the direct route up and the slightly longer route along the ridge down. The ascent took me 25:38 and round trip took 38:39. I started and stopped my watch at the rickety gate the trail goes through about 10 feet off of the road. I think the highest point is probably inside the fenced off area where the big radio/cell tower is but I went just past it to ensure I didn't cut it short, again just about exactly what Chris Coppola did previously. The only other soul I saw out on the trail was a rather surprised and rather large rattlesnake just before reaching the ridge line on the ascent which I think actually gave me a good kick of adrenaline.

As you will see in my gps track on Strava, my watch had a bad glitch early in the ascent. Unfortunately, I did not notice this or I would have just stopped and started over as I wasn't all that far into the effort. I would completely understand if this doesn't count as an official FKT due to this glitch but the GPS track still shows where I started, when I got to the top, and when I got back to the trail head. It shows the descent route correctly and nearly all of the ascent route as well. The part of the ascent that glitched is very easy to understand where I actually went if you essentially erase the obviously glitched part. Again, I completely understand if this does not count as an official FKT but in my mind all the information is here to verify I went from the bottom to the top in 25:38 and RT in 38:39.

Big thanks to Chris Coppola for putting this route up!