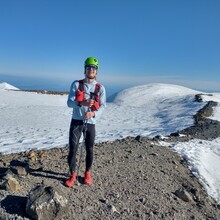 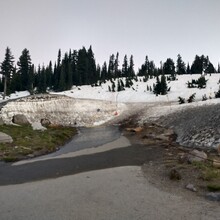 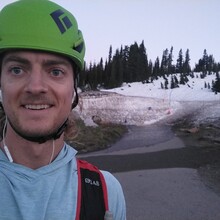 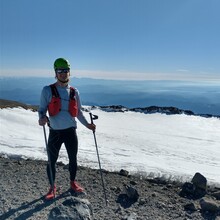 Trip report is copied below:

I have been dreaming about this one for years but really struggled with wrapping my head around the fact that this record was even in the realm of possibility. In the weeks leading up to this, the doubts were overwhelming. But as they say, “fake it till you make it”.

I started my day at 4:57am, coincidentally the exact same time that Uli Steidl, the previous record holder and absolute legend, started his day. I was planning on starting closer to 4:00am but having forgotten my headlamp, I had to wait until the day provided me the light I needed. I started from the pavement a few meters before the famous ‘John Muir Stairs’, where the typical start point is, due to the fact that they were still buried by a substantial amount of snow.

Starting up the still soft snow, my heart rate essentially immediately redlined and I thought, “oh god… this is going to be a long day… why didn’t I wait for the snow to melt. Why didn’t I wait until this turns into a fast, dry, nicely manicured trail. Why do I have to be running in slush…”. Previous records on Mt. Rainier have been done significantly later in the year, in large part due to the fact that the trail from Paradise to the Muir Snowfield is dry and fast. During my effort, the large majority of it was still under snow so I ended up getting maybe a quarter mile of dry trail tops.

About 15 minutes in I finally found a decent boot pack where the snow was a bit harder and made the going substantially easier. I had Uli’s split from where the route crosses Pebble creek, he made it there in 31:23, I got there about a minute behind in approximately 32:30. I knew it would be almost impossible for me to keep record pace on this first section given the snow factor so I tried my best not to get discouraged and keep pushing with the thought that I could make up time higher on the mountain.

Once on the Muir Snowfield I found a good rhythm, I found my flow. The snow had firmed up and I put the body in cruise control. In Uli’s trip report, I saw that he spent about 5 minutes at Camp Muir, I assume using this time to change into his summit gear. Given the fact that I was going unsupported and was already wearing all my ‘summit gear’, I knew that if I could make it to Muir at about the same time he did, I would be putting myself in a really good position as I would run right through camp putting me about 5 minutes ahead. I made it to Camp Muir in 1:20:24, about 30 seconds ahead of where Uli did. There were a few guys out and about, I said an out-of-breath hello and kept on moving right on through. Knowing I had just put myself 5 minutes ahead of record pace, I was feeling good. “Just keep pace Alex, nothing fancy. Just keep doing what you’re doing.”

I had microspikes in my pack and this was about the point where I was planning on putting them on but the snow was feeling good, the boot pack was excellent, and I was feeling confident in my stride so I continued on in my just my Salomon SLab Sense 8 shoes and left the spikes in my pack figuring I’d put them on later. The moment I felt I needed them never came. I ended up summiting and descending in my Salomons.

Jogging across Cathedral Gap, I didn’t have another split of Uli’s record run until the crater rim where he made it to in 3:00:37 so at this point I quit looking at the time and just focused on me and the mountain.

I’d gotten a good preview of the route a few weeks beforehand when a few friends and I hiked the route (shoutout to Jackson, Lucas, and Robyn). Having never climbed the Disappointment Cleaver route before that, this was a huge help for the sections to come. Cruising through an empty Ingraham Flats camp, I hopped across still snow-bridged crevasse above camp and jogged the flat section toward the start of the cleaver. The snow was still feeling sticky and I was still feeling solid in just my running shoes so in an effort to maintain the unsupported style I left the fixed lines where they lay and continued up. Partway up DC I encountered the first climbing group but was happy to have already passed the bottleneck sections before doing so. This was the first section where I started to feel the altitude and started focusing heavily on my breathing to compensate. I reached the top of the cleaver where just a few weeks earlier we had turned around due to horrendous avalanche conditions (and where I became a brother-in-law). I quickly swapped out an empty bottle for another half-liter FLUID-filled bottle I had in my pack, the last of the 1.5 liters of water I brought, and kept moving.

The bootpack from the top of the cleaver to the crater was in excellent condition and the snow was grippy as ever. Carefully tiptoeing by a few more climbing parties, I made it to the lower crater rim a few minutes under 3 hours and at that point I knew I had it.

I ran across the crater and up to the rim on the opposing side. Running across the rim to get to the true summit saw a person up there taking pictures so not quite thinking straight I just ran right to them, thinking they must be on summit. Unfortunately, in doing so I ran right by the true summit. I stopped, (3:02:13) took a quick rest, and had said person snap a few photos of me before turning around and realizing I wasn’t even on the summit… I ran over and tagged the true summit, hitting the lap button on my watch for a second time, in a time of 3:04:46.

The descent went smoothly, but still knowing that the round-trip time wasn’t completely in the bag I couldn’t ease off. I made it back to Paradise in a total time of 4:14:13.