Mount Rainier (14,411 feet) is the highest peak in Washington, and 5th highest in the conterminous USA. There are many great routes on Rainier, and any ascent is a true classic. The most commonly-climbed route is the Disappointment Cleaver from the Paradise parking lot, via Camp Muir and Ingraham Glacier. The route requires glacier travel and around 9,000 feet of altitude gain.

Speed records on Rainier go back decades, usually done by mountain guides on their days off. The guides know the route and conditions intimately, and know when conditions are ripe for a speed attempt. Climbing legends Lou and Jim Whittaker, with John Day, made the first known speed ascent in 1959, making the ascent in 5h20m and round trip in 7h20m. In 1981, Craig Van Hoy lowered that to 5h25m. The first sub-5 hour trip was August 9, 2004, by Chad Kellogg, in 4h59m01s. Kellogg used ski poles and wore track spikes instead of crampons. His report is here. Kellogg's claims have been questioned by some. Dan Howitt has made it something of a crusade to discredit Kellogg, and has raised some compelling points. Howitt continues to claim the "official" record on Rainier, of 5h59m5s, but of course the idea of any record on Rainier being "official" is meaningless. In any event, since Kellogg's times have been superceded (see below), the debate appears to be moot.

The "Sea to Summit" involves biking to Rainier from sea level at Puget Sound (about 75 miles) and then climbing the peak.  Ascent times are recorded, and some have kept other times as well.  Poster "peakhugger" outlined the challenge:

We will road bike to Paradise, WA (approximately 75 miles) and then climb Rainier. This will be a semi-supported trip with climbing equipment stashed at Paradise and water pre-melted at Camp Muir. Conditions on Rainier have been ideal and we completed a climb of the DC route earlier this week to make sure the conditions were appropriate for an attempt from sea level. We hope to complete the entire S2S in less than a day (24 hours).

Only one other account of a human powered sea-to-summit trip has been located for Rainier: www.angelfire.com/or/petermarsh/rainierclimb.htm This trip in 1999 by Peter Marsh was unsupported from what we can tell (although some equipment may have been stashed at Paradise). The total time was unlisted, but was noted as just less than 48 hours.  (Editor Note:  Jason Hardrath established the documented FKT on this route in 2020). 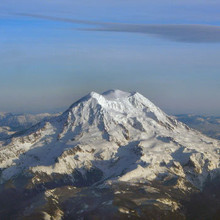 This route on the old FKT site
http://fastestknowntime.proboards.com/thread/54/mt-rainier-wa

I'm not sure how to submit a time, but Katie Bono has the women's speed record on Mt. Rainier: 4:58:41
https://www.rmiguides.com/blog/2012/07/29/rmi_guide_katie_bono_recounts_mt._rainier_speed_ascent
http://www.alpinist.com/doc/web17s/newswire-katie-bono-denali-female-speed-record

Will be attempting the Sea to Summit Duathlon on Rainier this Saturday or Sunday.

We will go in self-supported style.