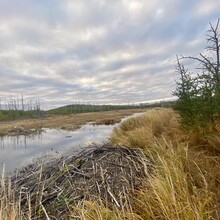 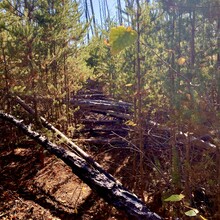 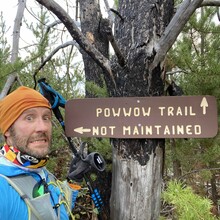 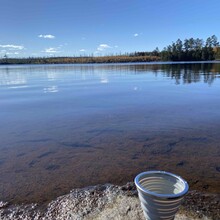 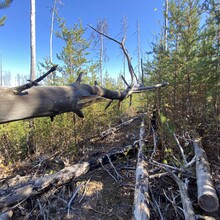 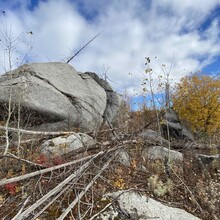 As the route description discusses, this trail starts and finishes on old logging roads from the timber industry's strong hold in the area from the early last century. The Wilderness act reclaimed the area and work was done to restore the forest, but the flattened out roads are evident today. Forest has grown up around it again, but the Pagami Creek fire has of course cleared it all out again and we're watching the jack pines come back post-fire. The first 10 miles going clockwise are relatively easy. Once you hit the log bridge crossing the river around mile 10 and the trail hooks to the north, it becomes an actual wilderness trail again. Get some speedy miles in the first 10 because you're gonna go slow for a while.

The western segment headed up toward Lake Three is characterized mostly by burnt-dead and fallen trees covering the trail, wide open areas of bedrock and a cleared out landscape from the fire. Much of the area is less of an established trail and you have to watch the flags and cairns very closely, it's easy to get lost. Check your GPS along the way frequently as well to make sure you're on track.

Lake three (northwest corner of the trail) has the only old growth area left that didn't get burned (first video). Stands of old white cedars, red and white pines are here and there's an actual mile to a mile and a half of runnable territory again.

The northern section is unrunnable after the Lake Three area and headed east. The entire western and northern section - roughly 14 miles, was inaccessible until a few years ago. Trail crews have valiantly fought their way through it, re-established the route, and cleared most of it as of last year. But then came a super heavy snow year followed by a pandemic and crews that couldn’t get out until late summer/fall. Fallen trees and new growth obscure much of these 14 miles (2nd video). The video above shows what several miles of the trail look like as of Oct,2020. If you're not hopping over or ducking under trees, you're instead climbing up the side of granite rock faces or over boulders along the lake edges. The type 2 fun looking back reflects on a beautiful and challenging trail, but in the middle of it, it's pretty gnarly and tough sledding.

The majority of the trail now is a Jack pine forest on the rebound (3rd video). Jack pines have very seritonous pine cones, meaning they’re covered with a thick resin that has to be burned or melted in order for the cone to open up and release the seeds. The fire through this area acted as that catalyst to release the new seeds and cleared the forest floor for germination. The former forest canopy is completely burnt away but the new forest is coming up to replace it and 9 years later many of the quick growing jack pines are now taller than me. The challenge going forward for the maintenance of this trail are the still-standing burnt and dead trees that will fall down with each winter’s snow and the spring and summer storms.

Around mile 25 (clockwise) as the trail comes close to bending back south the trail is opened up and clear again. This area had a fire previously in 1995 and the trees that had grown up again weren't mature enough to have pinecones so the landscape is pretty baron. There's also a very old huge quarter mile long beaver dam that's completely grown over with a very well established trail to follow. After the dam you're back on the old logging road area and it's a smooth path to the end with a tight trail through the new jack pines again.

Water: Very easily sourced along the 10 or so lakes the trail runs directly adjacent to. I started out with a 2L bladder in my running back I didn't refill because I also carried a foldable silicone cup along with I dipped in to drink from the lakes.