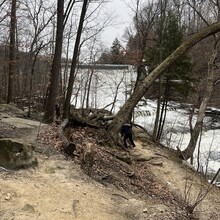 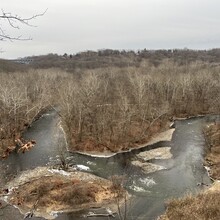 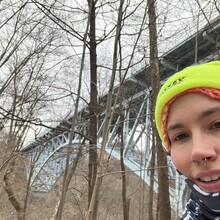 Where to begin? It was quite the adventure, never having been to these parks before. Off the bat, the GPX on the site wasn't downloading at all for me, so i wasn't really sure which direction to go. in hindsight, the directions on the page start at gorge park and go up and left (counter clockwise).

I wasn't sure where the glen's trail head parking is, i saw the glen's trail sign in the gorge parking area. I also noticed some cars parked in the restaurant parking area by the end of the trail 'tail' at front street (far right of the map), but that didn't seem like official trail parking. I just treated the Glen's trail portion as an out and back, im not sure if this was the original intention of this trail.

Well it was a bone chiller/lung burner out there this afternoon, started with sun, turned cloudy, then at finished flakes were in the air.

I started by parking at gorge metro park (bathroom available). HUGE parking lot, about 60% of parking taken, very surprised to see so many people out on such a chilly day. Lots of dogs (on leashes)  :)

I began with Glen's Trail, it was the shortest part, but the best as far as technical trail. Lots of roots, rocks, etc. It was icy in places and footing was questionable with blobs of leaves still covering some spots of the trail. Passed 7 people and one dog on a leash. It is a lovely out and back with a view of the river and whatever abandoned industry is across the river.

After that i crossed the bridge and headed down high bridge trail, this is a double track dirt road, some was paved. It travels along the river and goes passed the dam. Nothing much to comment on here, this was the most boring part. I passed 2 people on this portion. there was also a parking area on this side of the bridge with a handful of cars at the trail head.

After passing under the big (blue?) bridge (the high bridge??) - one picture. there were many wooden steps. this trail was a nice flat tightly packed dirt 1.5 track. There is also a trail at river's edge that i saw from my trail. Eventually this nice trail lead to 2 sets of stone steps, this led down to... a trail that was marked with a flower symbol, (chuckery? perhaps this is where the wood chucks do their thing? i did see a 2.5inch diameter tree that appeared to be chucked.. by a chucker.. or perhaps a beaver) the trail ran along the river and was mostly dirt with some random rocks and roots. It was a nice trail, mostly double track, then went by 'the signal tree' and had 1.5 track width. Bathroom near the signal tree parking area. There were many places to enjoy the river, in warmer months, wading or dog swimming, etc.) I followed this until it came to Peck road - turned right on the road.

I turned right from peck to cuyahoga street, i ran along the side of the road, thank goodness it was winter and the weeds/grass were trimmed, or that would have been some barkely marathon stuff. Eventually i darted back in toward the softball fields and got onto the oxbow trail, this had some twists and turns through a cute little grove of trees, which had nice labels identifying trees.along the trail. i ran into 4 people here. This lead up to the look out. very nice views - two pictures.

I turned right on Peck road then turned right on ... the main road.. I eventually took the second right, down to Babbs (?) park area... it was a paved road back down to the river, no cars or people down here. The trail by the river was about 1/4 mile of crushed blacktop, then it ended and i was following a barely there single track along the side of the hill/river. The closer i came to the big high blue bridge, the less and less of a trail that i was able to find/follow. I used my All trails app to find my way back to the trail that is an actual trail - the one that ran along side the dam - see the dam photo.

There were wooden steps up to a double track with some rocks .. and back to the parking area!

This last section was the most populated, 17 people in this stretch.

Overall, i can see why this area is popular, there's a lot to see. i wouldn't come down to these trails for 'trail running' specifically but if i was local and didn't want to drive far, i could see this trail as something that would get the job done for some training. especially running glen's trail multiple times, back and forth.. lots of technical stuff, just not very much elevation.  It was fun circumventing the gorge, mark it off my to-do list. i may come back once everything is green again, just to see the difference, and maybe take a swim.

** note - the map of my run does not show the start (0:00 - 27:08 - at the glen's trail marker in gorge parking lot - crossing front street, running down the trail until it ends at front street, and running back, etc....) but my tracking does pick up (in the middle of the frozen river???) while i am on the high bridge trail, which i started after i crossed the front street bridge, and turned right into the parking lot and onto the trail. This is the first time my watch has ever had this happen. The elevation/pace/HR/cadence does capture all the info from this beginning part of the run, just not on the map.

Editor's note: It appears Alyssa's watch didn't have a GPS fix for the first ~2 miles of the activity, but the existing data does match her description above. Note to all: always make certain your device has a full GPS fix before beginning an FKT attempt, and consider using two devices to track each attempt--this kind of thing happens more often that you might think.