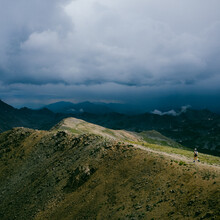 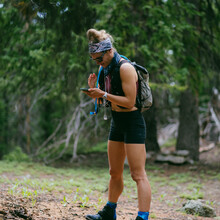 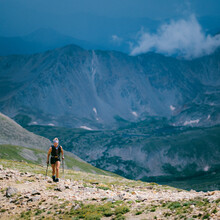 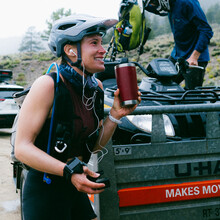 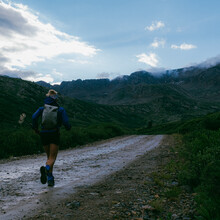 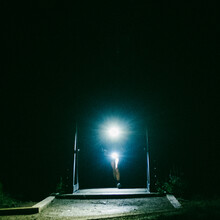 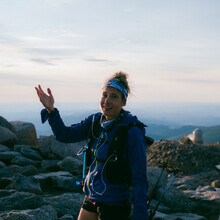 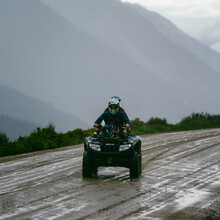 On August 1, 2022, Andrea Sansone set a new overall FKT for the most 14ers climbed in a single 24-hour period.  It was a supported attempt, and she followed the 3000-foot rule to determine start and end points for each group of peaks that was climbed.  She carried all her own gear, food, and water and climbed the last 7 peaks by herself.

One of the team’s strategies was to use an ATV to speed up driving times between the peaks.  She did this in the heart of monsoon season and overcame a hailstorm on Columbia, getting drenched in a late afternoon rainstorm on the ATV ride down from Clohesy Lake, and a road closure on 285 that added an unexpected detour and slight delay to the drivetime.

Her original spreadsheet only gave her 5 minutes to spare to complete the 12th peak in 24 hours. Going into the attempt one of her biggest fears was starting the last set of peaks not knowing if she had enough time to complete them.  Knowing that every minute was precious she scouted each grouping of peaks multiple times leading up to the attempt to assure she would not make any route-finding mistakes.

She started with a 5-peak grouping of Columbia, Harvard, Oxford, Belford, and Missouri.  For this section she was accompanied by Andrew Hamilton.  She was in high spirits as peak after peak she was beating her expected times.  Even in the rain where she was freezing on the ride down on the back of the ATV, she was very happy after finishing the section over an hour faster than expected.

The next set of peaks was Decalibron (Democrat, Lincoln, and Bross).  Unfortunately, the team received word about how a detour on highway 285 had led to an hour-long backup for traffic heading home to Denver on Sunday evening.   This was very frustrating as it seemed like she would lose all the time gained from going so fast on the first leg.  However, the traffic gods smiled upon Andrea, and by the time they drove that section of road the traffic had cleared.  They continued driving towards Decalibron as evening approached and a big rainstorm completely obscured the view of the peaks ahead.

Getting started on Decalibron was difficult as Andrea’s altimeter was giving what seemed like a bad reading.  The team spent a few minutes comparing altimeters before assuring themselves they were at or below the necessary starting location.  After the frustrating delay she hiked quickly up the road in the shadow of a beautiful rainbow as the rainstorm subsided and gave way to some beautiful rays of late evening sunshine.  She finished the group in about 3:30 and was still beating her expected times.

Now in the dark and well ahead of schedule the team drove to the south side of Grays peak, to the Argentine Pass Trailhead.  From here she climbed Grays and then Torreys and then ran down to the Stevens Gulch Trailhead where the team picked her up.

Now she had completed 10 peaks and had earned a buffer time of about 2 hours.  That meant she could hike the last two peaks 2 hours slower than expected and still have enough time to finish.  Instead of feeling confident though, Andrea was feeling anxious.  She had expected to be climbing the Sawtooth ridge in the light, and despite having scouted it in the dark she was worried about making a mistake and unsure of being able to finish on time.  With an anxious, tired outlook she began the climb up Bierstadt.  The hike seemed endless, and she hiked much slower than she had all day, taking 30 minutes longer to climb Bierstadt and 12 minutes longer to get to Evans than expected.

However, as the sun came up it warmed her spirits and she regained her speed and completed the descent, arriving at the finish location at 8:01, finishing 12 peaks in 22 hours and 16 minutes. She was met by a small group of friends who cheered her on as she completed the adventure.

Thanks to support crew Andrew Hamilton and David Koepke!
Also thanks to Riley, Randy, Lisa, and Sydney for showing up and cheering her on!