Depending how you count a separate peak, Colorado has 53-58 peaks over 14,000 feet, the so-caller "14ers". It seems a natural challenge to attempt to climb all these lofty summits over some period of time -- most people would accept a lifetime as a reasonable goal. Of course, for some it is irresistable to see just how quickly they can bag the lot.

How many 14ers are there? For purposes of the record, at least through Cave Dog's record in 2000, people used 54-55 peaks. They are the 53 peaks having a minimum of 300' prominence (as listed on Wikipedia, note that Challenger Point was only named in the 1987), plus the traditionally accepted summits North Maroon and El Diente. More recently, it has become popular to say that there are 58 14ers. None of the 3 added peaks (points, really: North Eolus, Cameron and Conundrum) meet the 300' prominence rule. Nevertheless, in recent years it seems like the community has come to accept the list of 58, which are all points over 14,000' which have official names according to the USGS, as shown to the right. Hopefully the USGS will not go on a naming spree!

Several guide books and a website are dedicated to the 14ers. The 14ers have become so popular that erosion and trail damage became a problem. The Colorado Fourteeners Initiative was formed in 1994 to maintain these routes and protect the fragile alpine environment of these peaks.

The 14ers are scattered all over the state, and it is standard to use vehicles to shuttle between the trail heads. You can actually drive to the summit of some of the 14ers (particularly Pikes Peak and Mount Evans). So, over the years some rules of engagement have been established for viable 14ers records. Most critical is the so-called "Colorado Rule", which says that the climber must ascend at least 3,000 vertical feet net elevation on foot from the base of the first peak in a series, and descend at least 3,000 feet at the end of the series. The climber may descend less than 3,000 feet when traversing between peaks that are linked on foot. Cave Dog's website gives a detailed discussion of the rules and some intricacies.  In particular, Cave Dog established the so-called "no guiding" rule. Under this rule, the record aspirant may have company, but must be out front at all times and must do all the route finding.

There have been many amazing speed records on the 14ers going back nearly 50 years. As the record has evolved, so has the list of recognized 14ers. Lately, record aspirants have gone after 58 peaks, which are all points over 14,000' that have officially-recognized names (by the USGS), as discussed here. Cave Dog's website gives an excellent discussion (by Rick Trujillo) of the history of speed records on the 14ers. To give a sense of the challenge, for their 1997 record (14d0h16m), Rick Trujillo and Ricky Denesik calculated that they traversed a total of 314 miles and gained 153,215 vertical feet! Here's a summary of historical speed records from Cave Dog's site:

Another history of 14ers speed records, including some earlier records, was posted to 14ers.com in 2014. A few of the details are different from those given above.

Winter: Only a few people have climbed all the Colorado 14er in wintertime, and until 2018 no one had completed all 58 during a single calendar winter. Will Seeber climbed 51 summits during the winter of 2016-2017, which was at that time the most climbed in a single winter. As usual, Seeber's project was followed on 14ers.com, and this long thread includes an in-depth discussion of what might constitute winter "rules" for a Colorado 14ers speed record - there are many nuances that may differ from the better-established summer "rules" followed by Andrew Hamilton and others. In summary it appears that the community has not yet come to consensus on winter "rules". It is of note that Seeber was more or less "self-supported" in that he had no designated support crew, though he often climbed with others. He sometimes used skis or snowshoes, and rode a bicycle to the top of Pikes Peak. His peak list for the season is given here.  [NOTE:  For some reason people have added "North Massive" to the winter list, making it 59 peaks.] 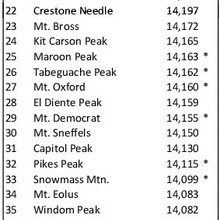 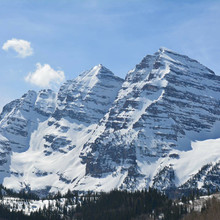