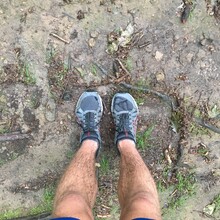 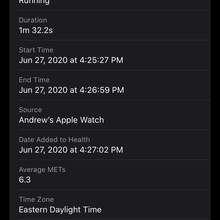 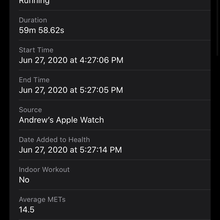 Trip report is below, but first I'd like to address the strange GPS data. Before starting the route, I recorded a 90 second warmup to make sure my watch was connecting with GPS. As shown in the screen shot, I ended this workout recording at 4:26:59pm. 7 seconds later, I start the FKT recording at 4:27:06pm. But for some reason, my watch didn't record any gpx track points until 11 minutes in. However, I guess it still had a cached track point from the warmup run that was recorded at 4:25:49pm, so it saved this as the very first track point of the FKT recording even though it occurred before I started recording. Hence why Strava reports my total moving time as 1:01:16, even though the real time is 59:58.

Well this was certainly not what I thought I'd be doing today. I was thinking of heading over to wet blue to enjoy the thunderstorm, but I couldn't do Elderslie a third day in a row. So I figured I'd try driving somewhere and that's when I noticed the newly added FKT at Sleeping Giant. Rain started off nice and heavy at the beginning and seemed to get lighter as I headed west. By the time I reached the turn around point, there was even a few minutes of sunshine. Then as I headed back east, the rain slowly picked up again until it was once again a steady downfall as I approached the eastern trailhead. Most view points were an opaque white curtain of fog, but once or twice there was a break in the clouds for a nice view of Quinnipiac. Since there was no unsupported male time for the FKT, I wasn't hammering this particularly hard, so hopefully there's opportunity for other people to take a crack at lowering the time. Turn around point was somewhere around 29:30, out n' back time was 59:58. I started and stopped at the Chestnut Lane trail sign. My turn around point wasn't as well defined; I sort of stood around on the road scanning for any white markers to make sure I was at the end of the trail, and then I noticed the large "White trail" sign behind me and figured this was it. It was definitely a fun trail and probably even more enjoyable in dry conditions, but I certainly appreciated having the park virtually all to myself on a day like today.