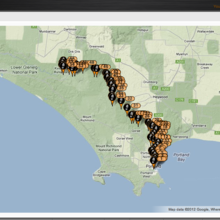 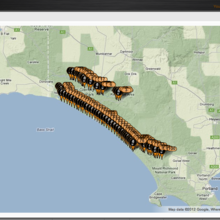 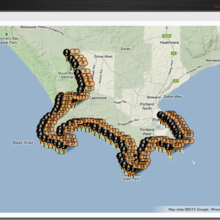 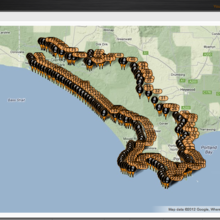 Over the Easter weekend, April 2012 I drove to Portland and ran the Great South West Walk loop ensuring I visited every campsite completing a sort-of hour glass course over 58:33 hours and experiencing the full amazingness of this trail. There were many highlights, not the least running along the clifftops of the Glenelg gorge coming into Nelson with the sun rising, leaving the beach and crossing the sand-dunes to Swan Lake in misty fog that created a featureless landscape that made me feel like I was in a snow white-out, and the fairyland path that wound its way through lush green vines in the Enchanted Forest, and the stark contrast of the giant wind turbines on the headlands. I had 2 or 3 short dirt-naps and took water at the shelters. I also timed it right to reach the Nelson kiosk in time to buy a half dozen potato cakes and an ice-cream to go. Everything else I carried with me (no drops or crew). Loved every minute of it, except maybe the last couple of hours when my knee ached and the rain started in earnest. While this FKT was completed many years ago, I am only registering it now as there is interest by someone else wanting to attempt the FKT so I thought it appropriate to have the standing FKT recorded. I do not have a GPS track of the run as it was run before access to gps watches that could be charged on the go. The Spot tracker has a gap on the western edge where the batteries went flat unnoticed until I stopped at the kiosk in Nelson. While there are 2 options along the southern coastal sections, I chose the longer inland route via Swan Lake to ensure I visited every campground/shelter along the track. This also avoided the high tide along that exposed beach section.