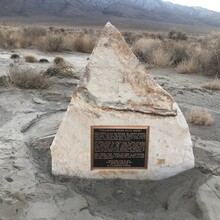 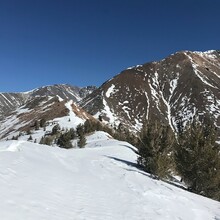 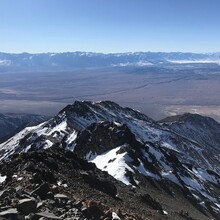 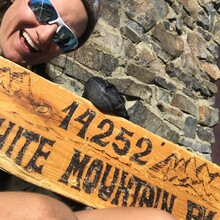 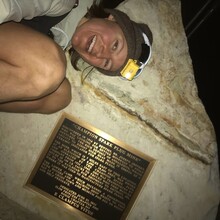 Time from where the other groups started: 12hr 8min

I've been eyeing the West Ridge of White Mountain for some time. It hadn't snowed since December out here, and the ridge looked mostly clear of snow, so I decided to give it an attempt. I really wasn't sure what to expect since I had never been in the Whites in February, but I was mostly just scouting.

I decided to start at the Champion Spark Plug Mine plaque (aka, the junction of Highway 6 and White Mountain Ranch Road) because a. the car I was using doesn't handle dirt roads well and b. I feel it makes the route a bit more aesthetic.

I departed at 6:55am at 4,500ft and ran the 2.6 miles up the dirt road to where the other two parties had started (5,400ft). I got to their starting point at 7:30am. From there the route follows a steeper dirt road another 1000ft to where it dead ends. Then you just start sending it up the ridge! The going was surprisingly cruiser until around 9,000ft where the route gets steeper and the lovely White Mountain talus begins.

Around 9,500ft is where I hit the first snow. This snow had a firm, icy top layer with soft powder underneath so you punch right through, cut your shins on the ice, and smash you ankles/feet into any rocks or branches hiding below. Luckily there were enough dry patches/rocks and fallen trees sticking out I was able to avoid most of it with carefully chosen paths, but the going was definitely slower than I would have liked. Around 10,500 feet the snow became rather tedious when combined with the dense trees and bushes. Worried the snow would only get worse, I was debating turning around here, but seeing some other lad's rather fresh foot prints inspired me to carry on! I then traversed to the south-facing slope and found more easy going.

Thankfully, at 11,000ft the ridge narrows and opens up to some beautiful views up the route. I have to say the snow definitely enhances the scenery! And it looked a lot more manageable up ahead! The rest of the route was pretty dang awesome. Fun ridge traverses, some steep climbs, lots of talus, short little scrambles, crazy views of the Sierra Crest + Table Lands + Owen's Valley + Chalfant Valley. I was feeling great until the altitude hit around 12,000ft, but I was still having a blast. It felt like I was alone on another planet!

Before long I hit the summit at 2:36pm, snapped a pic, signed the register, and was on my way down! I was stoked to see that the footprints I had been following summited 2 days before me (2/6) as the first summit of the year! Making me the second :D

Given that everything I had heard about the descent said it was pretty terrible, I was prepared for the worst. But it wasn't too bad. There's a few short climbs on the way down, and I would definitely recommend gloves for when you fall on the talus, and it's not as quick as you'd expect (unless you're Sean), but not too bad. I was bummed the snow was too postholey for sliding on though.

It got dark right when I hit the snowy section around 10,500ft. Here my poor navigation had me swimming in some deeeep snow that had blown into this gully I wondered into. Other than that I made it down smoothly and had a lovely run back once I hit the dirt road! Made it back by 8:02pm!