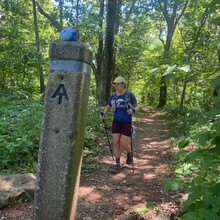 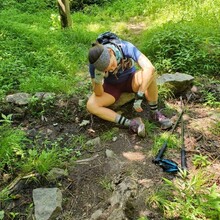 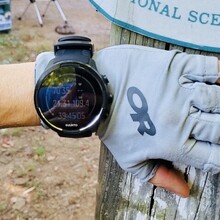 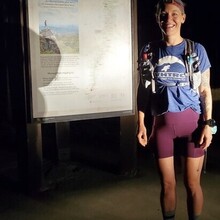 I set out at 3am on June 17 to attempt an unsupported FKT on the northbound route of the Appalachian trail through Shenandoah park: about 107 miles of beautiful Virginia blue ridge. This challenge meant carrying all my gear and relying mostly on springs for water. No assistance from anyone. No sitting in a camp chair to change my socks. No handing over my headlamp (or my back up) during the day. No one filling my bottles while I refueled on whatever food I choose from a variety of delicious options. No pouring ice in my hat. This meant that I would even pack out all my trash. What I did have was an abundance of moral support from my friends Sheila and Brett who would meet me along the way to assure my safety and supply me with massive doses of encouragement. Brian, my husband was attempting the same route as well, starting 15 minutes behind me.At the end of the day, it turns out, this was all I really needed.

I put a lot of thought into meticulously planning this adventure, trying to get my pack as light as possible but still have ever thing I would need. No fancy blister kit- just some duck tape. I mapped water sources, calculated calories, and accepted there would be no luxurious change into a clean shirt or cooling down from an ice cold drink.

My pack weighted 15.5 pounds at the start, including 3.5 liters of water. It was humid even at 3am when I left Rockfish gap at the southern end of SNP. I was excited and without expectations. It didn’t take long for my legs to notice the weight of my pack but I knew it would get lighter. The crescent moon was hazy and glowing a deep gold in the hours before the sunrise. I turned my headlamp off for a moment in an open area to admire the stars. After the sunrise, I enjoyed what felt like having the entire park to myself, seeing only one person and several bunnies. Black Rock, a bit over 20 miles in, was my first water source and it was right in time as I took my last sips! I ran a half mile round trip down to the spring where I was surrounded by backpackers intrigued by my mission. I was a celebrity for a few minutes by that stream! One guy asked if my run would have a large presence on social media. I told him not really and that no one really cares too much about stuff like this except other runners who are equally insane.

The late morning brought more heat and humidity. Most of my focus through the day was on keeping a sustainable pace, eating, and hydrating. Failure to do this would be game over for sure. I continued to enjoy the time alone followed by brief moments of uplift when seeing Brett and Sheila every 10 miles or so. I didn’t think much about anything outside of the present task. Just keep moving forward. Every step has purpose. Don’t think too much about what is to come because you aren’t quite there yet. I love that about ultrarunning.

Toward the end of the day I was suitably tired but still in good spirits, making jokes, and moving well. All of the springs were flowing well with ice cold water, a relief that was a life saver each time. By the time I reached Hightop around 40 miles I had already added an extra 2 miles from running to water sources. Before descending from Hightop I turned my phone off of airplane mode and learned that Brian had been struggling with the heat and getting sick and had decided to stop. I felt disappointed for him but grateful that the heat hadn’t affected me that bad. Or so I thought.

I was nearly halfway through at dusk and unaware of how this run was about to test everything I had. I stopped to fill up once again, put on my headlamp, and eat a payday bar - a treat I had been saving for that very moment (and the perfect summer ultrarunning candy bar because it doesn’t melt into a mess). An hour or so after sunset I became overwhelmingly tired and my appetite vanished. It wasn’t a slow progression into feeling that bad. It happened quickly. I couldn’t eat or drink and suspected that, despite my vigorous efforts to take in fluids and salt non-stop all day, I was still dehydrated. I arrived at Milam Gap and did something I have never outside of running a 200-miler: I tried to taka a quick nap. Two minutes passed and I realized I wouldn’t fall asleep so I got up and kept moving. The next 9 miles to Hawksbill was mostly smooth and runnable trail but I couldn’t take advantage of it. Instead, it was a physically and emotionally agonizing slog spent mostly in the darkness of my thoughts. I wasn’t getting any calories or fluid in my body and felt so weak. Running or exerting myself made the nausea feel worse. I kept sitting on rocks to rest. I felt defeated and angry with myself for not “doing better.” I decided that I would bail at Hawksbill or Skyland. I’ve actually never, not even once decided to drop out of a run. Even when I had a stress fracture halfway through Bigfoot 200, I never questioned whether I would finish. This was the beginning of an intense debate that would last for the next 7 hours.

As soon as I decided to quit, another part of me would step in and say “What?? No way. You have worked so hard. People have given their time to cheer you on. Choosing to keep moving through the pain is what this is all about.” As soon as I decided to keep trying, that other part of me would speak up again and say “You’re not going to bounce back from this and there’s no way you’ll finish in the heat tomorrow. It’s okay to stop.” When I arrived at Hawksbill, I informed my optimistic spectators that I was having a really hard time. I sat on a rock and I put my head in my hands and said “I don’t think I can do this.” The thought of 45 more miles was sickening and inconceivable. I wanted someone to tell me it was okay to stop. I’ve never wanted to give up so badly.

I grudgingly decided to go 6 more miles to Nicolson Hollow to at least get in 75 miles before throwing the towel in. I said “I’m going to try” but I knew I was done. I tried to sip water, eat a few heads off my animal crackers here and there, and move slow to allow my body to absorb some nutrition and fluid but it didn’t really matter that much anymore. I sat on the curb in front of Skyland where it was eerily silent. I closed my eyes and envisioned myself passing out in a camp chair within an hour or so and my friends and husband would be saying things like “It’s okay. You tried your best. It was just really hard out there today. Next time.”

It was minutes before dawn when I arrived at Nicolson Hollow, still feeling like a complete mess. I sat down, beyond ready to succumb to this bullshit. Then Brett said that when I make it to Thornton Gap I will have less than 30 miles to go. He didn’t say IF I make it, he said WHEN. I think in that very moment I finally made the choice I had been debating since 11pm the night before. I said “okay”, immediately got up, and continued down the trail. I knew that once I reached 80 miles at Thornton Gap it would feel like nonsense to quit at that point. So, I had to make it there.

As I shuffled back down the trail, I recommitted to the willingness I had at the start to suffer through the discomfort and reminded myself that I am not willing to accept the regret of giving up. I remembered how much I value the investment and belief that myself and others have in me. Once I made the choice to stop questioning myself it felt like an enormous burden was lifted and I was going to be okay. It was going to suck but I thought about how badly I wanted that moment at the end where I would be tearful and overcome with all the incredible feelings that we chase after in our long running adventures. I was able to take in the breathtaking sunrise and I felt so relieved to know that I was going to finish this thing.

Once I descended from Mary’s Rock and came into Thornton Gap I was able to start eating and drinking again after 10 hours of little nourishment. What a huge relief after thinking all night for certain that I would never get my body feeling okay again. I felt the benefits with my energy and was able to fully enjoy an early morning encounter with a momma bear and her two cubs.

As the day progressed, so did the heat just as I had expected. I was moving slow, but moving nonetheless. It’s not usually my style to take frequent breaks, but I found myself having to stop and sit on a log or a rock every couple of miles for a few seconds to gather myself before continuing. I also had to lean over my trekking poles to whimper every now and then. Whatever it takes, right? By the early afternoon I was picking up my pace and in the zone to just make it happen despite how bad it hurt. I was delighted to run into some fellow VHTRC runners heading toward Elkwallow and reveled in the familiarity of strangely endearing and slightly inappropriate comments from Bob Gaylord.

I pushed so hard the last 15 miles: running fast and then stopping to lean over, anticipating either tears or vomit. The adrenaline and eagerness for the moment where I could sit down in an actual chair and not have to get back up took over. As I came “barreling” down the trail toward Compton, a couple asked if I had seen any bears? And then asked if I had seen the comet? And then, if not, would I try again tonight when it was clearer out? And then asked….”I’m sorry, but I have to keep going.”

When I came into Compton Gap, I didn’t stop to chat or sit, but I kept going. Sheila yelled “you’re such a badass!” and I remember replying “If I can kick ass as much as my ass is chaffed, I’m gonna be good!” The last five miles were filled with out loud “what the fucks?” as the trail inevitably felt significantly longer than it did the last time I ran it without 105 miles on my feet. Who would have thought? I felt like I could have collapsed running the last mile toward route 522. When I heard the voices of my friends and husband as they spotted me, I thought about the hours upon hours I spent hanging on by a thread and thinking that this moment wasn’t going to happen for me. I was so close to giving it up, but I didn’t. My finish time wasn’t fast enough to qualify for an unsupported FKT (109.4 miles in 39:45 hours), but I still think I got exactly what I went out there for. I went to the edge of my limits, lingered there for a while in complete fear, and then pushed it just a little bit further. The reward? A permanent expansion of my perceived limitations. And some severe chafing on my back.