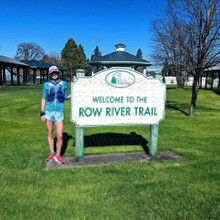 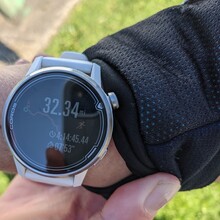 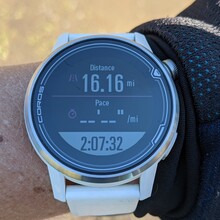 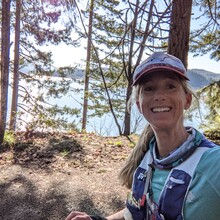 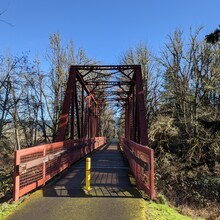 With lack of races to jump into, I was looking for some shorter, closer to home routes that were passable in the winter- thus the Row River Trail route. I'll admit, I did not go into it super prepared gear or planning wise. I borrowed my dad's car so my husband and kids could meet me later at the finish, and did not double check the trailhead he plugged into the gps. After driving the wrong way up Row River Road for a while, I finally sorted out where I needed to go to find the start in downtown Cottage Grove. I had filled my pack with some small water flasks, a filter for if I got desperate, some sour gummy worms and called myself ready to go. My headphones died within the first mile, and after wasting a few minutes trying to fix them, I finally gave up and decided this solo run was going to be even more solo with no music or podcasts. It was probably for the best because with the unusually warm and sunny weather, quite a few people were out on the trail. My favorite miles were the ones away from civilization- away from the start and end trailheads, when the trail went along the lake and more in the woods. I have never encountered so many pitbulls on a run before- both on the trail and fenced in people's yards. I hit the turnaround at Culp Creek TH in 2:07. My legs started to feel the miles and pavement around mile 20, and I would try to run on the gravel shoulder as much as I could in the sections that had it. The final three miles or so we're a bit rough as I was out of water and food, but happy to finish in 4:14:45- I used getting in under 4:15 as a carrot to push it to the end. Happy with almost perfectly even splits, though I know the return trip was a net down. A fun alternative to a race right now, thanks to Jason for adding this route to the FKT board, as I would have never known about it.