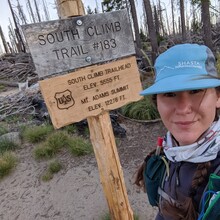 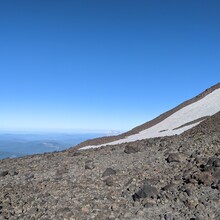 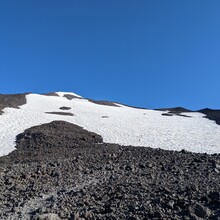 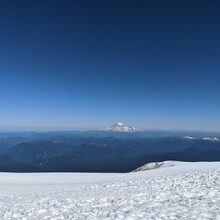 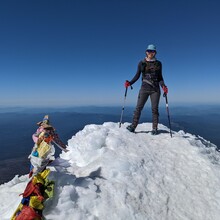 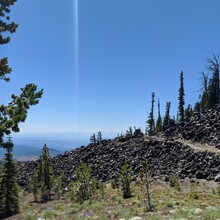 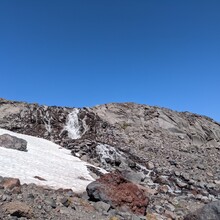 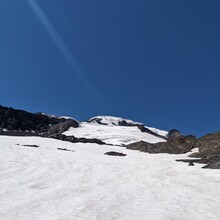 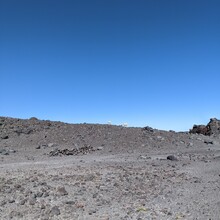 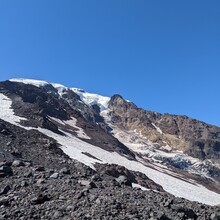 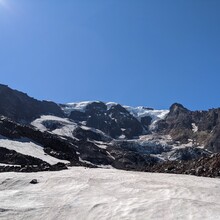 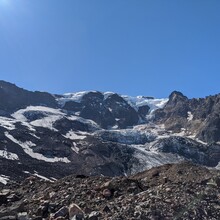 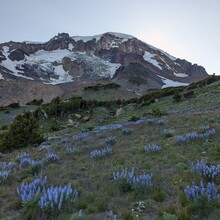 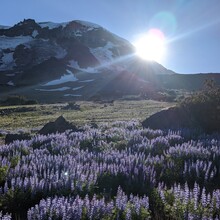 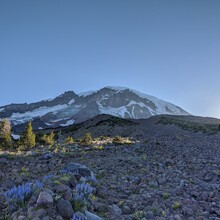 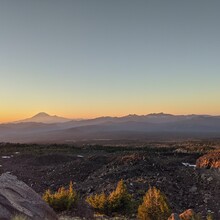 ***FULL TRANSPARENCY*** I went into this effort with the intention of it being completely unsupported. I had an interaction with a fellow FKT’er (Jason Hardrath) that I believe made this effort supported. I didn’t think much of it at the time, but we happened across one another towards the end of the off-trail section on the East side of the mountain. Jason was doing the infinity loop the same day that I was doing the summit/circ. He caught up to me as I was scoping out and making a decision on how to tackle a traverse and downclimb on steep terrain around a rock outcropping (labeled The Spearhead on Google Maps). I had made the decision to go with the original beta to get around and down the other side of this outcropping. After a few minutes of chatting with him, I asked if it was okay that I follow him through this section, not because I didn’t think I could do it, but simply because it was nice to see him and I wanted to hear more about how his effort was going. He was fine with it, and we went on our way. We ended up sticking together for several miles. I know that I would have made it through that section without having followed him, and I’m kinda kicking myself in the butt for making that decision. I don’t know if this interaction constitutes this being a “supported” effort, but for the sake of transparency and keeping with the honor code of FKT’s, I decided to go ahead and submit this as a supported effort.

I started my watch at 5:44am; just as the light was touching the sky so I wouldn’t need a headlamp. I decided to take it easy on the climb to the summit because A) I had never been on Pahto (Mt Adams) before, and B) I knew I had a big day ahead. I power hiked to the trail intersection where the poorly named Round-The-Mountain Trail intersects the South Climb trail. I brought two Ultimate Direction packs with me: one for the climb and one for running round-the-mountain. I hid my running pack behind a tree near the intersection and proceeded to follow the South Climb trail. The trail was easy to follow. Eventually, I got on snow and strapped my crampons to my Altra running shoes. Snow conditions were excellent. Partway up I realized that I had stuffed all of my food and water in my running pack, and didn’t have anything with me besides a small bottle of super concentrated Tailwind. I sipped it slowly. I got to the summit and asked someone for a quick photo, made sure to admire the views of Tahoma (Rainier), Wy’east (Hood), and Loowit (St Helens) before heading back down the mountain. I glissaded every chance I got, and I have to say, glissading is EPIC on Pahto. I was able to find fresh, running water on the way down and drank my fill. I took a few moments to refuel and rehydrate at the trail intersection before stashing my summit pack and donning my running pack. I started to jog down the Round-The-Mountain Trail. I chose to go counterclockwise so that I could tackle the off-trail section, frequently called “The Gap,” in the daylight.

Luckily I had a reliable gpx track to follow. I felt a little nervous as I left the well-trodden trail and started cutting North into the wilderness. I paused multiple times and couldn’t help but wonder what I was doing wandering off into this unforgivable terrain alone. Ultimately though, I kept pushing forward, and after hours of picking my way up and over huge moraines, through steep volcanic talus, and across snow fields, I came to the crux: crossing the toe of the Klickitat glacier and climbing over Battlement Ridge. The toe of the Klickitat is covered in unstable rocks. There are crevasses and ice bridges and mud holes. Footing is unstable and rocks and large boulders will suddenly collapse out from under you. I didn’t even realize that I was walking on ice strewn with rocks until I looked behind me and saw an ice bridge covered in talus that had a gaping hole underneath it. I moved a little more cautiously after that.

Once over the rock-strewn glacier, I started scrambling up Battlement Ridge - a steep ridgeline comprised mostly of sand and scree and a few larger boulders. Going up this ridge is like being on a treadmill set at 50 degrees: if you stop moving forward, you’re going to keep going backward. After battling my way up Battlement Ridge (heh), I came to The Spearhead. I scoped it out from a couple different angles, considered dropping down into the valley below using the snowfield in front of me, but quickly made the decision to continue along the path of the gpx track, since I knew that was doable. Then I heard Jason’s “WHOOP WHOOP!” from behind me. I saw him cresting over Battlement Ridge and start coming my way.

I was happy to see him and made the decision to follow him along the series of goat trails that traverse across and through The Spearhead, then down a steep ridgeline and into another gully. We stuck together for several miles before parting ways, both of us having to slog through the rest of our efforts. I had about 20 miles left, he had to go up and over the mountain again. He decided to lay down for a little dirt nap and I pressed on.

The night brought on lots of mosquitoes and animal sounds from the surrounding forest. I put music on to drown out the buzzing of the skeeters and to warn animals that I was trudging towards them. Luckily, the trails on the West side of the mountain are smooth(ish) and easy to follow. I jogged the runnable and walked the rest. There were so many water crossings.

When I came to the intersection with the South Climb trail, I grabbed my summit pack from behind the tree, threw it on over the top of my running pack, and walk/jogged the 1.2 miles down to the trailhead. I finished in 22 hours and 16 minutes; one hour faster than when Matt and Seth did it, but about 4 hours slower than I thought I would be.

I stumbled back to the car, made myself some ramen and a protein drink and eventually crawled into bed as the first light was touching the sky.

The Athlete requested this FKT be Flagged because it later was discovered she was on Tribal land that was closed at the time.  The error was entirely inadvertent, but she wanted to maintain integrity.  Subsequent efforts that are slower will become the new FKT (provided they obtained permission from the Tribe or the land was open), while this fine effort will remain on the site for reference.  We thank all participants for their honesty and integrity in the world of FKTs!

Awesome work out there Ashly. Sorry, about bumping your unsupported to supported ☹ however, it is cool that you beat the original two man team men's time for this (they had eachothers company too) so good on you for getting out and crushing one for the ladies!