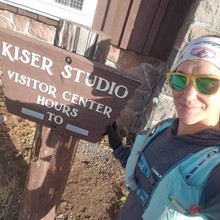 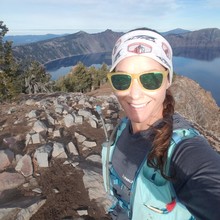 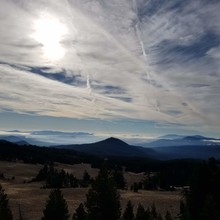 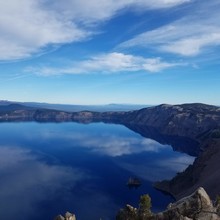 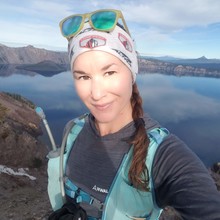 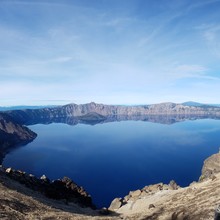 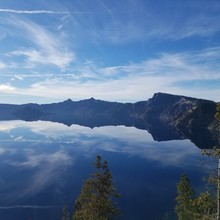 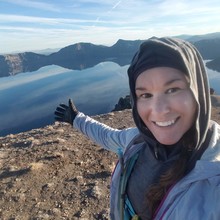 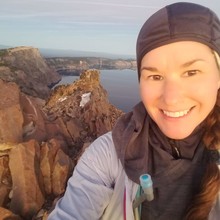 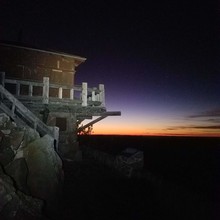 What a phenomenal route! Ever since Jason Hardrath and Winston Mueller set this route, I've been wanting to take it on. I finally made the decision to go for it and I'm so glad I did. Jason and I started at the Kiser Studio in Rim Village at 9:00 am on Saturday, November 16th. It was a beautiful crisp morning with no wind: a perfect day for an adventure. We both chose to go counter-clockwise around the lake, knowing full well that Jason would be out of my sight within the first couple of miles.

Jason quickly pulled in front of me and by the time I reached the summit of Garfield Peak, he was already down the other side. I stopped for some pictures (because how could you not? This lake is stunningly beautiful), then started my first cross-country section over to Applegate. The terrain, while appearing rather moderate, is actually quite tough to navigate because of the soft, sandy texture of the soil. The light, pumice-y sand rolled out from underneath me and filled my shoes as I plunge-stepped down a ravine towards the road on the backside of Applegate.

The respite from the soft sand was short-lived as I hopped off the road again and started making my way towards the Dutton Cliffs. I was feeling pretty sluggish at this point and acknowledged the fact that it would be dark before I was done. I topped out at Dutton and immediately started on my way down the other side, knowing that I was aiming for the road again. I had my first little snafu as I turned too sharply back towards the lake and ended up at the top of some cliffs with the road quite far below me. I had to backtrack a bit to find a way down from the cliffs to the road, wasting time and adding mileage to my day.

I hit the top of Cloudcap around 1:15 pm. I was feeling pretty dumpy, but I knew I had a decently large section of road coming up and was looking forward to that.
The road allowed me to relax and find a rhythm for a little while. The North Rim Drive is currently closed for the winter, so there was no worry about traffic. I'm not sure I would want to run that road during the height of the tourist season.

I was starting to worry about getting up Hillman in the daylight, knowing that it was the techiest peak that I would have to climb that day. I got to the top of Llao at 3:55 pm. It was a pretty cool feeling getting this far around the lake and seeing all the land I had covered as well as the four high points that I had hit earlier in the day. Eyeing Hillman from this angle, I could see that this side of the peak was covered in snow and ice. I made the decision to traverse around to the other side and scramble up that way instead. I hit the final little summit scramble on Hillman just before 5 pm just as the sun dipped below the horizon. Feeling stoked, I quickly descended Hillman and started towards The Watchman as I dug my headlamp out of my pack.

At this point, I was elated because all of the hardest peaks and cross-country travel was behind me. I climbed the icy switchbacks of The Watchmen and got to the top at 5:43 pm. All I had left was a short run on the rim trail back to the car where Jason was waiting for me with an FKT beer by Sufferfest Brewing :)
We sat lakeside for while sipping our beer, reminiscing on the day, and admiring the way the stars reflected in the glass-smooth surface of the lake. It was the perfect end to an epic day.

This route is amazing and so worth it. The climbs are steep and the sand is deep. I certainly could trim some mileage off of this effort by streamlining my cross-country routes.