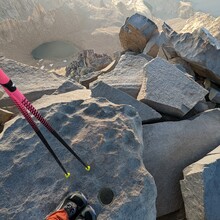 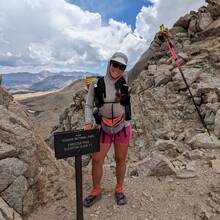 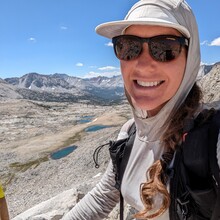 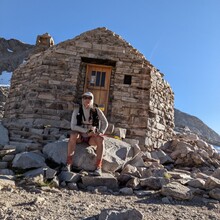 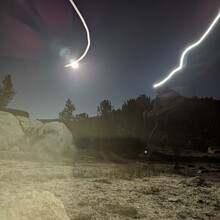 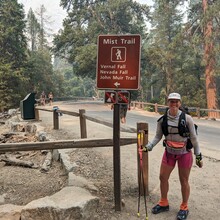 I am posting my time from the Happy Isles trailhead to the summit of Mount Whitney, since that is the official start and official finish of the John Muir Trail. I do have data for the trip from the summit of Whitney to Whitney Portal, should that become necessary.

I had a smoky start with the fire in Mariposa Grove in Yosemite. I wasn't going to let that deter me though. I had my gear and seven days of food in my pack. I knew that once I was over Donahue Pass that I would likely be out of the smoke. So at 10:04 am on July 10th, I set off to hike the Nüümü Poyo (JMT) sobo solo and unsupported.

It was hot and the air was still. The smoke settled into my lungs and felt like it clung to my skin. My permit and bear canister were checked by a ranger within the first two miles of starting. She looked at me like I was absolutely insane after seeing my itinerary, but she didn't argue and didn't keep me long. I pushed hard, and nearly made it to Donahue Pass the first day. I bivvied for about 3 hours that first night, and covered about 45 miles the first day with 12,600 feet of gain.

Day 2 was rough. The heat and the smoke got to me. I had a dry, painful cough and my feet were already starting to blister. I had to sit down and do two foot care sessions. I knew I had to take the time to take care of my feet. In the second 24 hours, I made it to mile 85.5 with 21,000 feet of climbing. I think I laid down for a 2 hour rest on the second night somewhere near the Duck Lake intersection.

Day 3 is when things start to blur together. The days were hot and my feet throbbed, but I was still moving forward. I was dehydrated after the first two days, so I made a point of driving plus of water with Gnarly Nutrition fuel2O. I discovered that I enjoyed walking through the cool, full moonlit nights. The moonlight made the granite peaks glow in the night. I would walk until my eyes blurred and I got so tired that I couldn't move in a straight line anymore. I'd rest for 20-30 minutes and then get up and keep moving. I made it to mile 117.7 with 29,300 feet of vert.

Day 4 is when the hallucinations really started. I saw animals and fantastical creatures everywhere. I was followed by a big black wolf. The way I could tell they were hallucinations was that they wouldn't move. I started making moves up and over the passes. Once I made it over Muir Pass, I felt like this whole thing might be possible. I followed a thunder storm over Pinchot Pass. I made it to mile 151 with 38,530 feet of gain.

On Day 5 I went up and over Forrester Pass, then got chased by hail and lightning down the plateau to Tyndall Creek, where I changed into my rain layers and put all my gear in a waterproof stuff sack. I jogged out of there with only about 16 miles to the summit of Whitney. I could see it. It felt so close. That led into the most bizarre night I've ever had. The forest that felt magical at sunset felt sinister in the night. I wouldn't stop because of a haunted feeling I got. I jogged every moment I could until I got to Guitar Lake. The storm that rolled through left the ground wet and cold. I found a dry rock ledge to take a nap on around 12:30 am and fell into an uncomfortable nap for about an hour before getting up and starting my climb towards the summit of Whitney.

Day 6. I forgot to filter water at Guitar Lake, so I stopped at the dirty little pond at the marsh above the lake. The water tasted oddly sweet and had a slimy feel. Oh well. I just needed to get through the next few hours. I half-heartedly munched on a fig bar and ate a few chocolate espresso beans while I slowly climbed. The higher I got, the more stoked I got, but the tiredness I felt made my world spin and I stumbled frequently on some if the rough terrain. I made it to Trail Crest at 4:27am, and the summit at 6:07 am. Stopping my watch, I didn't know what to do with myself. So I sat for a few minutes and watched the sun rise higher. The wind was frigid and there was a thin layer of ice on the rocks. I slipped and pulled a muscle in my left quad, making the journey down from the summit a long and arduous one.

A variety of foods and snacks, plus Gnarly Nutrition Fuel2O and protein, for up to 7 days.