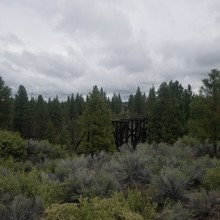 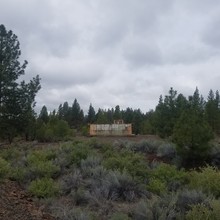 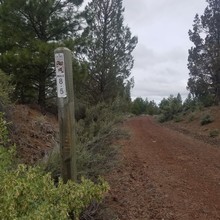 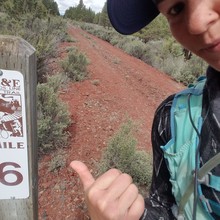 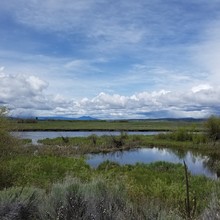 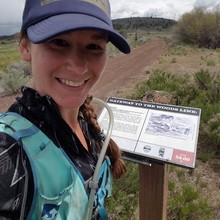 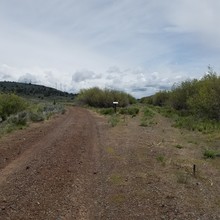 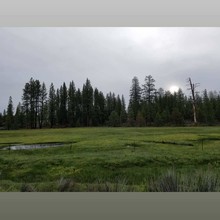 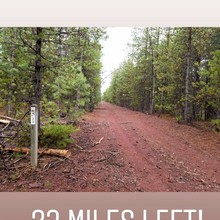 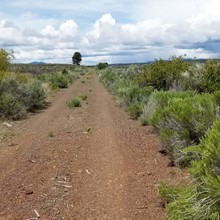 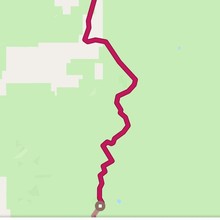 I chose to run the Woods Line spur that heads north near Beatty as a self-supported effort.

I had a weird feeling about this run from the beginning, and it was rife with technical difficulties from the start. I had no watch, because Jason had smashed his Garmin 935 the weekend before, which meant that he needed his 920xt back from me (I’ve been using his 920xt since he got the 935) for his big effort on the OC&E rail trail. Not having a watch meant that I had to use my phone to track my run, which in and of itself is not that big a deal - my phone has tracked accurately in the past - but it meant that I had to carry the extra weight of a battery pack.

The night before my run, Jason and I drove down miles of muddy and rutted dirt road to access various parts of the trail in order to drop caches of water and to find the northern terminus. What we found was that there was no simple way to get to the North end near Sycan marsh.

To get to the start, we drove down Forest Road 3207 to where it crosses the trail. From there, we traveled north on the trail itself. I will say that there are many locked gates on the trail to keep vehicles off (no motorized vehicles are allowed on the OC&E). Each one of these locked gates has an OC&E sign on it, as well as an additional walk-through gate for foot and bike travelers that is kept unlocked. After 1.4 miles, we came across another locked gate. This gate had no OC&E signs, no walk-through gate, and a faded old sign that may have been a private property or no trespassing sign at one point. We both agreed that, considering the rest of the trail had walk-through gates and were well-marked as OC&E trail and this one did not, we would consider this the northern terminus.

The GPS coordinates for the start are (42.7538053, -121.1331410). Although, if someone wanted to spend many more hours of driving, route-finding, and possibly trespassing, there may be access 7-10 miles further north near Thompson Reservoir.

We trekked back to the previous gate and set up to stay the night there. The alarm blazed at 4:30 amand I woke up with a weird feeling about this run. Maybe it was because I had no GPS watch, maybe it was the remoteness, maybe it was because I didn’t know what kind of people I might run into out here. As a solo female runner, this always plays in the back of my head.

We ventured back to the start, took pictures, and posted a video to Instagram stories. I was feeling the stoke and I was ready.

Jason left me alone at the start to go run his portion of the trail. All was quiet. The first light was starting to creep across the sky. I hit the start button at 5:33 am.

I felt good and I was moving well, pausing only to take a few photos of the beautiful meadows that are interspersed throughout the woods. I stopped at the historic Merritt Creek Trestle and grabbed my water bottle that I stashed there the night before. Luckily, I had cell service, so I took some video and posted it to my Instagram stories. I remember glancing at my phone and seeing my average per mile pace at 10:13/mile after my stop. I had 27 miles left to go.

What’s nice about this trail is that there are mile markers every half a mile. I was running from the north to the south, so my mile markers were counting down to the end. I posted another photo to Instagram stories of the 23-mile marker. I’m not sure what time it was.

I started experiencing some stomach upset, but kept pushing through. When I hit the 15.5-mile marker, I looked at my pace and time. I had been running for 2 hours and 47 minutes. I remember that very specifically because I was pretty darn happy with my pace.

I was in and out of cell service the whole day. At mile 21.3, I must have gotten service because several text messages from Jason came through. I paused and responded with “I’m 21 miles in!” I locked my phone and put it back in the front right pocket of my running vest, like I always do. I was still feeling good and at the time my phone said I was moving at around a 9:47 minute per mile average pace. Woohoo! I was cruising.

Not long after, I felt a buzz in my pocket. I ignored it, thinking that I got service again and it was a notification from Facebook or Instagram that wasn’t important at the moment.

I continued on and came across another beautiful meadow. Grabbing my phone out to snap a picture, I came to a sudden halt. I stared at it in disbelief...my phone was on the Welcome screen and was prompting me to set up my new phone....

It had factory reset itself. All of my data was gone. My Strava data, my time-stamped photos, all my apps, all of my texts, all of my proof… Everything was gone.

I wanted to give up right then. I wanted to sit down and cry a little. But I also knew that I would finish this thing. At the very least I would have had a beautiful run through the Oregon countryside (not to mention it was my only way out). I had to get my phone set back up to the point where I could see what time it was so I knew what time I finished. I walked for what seemed like too long, trying to go through the process of setting my phone up with limited service. I just hoped that I could get enough signal for it to find my time zone. I knew I wouldn’t be able to download any apps, but at least I could take more photos and record the finish.

When I found a spot where the service was decent, I stopped for a while and it finally found my location. I was back in business.

When I got to wi-fi later, I was able to look into whether or not I actually had proof that I completed this run.

Luckily, Google is a spy and was creeping on my movement from the beginning. I was able to see exactly when I started running and exactly when my phone reset, due to the location timeline (see screenshot).

It confirms that I started at 5:33am. It stopped tracking me at 9:12am when my phone did its thing.

Thanks to my Instagram stories, I have some photos and video from the first half of the run, although, unfortunately, none of them are time-stamped. But at the very least I do have proof of the start time and the end time.

No matter what, this trail is beautiful and extremely remote. It is mostly well-maintained, but some sections of trail are washed out and criss-crossed with fallen trees. You do pass by some houses on the Northern portion of the trail. Some of these houses look like beautiful off-grid vacation homes and some of them look like there may be some illegal drug manufacturing going on… But really, most of the buildings looked unoccupied. On the southernmost section, the trail turns to dirt road and ranch access. Cows were the only witnesses to me passing through (as well as Google the spy, of course.)

All in all, it was a beautiful run on a lovely trail through gorgeous country. I would absolutely do it again... But with a GPS watch.

Oh, and by the way, I bought a GPS watch.