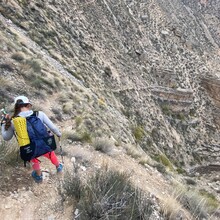 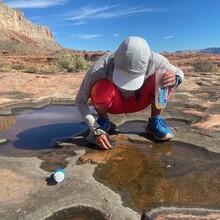 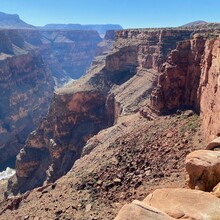 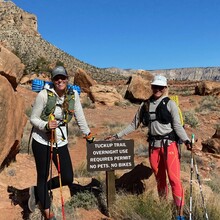 We went for it over the course of the first few days of November -- thinking we should easily be able to complete the trail sub-48, if not faster than that. Ha!

A couple of takeaways:

This "trail" (which really should be though of simply as a backcountry route) can go faster, but it'll require some careful strategy choices.

Such a wild adventure!

The Tuckup Trail (aka the "Magic Trail") was far more challenging than we anticipated. I (Ashly) originally thought we would be able to complete the route in under 24 hours, while Sunny's estimate was 36 hours. That quickly changed as we started navigating the Esplanade. Our finishing time estimates changed to 48 hours... then to 72.

We were lucky on two fronts; we had planned enough calories for three days, and there was a recent enough rain that there was some water in potholes along the way. I'm not so sure that we would have been able to finish this route if there had been no pothole water.

We faced many challenges, including lots of cactus spines in the feet and shins, century plant stabbings, heat, dehydration, and challenging navigation.

Sunny captured the adventure perfectly in her trip report, so I'm not going to go into a crazy amount of detail here. I also might be writing a trip report of my own. If, or when, I get that done, I'll be sure to post it.