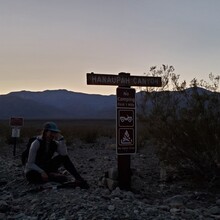 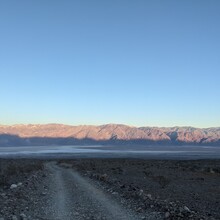 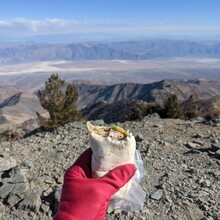 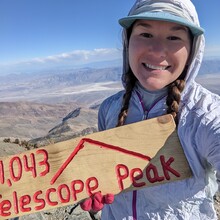 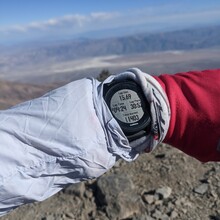 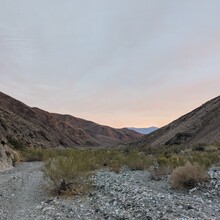 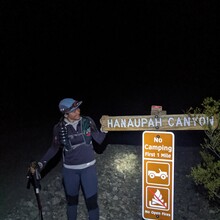 I was nervous going into this thing. Like, REAL nervous. I had attempted this route once before, last January, almost a year ago. I encountered ice and waist-deep snow on the first go-round, but this time it was nice and clear.

I woke up around 3 am feeling a bit nervous. Can I pull this off? Will my body hold up? I could hardly eat. I barely got a protein shake down. I tried to shrug it off. Deep breaths.

I packed 3.5 liters of water, all with Tailwind mixed in. I knew I'd need the liquid calories if I couldn't eat solid food. I'm glad I had the Tailwind because the trend of not being able to eat lasted the whole day. I did pack some Spring gels and a hand and avocado wrap just in case my stomach decided to start cooperating.

Standing at the intersection of Hanaupah Road and the West Side Road, I felt the nerves creep in a little more. I hit start at 4:10 am, and set off at a brisk walk up Hanaupah Road. Five miles to the mouth of the canyon, then three-ish miles until I took a hard right and started the off-trail scramble to the ridge.

I was able to eat a couple of gels while I jogged off and on along the ridgeline. The last time I was up here, it was covered in snow. It looked vastly different this time around, like a completely different route.

Use trails appeared every now and then and I took advantage of being able to shut off my brain while I hiked/loped along them. I came across the section where last time I was buried in snow. The red colored talus shined warmly in the sun as I watched a little fox gallop across and disappear into the bushes.

The ridgeline got steeper and my stomach turned South again. I sipped my Tailwind.

I was surprised when I stumbled onto the summit trail. I abruptly went from feeling like I was alone in an extremely remote wilderness, to suddenly being surrounded by day hikers.

The wind was frigid on the ridge and my hands almost immediately went numb. I walk-jogged to the summit, snapped a couple photos, ate half of my ham & avocado wrap, then turned and started slowly jogging down the trail. I thought I was 30-35 minutes behind Kelly's pace, but it turned out I was only about 16 minutes behind. Nevertheless, I knew that it was going to take some effort to catch back up.

Itend to excel at techy downhills, so I knew that it was possible for me to rally on the way down. I started feeling better almost as soon as I veered off the ridgeline trail. I scree-skied, jogged, slid, and (occasionally) felt like I was flying down the steep slopes. I became intensely thirsty and finished off the water in my pack. As soon as I got back into the canyon, I snagged my extra liter and started jogging the best I could. Once I got on the gravel "road" again, I was able to find a semi-comfortable cruising pace. It felt good to get into a normal running stride after so much climbing and descending.

The last five miles were simultaneously glorious and awful. It felt like they dragged on forever, but the views were phenomenal. I was chasing the shadow of Telescope Peak as it crossed the Badwater Basin and crept up the  mountains on the other side of the valley.

When I knew I was within a mile of the end, I (unsuccessfully) tried to pick up the pace. I tagged the Hanaupah Canyon sign 12 hours, 46 minutes, and 11 seconds after starting. Jason Hardrath was there waiting for me with a camp chair, a cold beer, food, and my sandals. I sat down next to the sign, overjoyed that I accomplished this thing that I failed at doing almost a year ago.

HUGE shout-out to Kelly Halpin, who set the first solo women's time in heinous conditions. So much respect!

Nutrition:
Tailwind
Spring Energy gels
Ham & avo wrap
(I took in about 1500 calories during the whole day, with about 1000 of those calories being Tailwind)

This route is phenomenal and totally worth doing, even if you're not going for the FKT. Heck, maybe especially if you're not going for it. There's so much to see and take in and I think that doing it at a more leisurely pace allows you to really absorb it all. As both Kelly Halpin and Abby Hall mentioned in their write-ups, you trek through four different ecosystems as you make your way up the mountain!

Side note: there is a spring in the canyon, but there are signs posted saying that the water may be contaminated due to illegal activity in the canyon.