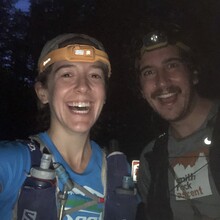 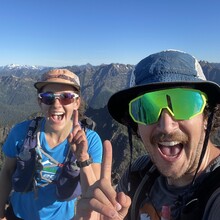 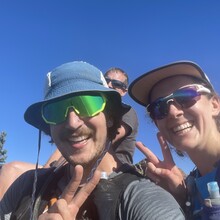 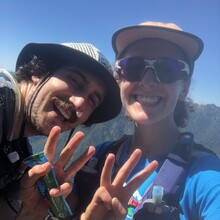 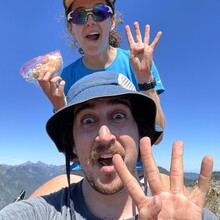 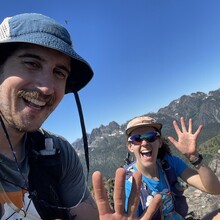 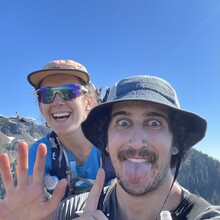 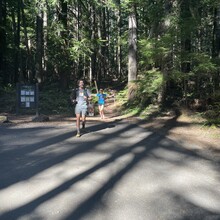 We started at Big Creek campground just before dawn and followed the standard route up to Mt Washington. We dropped down to traverse over to Mt. Ellinor and started out a little too high so had to down climb until we were below the cliffs and then scrambled over to Mt. Ellinor. We were not sure what water would be along the route and Barrett's family was hiking Mt. Ellinor the same morning, so rather than stashing water we decided to do this as a supported effort and met up with Barrett's family along the Mt. Ellinor trail who gave us water and encouragement. We then hopped on the primitive Mt. Rose connector trail that took us to Bear Camp. After Bear Camp we crossed a small stream, so the water support drop was probably not necessary but better safe than sorry. We ran the Mt. Rose loop, crossed the stream again where we filtered a little more water, and made it back to bear camp. We followed the primitive trail until it disappeared at Bear Gulch and then bushwhacked our way over to Copper Mtn. Not too bad of a bushwhack, some down trees but not too dense. Really bad flies though. We scrambled our way up to the east summit of Copper and then dropped down a little and scrambled up to the west summit. We dropped down to Wagonwheel lake with only a couple wipeouts on the slippery steep dirt. We found some flagging that made the bushwhack pretty straight forward. We had to go through some devil's club right before the lake so we were happy we brought pants and gloves. We went up the steep trail to Cub Peak and did the short scramble to the summit before beginning our long descent down to Staircase where Barrett's mom Cameron picked us up and we got much needed water. GPS seemed a little off in some spots. Super solid adventure! Couldn't have asked for better weather.