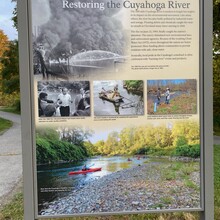 It was a prefect fall day with a slight breeze, sunny, and amazing fall foliage.  At one point running down a ridge in the Brecksville Reservation the sun was streaming through the trees as it was snowing leaves and hailing acorns.  Just spectacular.   I had scouted the whole route extensively and ran at least 15 miles of it previously.  So it was a nice mix of familiar terrain and new sections.  When I crossed the Cuyahoga River at the Brecksville train station I was inspired when I saw a plaque describing the cleanup of the Cuyahoga River.  My father, Ben Stefanski Utilities Director for the City of Cleveland who established the Regional Sewer district to stop dumping of sewage directly into the river is pictured next to Cleveland Mayor Carl Stokes.

Ran North to South starting just after 7am in the Bedford Reservation. I ran solo carrying all my food and filling water bottles from the drinking fountains at the Brecksville train station, Boston Mills visitor center and the Hunt Farm Visitor Center.