Cuyahoga National Park is not your typical National park.  https://en.wikipedia.org/wiki/Cuyahoga_Valley_National_Park  It was a designated a National Recreation Area in 1974 but wasn’t given National Park status until the year 2000.  The 50 square mile park is the only national park in Ohio.  It has been cobbled together from a patchwork of parcels centered around the famous Cuyahoga River.  Locals call it "The Burning River" with pride as it has been cleaned up and last caught fire over 50 years ago.

The diversity of trail types and surroundings are amazing for a national park.  At times you will find yourself feeling like you are in someone's suburban backyard.  At other times you will feel like you are in the remote wilderness. You pass through the historic town of Peninsula, OH.  The route follows the Buckeye Trail which is marked by signs and blue blazes on trees.  https://www.buckeyetrail.org/overview.php  There are countless trail and road intersections so a GPS with the route will be your best friend.

The North start/finish is in the Bedford Reservation on the Gorge Parkway about 50 yards from the intersection of Egbert Road at the gate to the park.

The South start/finish is the far trail sign at the Botzum trailhead immediately before the road crossing (extended from the original south end, which was the intersection of the West Bath Road and the the Buckeye/Deer Run Trail.) 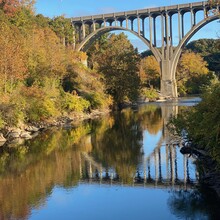 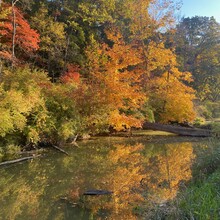 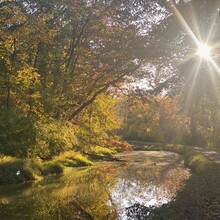 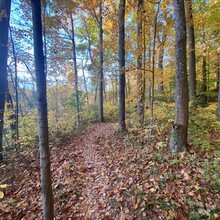 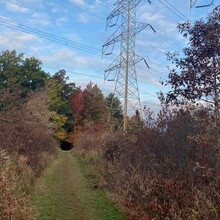 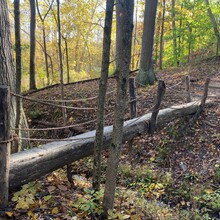 Ben, were you the author of the trans-cuyahoga-valley-national-park-oh which was very similar to this route?  That route was removed (without any attempts) after this one was published.

2. I can't tell for sure, but you may have followed the old route of the BT just south of the turnpike.  That area has exposed the pine tree roots due to excessive use, so the BT has elected to relocated to the Valley Trail at that location.

3.  In Peninsula, this route continued on OH-303 across the bridge then down to the Towpath.  Although this was the route of the BT several years ago, the current route turns north on Locust St, west on Mill St W, follows Mill St to the Lock 29 trailhead parking lot, then joins the towpath to go south across the river and under OH-303.

4. This route turns left on Deer Run Trail and ends abruptly at W. Bath Road.  The BT turns right on Deer Run Trail, passes through the trailhead parking lot, descends via switch backs to W. Bath Rd, crosses W. Bath Rd, meanders behind a barn and near Yellow Creek to return to W. Bath RD., where this route ended. From there the Buckeye Trail continues on east on W. Bath Rd to the Towpath Trail, then south on the towpath trail to the Botzum Trailhead at the southern extent of the Cuyahoga Valley National Park.

I don't want to in anyway disparage your effort, but I have to say that I was excited about the original route that was proposed, which I believe followed the Buckeye Trail from the northern extent to the southern extent of the CVNP.  It's convenient that there are parking areas at both limits.  I think it's also fair to say that using the BT exclusively, is a better way of defining a particular route - the description of the route would be described in the Bedford and Akron Sections of the Buckeye Trail available on weatherproof paper or electronic pdf through Avenza,  or runners could follow along with the Guthook Ap.  I should note that the trail was recently rerouted just south of Blue Hen Falls which I see you found out based on your track.   Having said that, the quandary I have is this, should there be another route established that does follow the BT exclusively from point to point?   I welcome a conversation and I am curious why you chose to follow the Deer Run trail down the steps and end at Bath Road.

Hello! This is a great route and I was going to take a stab at it after doing a good bit of CVNP trail running this winter, but had a couple of questions.
1) for Randall: is there a reason the BT uses Sagamore Rd to get to Valley View Rd? That seems less desirable than Ben's use of the Sagamore Creek loop.

2) Otherwise, I agree that following the BT would generally be a better idea. I would rather take the counter-clockwise route at Deer Run, cross Bath, do the little bit of BT trail south of Bath, and then take Bath Rd down to end at the Bolzom trailhead, which I think makes for a slightly better CVNP traverse route. I'm 50% confident i could do that route faster than Ben's original route time. Any idea how FKT bylaws work? If I do a slightly longer route faster, can that set a new FKT and re-establish the route for future use to better follow the BT and end at a better logistical endpoint?

Reconned the top section and didn't realize that the BT is mostly trail down to Sagamore Rd. I'm just planning on using the BT from Bedford to the Bolzom trailhead this weekend for an attempt.

Gave it a go yesterday but came up a couple minutes short. Started with 4 guys and followed the Buckeye Trail all the way down, which looks like it adds ~ 0.5 mile to the top portion to Station Rd compared to the Sagamore Creek Trail. One guy dropped off at mile 10 and another at ~ 16 and two of us finished the route. Added about a mile due to navigational error by Deer Lick Cave and super muddy in the middle section between Station Rd and Penninsula made for slow going. Garmin/user error had me misinterpreting the available time until it was too late to gain it back. Super fun day, regardless. Will give it another go when it's dryer. Spring is probably not the best season for this one...

Nice work, Ryan! I just penciled in an attempt on my calendar for July. We'll see how crazy I am to try this in the dead of summer.

Dumb question. Does starting at the south or north of the route affect the final leaderboard?

You can run either direction. Go whichever way is faster!

I plan on attempting this on 8/27, starting at the Bedford reservation and ending at Botzum.

Plan on second attempt Sunday 9/4. Starting at Bedford reservation and ending at Botzum.