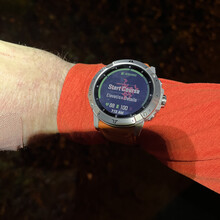 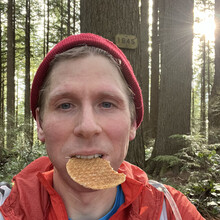 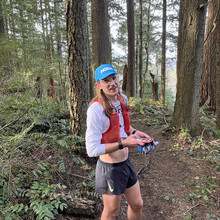 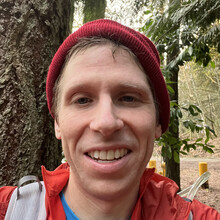 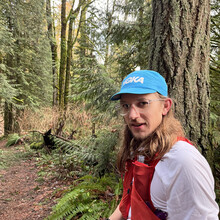 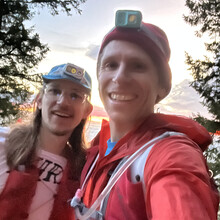 We started at 7:17 AM PDT at the Sunrise Pl trailhead (first photo is of watch from right before the run started), and did the suggested route in the description.  We had four drops where we stashed food and water before we started the run.  We arrived at the first drop at mile 13.8 at the Bullitt Fireplace trailhead just after 11 AM.  We continued on to mile 21.5 at the Margaret's Way trailhead just before 1 PM.  Next we climbed up to West Peak, arriving just after 2 PM (first pictures of us), then onto the third drop at mile 32.1 at SE 122nd St Access (next pictures of us) where we arrived just after 4 PM. Next, we climbed up to Debbie's view, arriving just after 5 PM (picture of both of us).  After that, quick descent to the last drop at mile 37.9 at Sierra Ct SW Access around 5:40 PM.  Finally, we finished the run at Sunrise Pl around 6:57 PM.

The weather was good, temperatures in the mid 30s to mid 40s.  No rain, but with heavy fog at times (in the morning, in the early afternoon on Margaret's way, and in the evening on the E Side trail).  There was some sun though higher up on the mountain in the mid to late morning, and mid to late afternoon which was much appreciated.  There were quite a few blowdowns on sections of the mountain, specifically on the central peak trail near central peak and on the east side trail.

It was a long day, with lots of highs and lows.  Very satisfying effort though, would highly recommend this route.