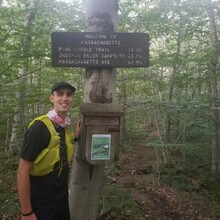 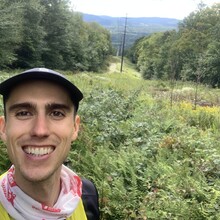 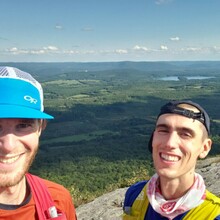 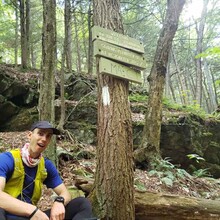 I decided to go in the southbound direction, starting in Vermont, with the support of my good friend, Ben Johnson. We started hiking from County Road in Vermont and came to the MA/VT border at 6:19 AM on 9/5. This is when the fun began. Ben turned back for the car and I headed down my first descent.

I went at a decent pace and crossed between North Adams and Williamstown as the sun was peaking over the mountains. It was quite sublime. From there, I took on the grueling climb up to Mt. Greylock, the highest point in MA. It was on this climb that I tweaked my lower back. Thankfully, I was able to use my trekking poles to keep a more upright posture and avoid debilitating back spasms, but it was still a set back. Ben met me near the top of Greylock and helped me finish the climb. We enjoyed the view before I scarfed down some food from the car, smeared icy hot on my back, and ditched my trekking poles for the descent into Chesire.

This was probably my biggest mistake of the trip. I took the descent a little too hard and ran more of it than I probably should have. Coming into Chesire, my quads and knees were aching terribly. Thankfully, Ben had a chair set up and I was able to relax a bit as I ate a PB&J. Heading out of Chesire, I made my second biggest mistake and missed a turn, adding on about 0.5 miles to my trip. The climb out of Chesire was harder than expected and I sorely missed my trekking poles.

The rest of the section to Dalton was quite pleasant and runnable, though I started to hit a low point because I had not had enough caffeine. Ben helped me finish the section into town where I proceeded to down a Coke and some Ramen. This turned out to be a bad combo and I was thankful for a nearby gas station toilet. After a longer than anticipated stop, I took off from Dalton toward Washington Mountain Road. I had to walk a good chunk at first to let my stomach settle, but was able to do some running on fair terrain after that.

I came to Washington Mountain Road after about 40 total miles a couple hours before sunset. Ben had made me an amazing date and peanut butter wrap (my new favorite running food) and I was able to kick my legs up for a bit. I changed into my night time gear of leggings, longsleeve, and grabbed a headlamp before heading back out. I was able to do some more running before sunset, but settled into a nice speed hobble once it got dark. Thankfully, shortly after dark, I met up with a new friend, Matt, who lives local and he guided me to the next aid station just south of Goose Pond. He then helped guide me down through Tyringham. I was super thankful to have his company and navigation skills as my brain was starting to get tired.

Matt split off from me around 2 AM as I made my way past the Shaker Shelter and took on the climb out of Tyringham. I was afraid of seeing bears so I played music on my phone and sang along. Thankfully, the scariest thing I saw was a mellow porcupine. As I started climbing out of Tyringham, I did start to see tents popping up everywhere, only to realize shortly after that they were rocks. I was approaching 24 hours without sleep and my mind and body were feeling it. I hiked a good portion of the night alone, but fortunately had Ben meet me for the last few night miles. At this point, I was miserable and my right IT band was on fire. Every downhill step felt like a knife was being twisted into my leg. Ben was a trooper and put up with my whining for a couple of hours. I also knew that when I hit the car (~mile 70) I could sleep. The drive for sleep was strong and it made me complain even more. The icing on the cake was a light, unexpected drizzle, that hit just before we made it to the car.

I crashed real hard on a sleeping pad, covered only by a rain jacket for about 1 hour. The sleep was great for my mental state, but every part of my body stiffened up, especially my IT bands and quads. Miraculously, my back was no longer an issue. I ate some oatmeal and had some coffee before gearing up for another section. At this point Ben was telling me I only had 15 miles left, but I knew he was mistaken. It turned out to be another 23 miles!

Coming off of some sleep, I actually did fairly well. I was in good spirits and the section to US 7 was calm and peaceful in the morning. A lot of it was also runnable. I ended up sneaking in a sub 12 minute mile at one point, even though my IT band was still in rough shape. At US 7 the heat of the day was starting to set in. I met Ben in a thrift store parking lot and tried to gain some energy for the final section to CT. Looking at the elevation profile for Mt. Everett made me cringe. I had 15 miles to the border and 3000 feet of climbing left.

The approach to Mt. Everett was actually very flat and fun to explore. There were lots of day hikers out and some were even foraging mushrooms. This section was probably the most runnable, but my body was done running, so I just walked as fast as I could. Beginning the climb up Mt. Everett was disheartening, but I took it one step/scramble at a time. The views along the way were stunning, but my fatigue was preventing me from pulling my phone out for pictures. I had one goal and that was all I could focus on. Getting up to Mt. Everett proved challenging, but getting down was infinitely harder. My IT band seared with every step and the descent was steep and rocky. I was slowed down to 1 mph for awhile which really dampened my spirits. Ben had parked in CT and was hiking in to meet me for the final miles. He ended up stopping at the top of Race Mountain to take a nap because he was just as sleep deprived as I was. He was serving as my crew and my pacer, finishing the weekend with a total of 45 miles. What a guy! I eventually met Ben at the top of Mt. Race and we prepped for the final descent to the CT border. This section was also one of my favorites in terms of views, but my level of pain and heat exhaustion kept me from enjoying it to the fullest. My moaning and groaning nearly drove Ben insane as we navigated our way off of Mt. Race. With about 1.3 miles to the border, we came across a stream which was life changing. I was able to cool my body temp down and rehydrate. The temptation of finishing carried me the rest of the way. I believe at one point I told Ben, "I don't care about the FKT, I just want to lay in a bucket of ice." I hobbled down the rest of the descent and became filled with joy when I heard the river the marked the border to CT. I touched the sign and sat down with a feeling of utter exhaustion. After basking in the FKT for a few minutes, Ben and I moved on because we still had around 2 miles to go before we got to the car, which we wanted to do before sunset. The hike out was actually quite beautiful and there were lots of campers in Sages Ravine. The FKT was an experience of a lifetime for me, but I am looking forward to some slower paced hikes in the future to take in the views of the AT.