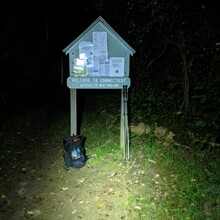 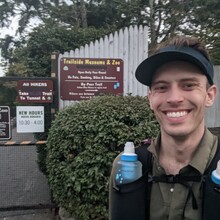 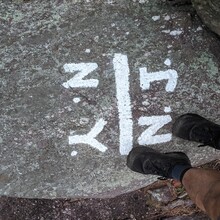 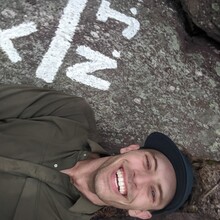 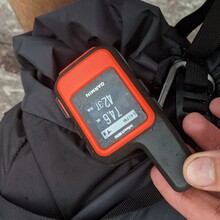 Also this is a list of everything I carried: https://lighterpack.com/r/qluv3n

I took the train up to Wingdale on Monday afternoon, with hopes to hike to the border and find somewhere to sleep for a few hours. I took the wrong trail up and ended up having to backtrack to the train station and start again finding my way to the border. After checking out the border and looking around, I eventually found a nice enough place to cowboy camp on the NY side, ate dinner, and was asleep by 7p. I had an alarm set to wake up around 11:30p and made my way back to the border after packing up. I started from the border around 12:05am on Tuesday (see attached photo) and by 5:15am had covered 15 miles, meaning only about 75 left! I made it ~27 miles to RPH by 9:35a, where I had been planning to take a break but felt good and didn't really need it. A few minutes later though I had to stop and retape my foot, make sure everything was good and I'd be able to keep going. Two years prior I had hiked this whole section over about five days, so I mostly knew what I was in for but I was still surprised at how well it was going. I covered 36 miles by 1:15p and 40 by 2:35p, and hit 50 just after 6p! I was going to stop at a campsite around 50 miles in to eat dinner and take a nap, but I was ahead of schedule and the mosquitoes were pretty brutal so I kept going. The Bear Mountain zoo closes at 4p, so I took the official alternate route around the zoo. I couldn't find it on a map, but it hugs the wall of the zoo and then crosses under the road in the same tunnel and is approximately the same distance. I stopped at the Bear Mountain picnic area for about an hour to rest and eat dinner, but decided it wasn't the right place to nap and kept going. I was really torn on whether to stop and rest properly or try to hit 60 miles in 24 hours. I ended up stopping to nap for half an hour or so somewhere between Bear Mountain and West Mountain, then got up to light rain and fog and hit that target. I was hoping to keep the same pace for the next 12 hours and finish a little after noon, but the fog really slowed me down. I was hiking at maybe a mile every 35 minutes and it was exhausting; I couldn't see more than a few feet in front of me and ended up carrying my headlamp in my hand to mitigate the refracting light. I was disappointed to be moving so slowly through Harriman; I spend most of my time hiking in this park and I know how easy it is to cruise through those miles. It's Wednesday and by 2a, I still have a marathon of distance remaining. The fog is supposed to last at least until sunrise, so I pulled over to nap and set an alarm. I must've shut it off because I ended up sleeping until 6a, way more than I had planned and it wasn't very restful. I'm slow to pack up, but by 710a I have 24 miles to go. I'm still moving slowly, but at least I can see now. By 9:30a I still had 19 miles to go, but I couldn't figure out what was going wrong. I didn't feel sore, I wasn't hungry, I wasn't actively tired; I think I just pushed too hard and waited too long to rest. I had 15 miles to go at 12:25, and less than ten at 3p! I finally crossed the border at 6:42p (see attached photo), but I still had to hike down the ridge in the dark and catch a bus back home. I ended up sitting on the side of the road for an hour or so waiting for the bus, but I made it home around 11p.

I used Guthook for navigation and distances, as well as to confirm water sources and figure out if I needed to carry anything extra. Water was never a problem, although one of the filters I was carrying slowed down pretty significantly by the end.