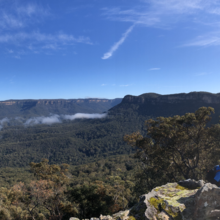 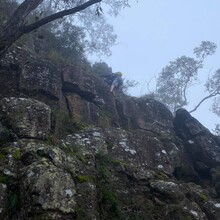 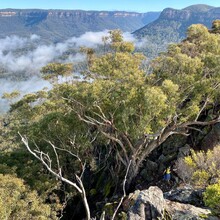 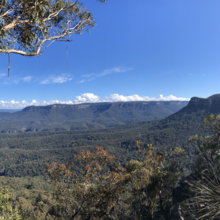 We started at 7:15am on a winter's day and finished at 4:04pm, happy to beat the sunset. It was our first time on the route, so we gave up a few hours solving the enjoyable puzzle that is Korrowall Buttress. We also lost perhaps an hour descending the Miners Pass, whose route was concealed by fallen trees and recent floods. Brendan's photos. My Strava write-up (pasted below):

"Mt Sol was floating in a sea of mist just after sunrise. My eyes traced Korrowall Ridge, rising from the mist, up a gentle gradient culminating in Point Repulse. I knew that if we reached the base of Point Repulse the only way forward was a thin ledge above a precipice.

When we hiked up to the buttress, I realised the gentle gradient I’d looked at from 7km away was actually a serious of boulders balancing on a spine. The navigation became interesting immediately. Climb straight up the rock or follow a thin ledge above a precarious fall?

There were three or four moments where the buttress thinned to a knife’s edge, sheer faces loomed in front of and below me, and I asked myself “Is this really the way forward?”

Some impressions: a brief moment trusting my body to a single rock above a void, crawling at an awkward angle. A ledge which led to a cave which magically contained an exit slot. A tiny gap between rocks to squeeze through at the end of the line.

One solution was particularly neat: we scrambled up a giant boulder which obstructed the knife edge, peered down off the end of it and thought “Absolutely not”. We transferred to a pagoda behind us on the peak, climbed down a crack and wrapped around a ledge. There was no way forward at that point but a short climb onto a loose scree slope.

When we eventually reached the infamous ledge around Point Repulse, I discovered that it didn’t scare me as much as I’d expected. The morning full of awkward exposed manoeuvres had tested my nerves, but not a few steps across stable ground.

The Miners Pass looks unlikely from above, but turns out to be fairly sensible if you stay on route. It was trickier than expected because weather events have obscured and blocked the route. If not for Brendan we might not have worked out the way down - maps, compass and GPX all proved useless. In the end we used the photos in this blog to recognise which down-scrambles to take.

Very cool to turn around after doing the Miners Pass and see The Col (Mt Solitary logbook) from a different angle. Managed to reach the gate at Kedumba Valley Rd well before sunset. Covered in cuts but extremely happy. I don’t think any adventure has induced so much fear in me before. Gorgeous views and glad to tick the box but I think tomorrow will be my rest day 😂"