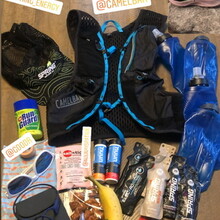 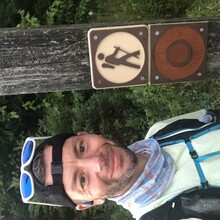 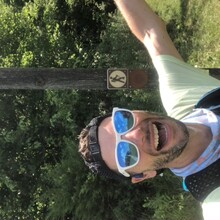 Well, we are in a COVID cancelled world right now, so what better time to try an unsupported FKT? Since all Five Rivers MetroParks water fountains are turned off this would definitely be more difficult without since there was no availability to refill water without filtering it from the river.

Weather in Germantown, OH called for highs in the 90’s today, so I wanted to get started as soon as there was enough light to run without a headlamp. I was already going to be loaded down with all the fluid and fuel I would consume on the run, it was good not to have to carry a headlamp too.

I wanted to do a full loop style where I would not be passing back by the car, so I chose the northwestern most parking area at Germantown Metropark (Sledding Hill Trailhead on Boomershine) and set out on the CCW loop at 6:30 AM. Temps were great in the morning, but the downside to being the first one on the trail is the abundance of spiderwebs. Those things are sticky enough on their own, but get a light sweat going and they really cling to your face and arms. I do t know why, but that feeing of spiderwebs in my face just really gives me the creeps.

I felt great moving through the early hills and across the dam and spillway as I left the first part of the Germantown Metropark section. Previously, I had run both the Germantown and Twin Creek section of the TVT, but never used the connector trail, so this was uncharted territory. I have to say, the connector trail by Germantown Metropark is wonderful, with sweeping switchback and float single track. Unfortunately, it doesn’t take long to turn into grassy meadow, then a paved section and onto the roads. I knew there was some road sections, but they are boring and really suck the life out of you.

Once in the Twin Creek Metropark section I was immediately faced with the longest climb of the loop up to the High View lot. The rest of the Twin Creek section went well as I was conserving fluid and fuel knowing that the sun was getting higher, the temperature was climbing, and I was going to be heading back uphill most of the way with some heat and sun bearing down.

Thats when things started to go off the rails. 20 miles in, the connector road and trail were now completely exposed to the sun, and shade was hard to find. I wasn’t able to conserve any more fluids and quickly I was down to my last 20 or so ounces. There was also a lot of foot traffic on the connector which caused me to keep my buff over my face far more than I would have liked to. I powered through it with a mix of walk/hike, but I lost some time there for sure.

I felt some new life In my legs once I got back to the trail section of the connector. I was out of the sun and letting the trail now dictate run vs. hike. Once I got back into Germantown Metropark I knew I was in the homestretch. I was so excited to see the last road section and river crossing at the north end of the park. It was all cruise control from there to the finish.

I included a picture of my load out to show everything that I used.

All in all it was a great experience. I don’t this the FKT will hold up that long, so I’m excited to run it again in the cooler months.