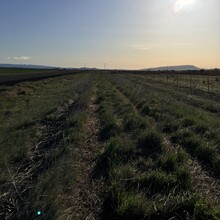 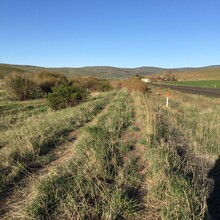 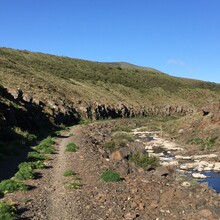 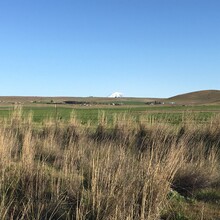 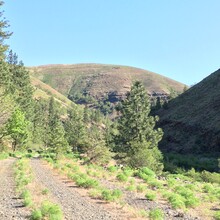 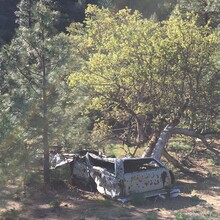 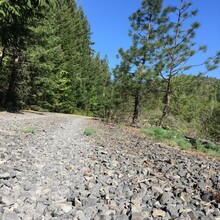 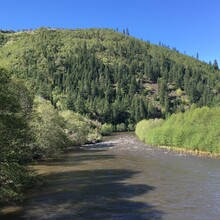 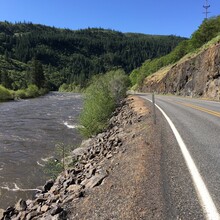 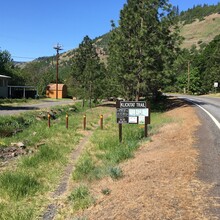 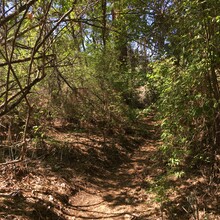 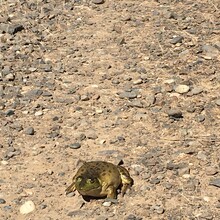 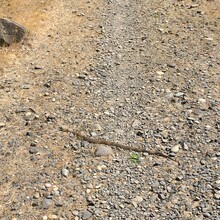 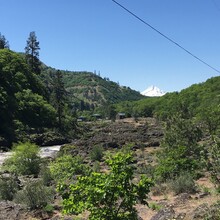 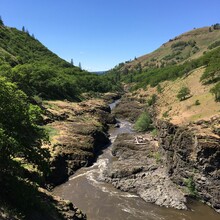 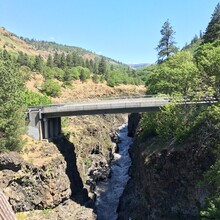 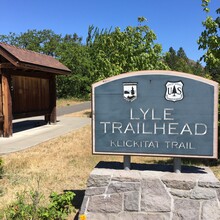 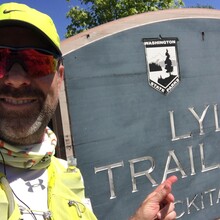 I had been scoping out this route for a bit before Steve Wagoner set the first FKT (thanks, Steve).  It's a nice run in, from roughly east to west (really, east to west and then south).  Generally had a good run, aside from one face plant around 8 miles, just after I congratulated myself for not yet falling on all the rocks (that figures).

I went unsupported, using a Salomon Advanced Skin 12 and lugging all the junk I'd need, including 3L of water and some food.  Weather (early May) was good: started in the low 40s with a brisk west wind, and ended in the low 70s with a brisker west wind.  Mostly clear skies with high clouds (bring sunscreen).  I overpacked because I didn't know how bad the wind would be (it was forecast into the 30-mph range), so carried lots of unnecessary mass.  The run was relatively uneventful aside from one fall.  I started at Uecker Road and traveled west, as Steve did.  There was a knocked-over Klickitat Trail sign there (it was windy) to mark the beginning, but that was it.  At Harms Road, there's a Port-a-Potty and another sign, but you shouldn't be starting there.  The first few miles are relatively flat and marked by many cattle gates; please be sure to leave then (open/closed) as you find them to keep the local landowners happy.  Swale Canyon is a good long downhill stretch, and then along the Klickitat River is more gentle downhill.  The trail is generally easy to follow and is mostly some sort of rock, ranging from packed gravel to straight up railroad ballast.  It can be mentally annoying if you're trying to set any kind of rhythm.

The trail is "discontinuous" in one sense, because the bridge crossing the Klickitat River in Klickitat is missing.  So, around mile 14, as you come out of Swale Canyon, you need to head out to the right (there's a trail head with a Port-a-Potty) and then go left on the asphalt road (Horseshoe Bend Rd).  You then cross the river and turn left on Hwy 142 toward Klickitat.  (Steve Wagoner's route is correct in this sense, contrary to the initially-submitted route proposal.)  After 3 miles on the shoulder of the highway (which is narrow but fairly innocuous because of low traffic levels), you enter the town of Klickitat and rejoin the trail at Durkee Road (on the right).  I initially missed this turn and ran through the town of Klickitat before realizing my mistake and backtracking to cover the missed section (so, the overall mileage is roughly 30.7 versus the 31.3 reported by my tracker).  If you are still on the road when you get to the Country Market, you've gone too far; go back a couple blocks and catch the trail.

The trail through Swale Canyon is officially closed once the Department of Natural Resources issues a "high" fire alert level, often in June or July, and may stay closed until October.  (https://parks.state.wa.us/869/Klickitat-Trail)  I don't know if the trail is blocked, but it's something to keep in mind (might they issue a ticket if they find you out there?).

I'd recommend carrying a satellite communicator even if you don't think you'll need it (I carried a Garmin Inreach Mini for my family's peace of mind).  This route isn't really "out there" in the same sense as some high mountain routes, and it's not of epic length, but it's also true that on many sections of the trail, if something goes wrong you are far from help and there is no cell coverage.  Especially in Swale Canyon, there is little or no road access and little foot or bike traffic, and any serious accident could be problematic.  For the same reason, I recommend traveling east to west, to cover the most remote miles first.