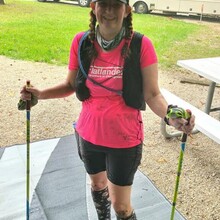 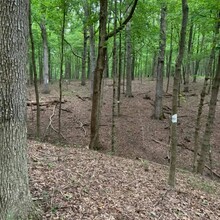 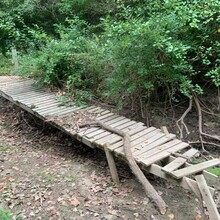 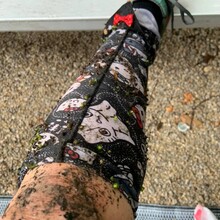 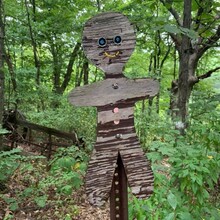 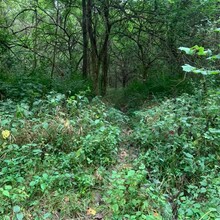 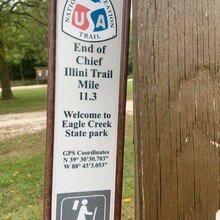 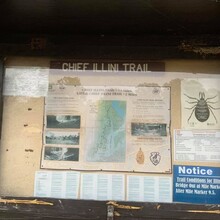 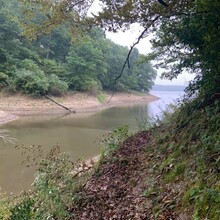 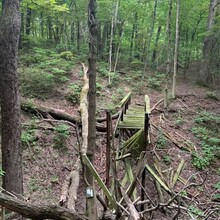 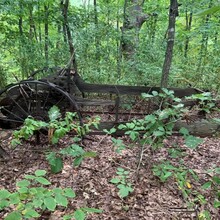 I did this trail starting at Lone Point campground, where I also camped. I carried two liters of water and seven Spring Energy gels, which were sufficient for doing the course unsupported. I did not see any viable water sources on the trail unless you would want to filter the lake water, which I would not recommend given that it is surrounded by farmland. The campgrounds at each end have seasonal water if you want to go a bit off trail to get it. This trail was a bit insane! While the trail appeared to have fresh paint blazes on trees it was otherwise barely maintained. Right away there was a big washout with a drop off. I managed to get around it fine on the way out when it was dry, but coming back was another story. Later, there were two bridges out that were easy to get around when dry. The main one does require a bit of bushwacking down a ravine though. Hardly anyone uses this trail (I saw no one else the whole time) so it was a mess of overgrowth with massive spider webs, nettles, poison ivy, sticky burrs (tons of them!), chiggers (discovered through post run itches), and it is crazy slippery muddy in a storm as I would find out. I expected it to present such challenges and wore calf gaiters and took my poles. I ran the first half using the poles to break webs, but still got a face full of spider web plenty of times. I think I accidentally ate one! :o There was also plenty of getting lost. At times there is no trail and you have to just look for the tree blazes. The blazes are plentiful, but regardless, there were multiple times that I had to wander a bit and search for them. Sometimes the blazes go multiple directions at cross trails, so having the route on a GPS is a huge help for this course (I used the Gaia app). On my way back a thunderstorm with downpours hit. This trail is pretty treacherous when wet! Very slippery with drop offs. I fell a couple of times even going very slow and using my poles. At the main bridge out it was not as easy to get up the ravine with it wet, but still not terrible. But at the washout I ran into trouble. I took the least steep way up and ended up clawing my way up it after I fell onto my belly. Go figure that the rain stopped pretty much right after I finished. I am a back of the packer and normally slow anyway, but this was a very slow go for me. I completely enjoyed it though, even though it was rather insane!