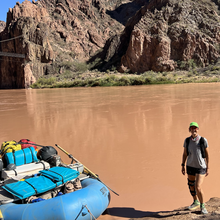 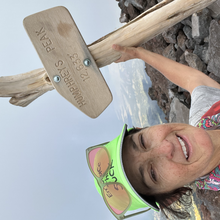 This route has been on my bucket list for a couple of years now--just too cool to do two iconic AZ climbs in one route! I finally made time to bang it out and I was hoping that mid-October would be the sweet spot between too hot in the Canyon and too windy/snowy on Humphreys. I reached out to Meghan Slavin (current FKT holder) and talked to her about the route she used, timing for the run and any other advice she might have--she was a great help in my pre-run planning.

I did not originally set out for the FKT--I was really just looking for a cool adventure run. After talking to Meghan, I did the math and decided that if all the stars lined up just right, I might be able to go just a bit faster.

I decided not to take the New Hance Trail--even though the distance was shorter--because of the primitive nature and technicality of the trail. I opted to come up South Kaibab and run the 10 miles down Desert View before jumping on Meghan's route following forest roads into Flagstaff and the Humphreys Summit Trail. This route ended up a little over 8 miles longer, but worth it to me to not have to negotiate the New Hance Trail.

After hiking down to the river, I refilled my water, took in some nutrition and rested in the shade on the Boat Beach for about an hour to wait for the shadows on the Canyon walls and started my climb out about 3:15. Other than the first mile or so, I was climbing in shadows nearly the entire way up. I felt great on the climb and hit the rim just before sunset. After dodging cars for 10 miles I turned onto forest roads where I was crewed by my husband Parker and fellow trail runner Kim Swearigen. I kept a pretty even pace through the night, and--other than nausea that dogged me from about 20 miles onward, things pretty much went as planned. I usually fuel mostly with gels, but I had a hard time getting them down this time, so I fueled mostly with juice, apple cider, soda and some instant mashed potatoes.

Despite a forecast for snow and potential thunderstorms that had me worried about the summit, the weather on Humphreys was perfect--cool, cloudy and with light winds. I tagged the summit sign at 21:00:07. My husband met me a few minutes later for the long, slow slog back to Snow Bowl.

Big thanks to Meghan Slavin and James Bonnett (previous FKT holder for H2H) for their help planning my adventure ... this is a tough route, with significant logistical challenges--their help was key!