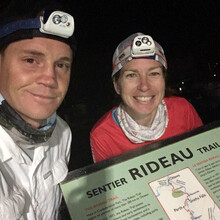 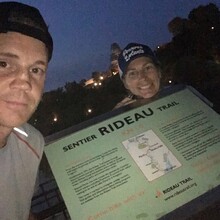 This FKT was only first even thought of a couple weeks prior. We quickly printed out maps, booked a hotel, and figured out all of the logistics and next thing you know, it was go time. The day prior was travelling and staging the vehicles. We left one vehicle in Ottawa and one in Kingston. We started at 3am in Kingston and got off to a good start with perfect weather. We soon realized that finding the route may be difficult at times. We didn't have a gpx file so we relied solely on good, old fashioned maps. It's a lost art. We did our best to follow the blazes early on. We also had notes on the maps regarding reroutes, distances, resupply options etc. We had no caches for this one. We totally relied on going through towns to resupply. We knew we would hit Sydenham on Day 1 and Westport on Day 2. We went through Sydenham and there was a Foodland pretty much right on the trail. We had a nice break and filled our packs with snacks. We ended Day 1 and found a discrete spot to set up our camp for the night. Day 1 ended up being a great mileage day. Maybe too great.

Day 2 began after getting about 4 hours of sleep. Day 2 seemed to be a slow day for us. We kept pushing on and made it to Westport. We had to restock but we also realized the gas station was about a km off trail. We ended up asking a nice lady for a ride and she agreed. She even waited and gave us a ride back. We told her she was a trail angel and she thought that was pretty cool. It's amazing when things like this happen and it's usually very memorable. We soon realized that our goal of making it to Perth on Day 2 was not going to happen. One more night camping and no shower won't kill us. We adjusted our goal to make it to Smith Falls on the end of Day 3. We found another spot to camp and slept much better this night.

After a sluggish Day 2, we knew Day 3 would have to be better to make it to Smith Falls. We really wanted to order vegan pizza, shower, and sleep in an actual bed. This was our carrot. We did have to stop in Perth to resupply. Luckily, we didn't have to go too far off trail. We went to a Circle K and even found a french fry stand, which we took full advantage of. Perth was a happening place on a Friday. The trail went through a park where there was live music. It's always fun entering a new town that you've never been to. And there's no better way to experience the town than on foot. Smith Falls was next, but we had a way to go still. We ended up making it and we called and booked a hotel room for the night. We also took advantage of the comfy bed to sleep a little longer. What a treat it was.

We felt totally refreshed and ready to go. We also had to stock up before we left town. The trail was starting to get a little easier with more straight sections and ATV trails. And for late September, we couldn't have asked for much better weather. It was actually pretty hot during the day and the nights were beautiful. We knew we would go through 2 towns on Day 4.  Merrickville and Burritts Rapids. These were not resupply towns for us since we didn't know they would have much. We lucked out in Merrickville though and found another fry stand right on the trail. Some fry's and pop did the trick. We hit a trail section and found a good spot to camp again. It was so nice, we even cowboy camped.

Sunday was just about making it to the end ASAP. We knew there was a ton of paved, rail trail near the end. A lot of the trail was flat and straight along with road sections as well. Perfect for a last day trying to make up some time. The day ended up being pretty hot. That along with us moving faster made us go a bit off trail to a gas station near the end. We really needed fluids though. We actually hadn't hit any good water sources on the latter part of the trail. Luckily, we stocked up in the towns and places that we could. The funny part about the end of the trail, was that we couldn't find it. We probably spend 20 minutes running around, asking people where it is etc. For whatever reason, it was a tad earlier than we thought and we just blew right by it. Not the ideal way to finish, but it's all good. We took our picture at the finishing plaque and we were happy to be done. It was an amazing adventure and a great last multi day of the season.

- The trail was much longer than advertised. We finished with 355km, instead of the 323km they have on the map. (We did have a few wrong turns, and resupplied off the trail, but definitely not 32km worth).

- The trail is pretty well marked, but navigating in the dark is difficult. You really have to pay attention the entire time.

- September is a perfect time for this trail. It was not wet, and for the most part, not overgrown.

- 90% of the lakes on the maps were actually swamps. Resupplying water was tricky and pre-planning is crucial.

Overall, a great trail to do together. What better way to spend quality time together, than running/hiking 74km/day in our beautiful province. <3