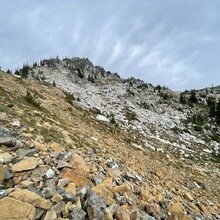 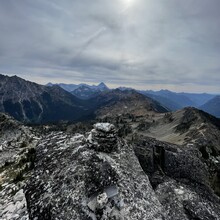 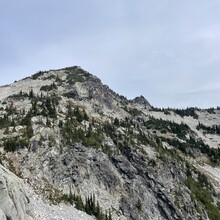 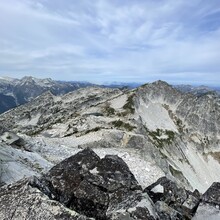 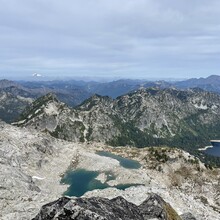 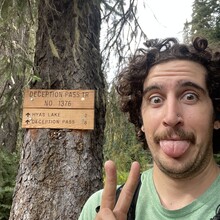 The route begins at the Paddy Go Easy TH, and from there it winds up the trail to the Paddy Go Easy Pass. The initial 3-ish miles is on solid trails, with a few blowdowns that were easily navigable. About 2/3 of the way up you clear tree-line and the beauty of the Teenaway area really starts to take effect.

At the pass I took a left and headed up to the first summit, and first bit of off trail section, Paddy Go North. The scramble follows a deer path for part of the way up until the initial scree field, which you continue to traverse for a bit, before heading up an obvious gully to the peak.

The descent was quick, and once again I was off rock hopping and trying to stay off of the delicate plant life as much as possible (ESPECIALLY IMPORTANT IN THESE ALPINE AREAS WHEN YOU'RE OFF TRAIL). The travel to Sherpani was straightforward, and I weaved my way through a series of boulder fields until I was at the transition between two rock types, as shown in photo 1. I am no geologist, but it was clear to me that I was on to the base of the next peak, Sherpani. The route finding was slightly more involved than Paddy Go North, but as I followed the scree fields up, an obvious gully became clear on the east side of Sherpani. The top-out is apparently described as a Class 5 move. But there is an incredibly straightforward and non technical top-out on the west side of the coffin (the tippy top point of Sherpani). This is where I took photos 2 and 3 (one of the log box and the other looking out at the next section of the traverse).

The descent from Sherpani followed the ascent back to the scree field, where I followed the base of a cliff band around to the West rib of the ridgeline that connected Sherpani to the rest of the traverse. I made sure to get across and down the roughly 200 feet and not mess around with trying to attack the ridge straight on, as apparently it cliffs out pretty quickly. This proved to be a smart move, and other than the pain of navigating wet heather and pine branches, I followed a series of deer paths until I was able to wrap around onto the ridge right before Granite South. This had a beautiful view down into French Potholes, which I hear has some solid alpine fishing!

I followed this ridge for roughly a mile, before I had to shoot the gap between the top of the ridge and the gulley below, rock hopping up a scree field towards Granite South. Once on top of Granite South, which was probably the least intense scrambling of the peaks, I was able to see a clear path to Granite, as shown in picture 4. I descended off the peak and followed the ridge as closely as I could, trying to dodge as much bush whacking as possible, while also not getting sucked down fields of loose rock.

The transition onto Granite peak has one move that was a little mind-bending, and required putting my faith in a very large boulder-bridge that seemed to have stuck itself between the ridge and the peak. Once over this there was an apparent foot path from all the traffic that the lakes below, both Robin lakes. I gathered steam and made my final push up to the peak.

The descent from here was easy enough, following the foot path down to the lakes, and with GPS in hand I was able to navigate my way out of the myriad of paths surrounding the two lakes, created by all the backpacker/hiker activity. I filled up water at one of the exit streams, and started my descent to Tuck Lake. Personally, I found this the most challenging part of the journey as it was still a fair amount of steep hands and feet descending until I got to Tuck Lake. Once there, I struggled to find the clear trail out, and had to do a bit of scrambling/bush whacking to get back on trail. However, once I did it was smooth sailing, and I was able to cruise my way back to Cathedral Pass TH, final picture.

All in all I only drank about 2.5L of water, stopping at the edge of the lower Robin Lake to resupply, and ate 6 bars/gu's (think 250 calories roughly each) which I carried in and out. This was a really awesome cross-country travel experience, and I really appreciate all the effort that got put in to posting this in the first place, and to those who have attempted it before. I want to emphasize how important it is to respect these places we get to recreate it, and especially when you're going off trail to think about how you move, in an attempt to minimize your impact on the wildlife (both flora and fauna).