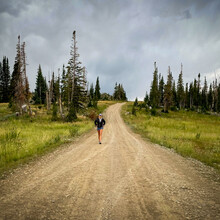 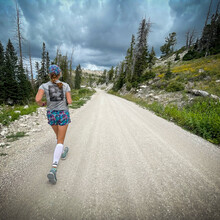 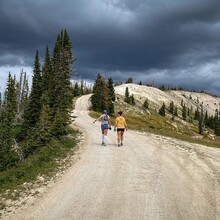 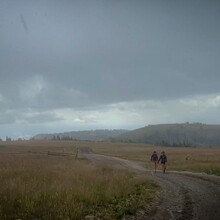 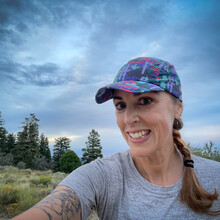 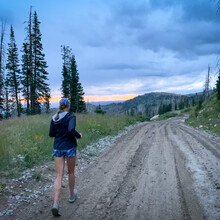 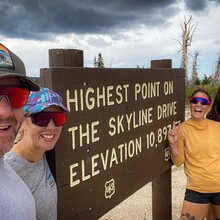 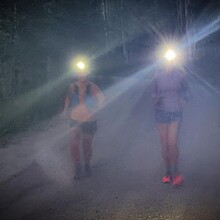 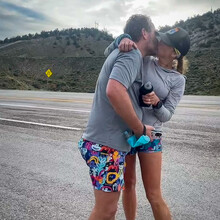 What. A. Day. Matt likes to say that running 100 miles is like living a lifetime in a day. ups, down, curves, intense joy and unbearable pain. Completing the 110 mile route from I-70 to Hwy 6, the Skyline Drive Scenic Backway, definitely felt like a lifetime.

A month ago, after posting that I was going to go for the first female, and overall FKT for this route, I pulled my soleus, leaving me unable to run. Two weeks later I got Covid and the thought of running seemed impossible.

But I was determined, so after a forced 3 week taper and a week with a couple SLOW, short runs, I decided I was going for it anyway.

My confidence was low but i had people in my life who believed in me. And if it weren’t for them, this wouldn’t have been possible.

I slapped a smile on my face and started to run!  Matt saw me off at 5:10 as I began running up Salina Creek Rd. I felt good and the climb was gradual but I knew it climbed for almost 50k so I took it easy.

Around 10 miles I saw my crew for the first time. They cheered me on and I told them to go ahead to where the great western trail hits skyline drive (~11 miles in). From there I filled up my water and gels and and kept moving forward. Larissa ran with me for a couple miles and Matt did as well.  As soon as the road created a hill I took off on my own. I would see my crew several miles up again. I ate some, refilled, and met them at the 12 mile flat campground, where I would eat my real first food and sit for the first time. Some side by sides passed, and I took off again.

This time Katie joined me for the final climb to keep my spirits up. Several miles later we hit the high point in the route at ~10900 ft. We took a pic as a crew and I continued on. Not long after a storm rolled in. Hard hail began to  fall, leaving welts. The crew was not far ahead and I asked them to stop so I could grab my jacket and continue forward. As soon as the lighting began to boom I began to get nervous. The route follows the natural ridge of the range, well above 10500 ft. No low spots, trees, or shelter in sight so I ran. Somehow the pain in my legs wasn’t noticeable  and I was able to move quickly as the lightning got further away. I caught the crew again and stood under the hood while I refilled headwind, water, and gels. Katie began stuffing chips into my mouth, insisting I needed to eat. I didn’t want to get too cold so I took off again. I told the crew of three to go several miles ahead. For a moment the sun came out but it quickly faded and a harsh headwind came my way just as I was taking the climb through horseshoe flat.

The winds wouldn’t stop. I hit mike 50 at 11 hours and 59 min. I knew it would be tough to even split and get the sun 25 I was hoping for the first 100 miles of the route. The rain started up again in force. First just a sprinkle but soon it was hitting me from every side. Matt jumped in with me At 100k, just as it began to get dark. The tacky ground was nice at first but quickly became muddy, slippery, and treacherous. Our crew car was an all wheel drive mini van and though we had driven the route several weeks earlier, the weather co dictions would prove tricky. Each muddy climb, I’d watch the van fishtail and I just kept marching.

The rain slowed me down. The ground was so slippery and I thought there was no way I’d be able to stay on pace. The previous FKT and first male to finish the route had done it in 27 hours, 13 minutes. I kept doing the math in my head and it seemed it would likely be impossible. But only two people had completed the route and no woman and I was determined to be the first!

Several hills I could barely walk up and it’s a miracle I didn’t take any bad spills. If the crew car was caught (a real possibility) I would have to stop my effort due to safety and the lack of accessibility to water.

Just past midnight the rain finally slowed. I hit mile 75 right before, as the route hit a paved road I would have to run for 5 miles. I walk ran the rolling road and hit the campground and Katie and Matt switched out for pacing and I sat for the first time in 30 miles, changed my socks and shoes, and took off. Suddenly we saw a sign “Highway 6 28 miles.” I couldn’t believe I had made it through such horrific conditions.

That spot was the lowest I had been on in over 55 miles at around 8800ft. It slowly climbed back up. Katie kept me running, walking, running, the whole climb. With weather as bad as it had been, I didn’t stop for hours. I’d reach my crew, throw them my water bottle, grab something hot, and keep moving. I knew if I stopped the chill would set in and I’d be screwed. More ups and downs, gradual enough to run but my energy was low. Luckily for me, I’m a fast walker and was able to walk many of the climbs at a faster pace than many can run.

We descended down towards fish creek trailhead and maybe a mile further we heard the dogs. The route is known for being a popular place to Shepard sheep and sheep dogs are left to watch them. 4 dogs were very aggressively barking and began to charge. Katie put out her hand and commanded them to stop. The boarder collie leading the pack submitted and we rushed pass. That was hands down the most terrifying moment in the trail.

I was around 95 miles when I hit the 24 hour mark. I just kept moving, slowly running as much as I could. A slight glow began to appear on the horizon. The thick clouds blanketed the sky the whole night and I hadn’t seen any starts. The light blue and pink in the horizon meant the sun would be up soon!

The final decent began at mile 99 and I knew I needed to run to finish before 8 am. I hit 100 miles at 25 hours and 7 min. It was a shock I was able to move through the night, without stopping, just fast enough to still have a chance of beating the record.

I believed I could do the last 8 miles in less than an hour and a half. Larissa ran the next three miles with me. I’d walk for 30 seconds and then begin again. With 4 miles to go, Matt jumped back out by my side and we didn’t stop running until I hit the cattle guard at the end of the road and hit hwy 6. I put my hands on my knees and began to sob.

I had done it. I finished the route in 26 hours 36 minutes and 48 seconds, 41 minutes faster than the previous record and the first woman to ever complete the route. My watch recorded 108.3 miles. I know the other two finishers were closer to 110 and 112 miles respectively.

I ran on Huma Gels, Spring Awesome sauce, and Tailwind. I was able to consistently consume calories and had some solid foods. My stomach was a champ. I probably consumed nearly 45 gels and drank 100 oz of tailwind. I had several quesadillas, ruffles, and hot chicken soup and ramen. I had two cups of coffee, some coke, and ginger ale.

There is no way this would have been possible without the support and love of my husband Matt and my two friends Katie Brown, and Larissa Edminster. They rallied through some really rough stuff and their company through the night and up several hills was essential to my success.