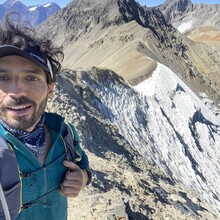 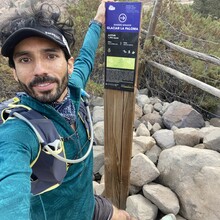 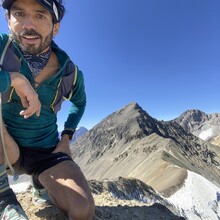 I had been observing the summit and glacier La Paloma from the city of Santiago for a long time, so I began to investigate its history, importance and I wanted to get closer to learn about the threats that this mountain faces, its glaciers and the valley in which it is located, since it is located a few kilometers from two large open pit mines.

It is a mountain of 4,910 meters high that usually requires 3 days for its ascent and descent, but I felt that I could ascend and descend it in one day, so in the research I found that the French Romain Mounton had also had this crazy idea and had managed to establish the FKT in 12 hours and 58 minutes. This fact motivated me even more and I wanted to break that record.

My idea was to do the FKT in the style I like the most, alone, self-sufficient, without external support and without advanced camps. But my biggest concern was the cold since I would be running and summer had already ended almost a month ago and with autumn in its first weeks, the cold was being felt in the high mountains. Plus the weather forecast didn't look favorable, but I had a good feeling.

For many years I have done my training with little water and little food, so that on the day of the climb I don't feel so thirsty or hungry.
I prepared my backpack with just what I needed because I wanted to go light, crampons, cold jacket, gloves, gaiters, a camelback with only 2 liters of water, 4 energy bars and 6 glucose gels. And that was all I consumed on the day, without getting water from any stream.

I started running after 6 am so as to be approximately at 10 am at the beginning of the El Rincón glacier, with the sun shining to avoid the cold, and so it was, everything went as I had planned. The weather forecast had failed in my favor, a warm breeze and clear skies accompanied me throughout the day, which allowed me to enjoy the summit for about 15 minutes without even having to wear a warm jacket. The view was beautiful, many glaciers to protect but at the same time horrified by the size of the mining companies that are a few kilometers away and that threaten the preservation of these glaciers. I took the summit photo and started the descent.
The descent was the most difficult part of the day because the El Rincón glacier was mostly covered by loose rocks so that every step I took, an avalanche of rocks was coming down on my legs. In this section is where I spent the most time, since I had to stop, wait for the boulders to pass, think and continue. The gaiters were destroyed in this section and is where I had more stress, but I came out unscathed. Once I got through this section I started to run faster to break the record, and I did it, reaching the start totem pole in a total of 10 hours 34 minutes 32 seconds.