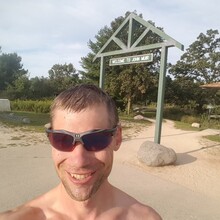 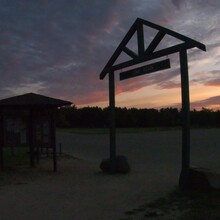 Course note: If going counterclockwise from the parking lot (hiker direction), a little over 0.5 miles in there is an unmarked intersection. The blue loop on the DNR map goes left. The trail markings on the Strava map look like they take the right/straight path. Since this route is the blue loop, I believe using the DNR map blue loop is correct. The other way is a little shorter. All other intersections are pretty clearly marked, with the exception of the Gnome Loop maybe being a little confusing. There is kind of four legs of the blue loop converging in one spot there. The FKT route includes all of them.

Got out early to mostly beat the mountain bikers. Used the hiker CCW direction. It was a nice morning to be out. Debated whether to carry water, and decided against it.