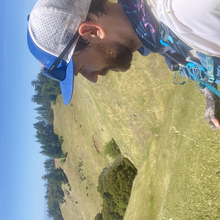 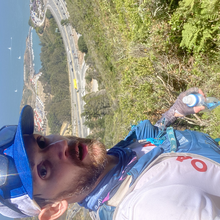 I've had my eye on running this route for a few years, but hadn't gotten around to it largely because I was either too close to a race or (for all of 2021) injured. This is an absolutely stellar route with so many different special moments to choose from, and I've wanted to elevate it in a manner that more folks would know about it and undertake it.

The route itself has a history preceding its inclusion on fastestknowntime.com. Jake (former unsupported record holder) recalls running it with Bay Trail Runners as early as 2013, I suspect the Bay Trail Runners were probably running it for as much as a decade before that. I've found dozens of route completions from 2013->2015. None of the times I've found from those runs would have bested the current marks, but it's worth noting that this history is there and under-researched.

A good friend of mine (Liam Lonsdale) also has completed this route several years prior to its inclusion here, solo and unsupported in a time just a bit over 5 hours, which would have been the FKT for some time (and which I think he should still submit as he has the requisite evidence).

For the attempt, I chose to descend Cardiac using the Dipsea Trail (vs Deer Park fire-road). The Bay Trail Runners historically used Dipsea for this course, and the original track submitted here does as well (The Bay Area Ridge Trail officially follows the fire-road). Some of the more recent FKT attempts have used the fire-road. I don't know that taking the fire-road should be considered disqualifying by any means, but it's probably worth giving it a shout-out in the description so that folks know to do so.

I would expect that my time here could be improved on substantially, especially with a supported effort. Comparing to similarly highly-runnable 50Ks, I could believe that this route eventually runs as fast as 3hrs 15min. Hopefully my Strava activity will catch a few eyes and direct them towards the attempt.

For the attempt, I parked my car at the parking lot at the bridge and received a ride from my friend Shawn and his wife Megan to the Bolinas Ridge Trailhead off of Sir Francis Drake. I brought two soft-flasks in a vest, my Garmin In-Reach (transmitting for safety), ID/Credit Card/Car Keys, and a 1L Filter Bottle fully filled as an emergency water supply.

In one of the Soft Flasks I put Maurten, in the other 520 Calories of Roctane Summit Tea. I had an extra Maurten pouch in my bag for when I refilled the bottles (there is water at both Pantoll and shortly after at Cardiac, no other serviceable water on the course. A few stream crossings, only one (Redwood Creek) had enough to fill up or dunk if desired.)

I decided to "live stream" as much of the effort as I could, and posted video update stories to my instagram every few miles throughout. I'll eventually turn these into a video and stick them on Youtube/Instagram as a more permanent post. Network reception was generally good enough that this worked, though a few stories got clipped.

Since I knew the day was going to get hot, and that all the shade is in the first half, I decided to push the first-half a bit extra to take advantage of the cooler portion of the day and the shade. This worked out well, but it will still baking by the time I reached Pantoll for water. I used the fountain at Pantoll to dunk myself and refill all three bottles, this took about 5min, I wish I'd skipped it and just refilled at Cardiac.

I stopped at Cardiac again to dunk, refill one bottle and put the Maurten mix in it. The fountain at Cardiac has a flow-rate that can fill a 1L bottle in 1-2seconds, vs the 30-45s it was taking at Pantoll.

I thought I was off-record pace for most of the second half, and pushed slightly harder when I could because of that. It turned out to just be measurement errors. The back half, exposed, was miserable until I got up to the ridges again. The headlands had a breeze which made anywhere the air wasn't still pretty nice. Marincello climb was particularly hot and hard, no breeze. But after that temps started to drop as I approached the bridge and the breeze picked back up.

I wore the Salomon Pulsars for this. I've been wondering if they were a good shoe for longer efforts or not cushioned enough. Verdict is not cushioned enough, my feet were killing me by the end even though the snug lock-in fit and stability meant they were otherwise in extremely good shape for the day.

All-in-all an amazing day in the headlands and cannot recommend this route enough.