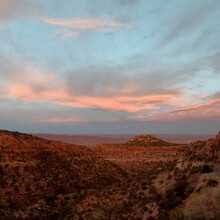 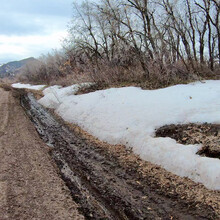 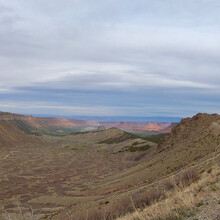 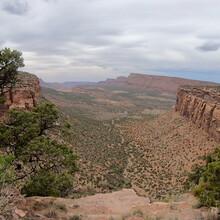 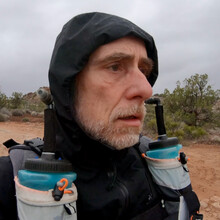 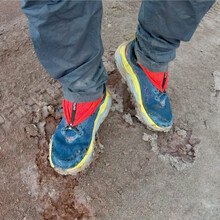 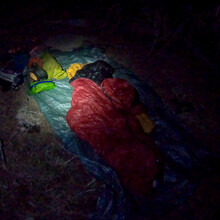 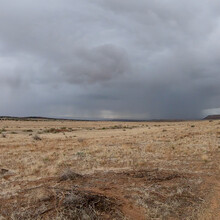 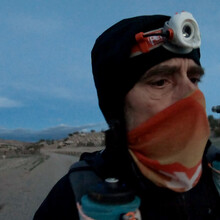 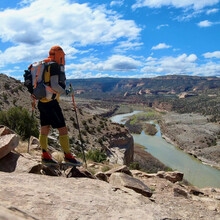 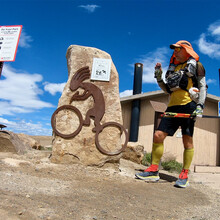 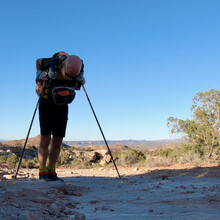 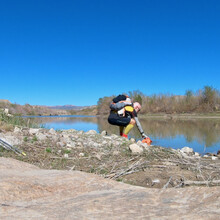 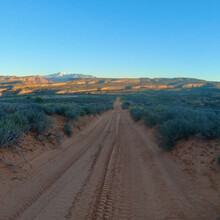 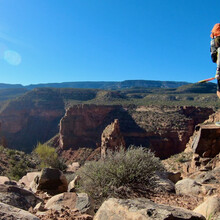 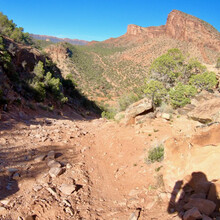 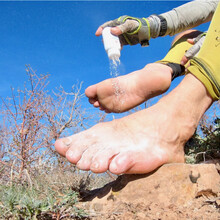 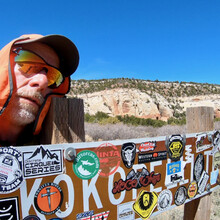 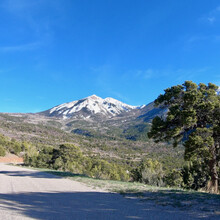 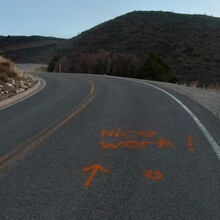 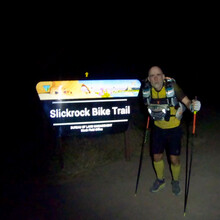 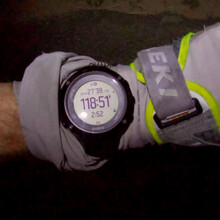 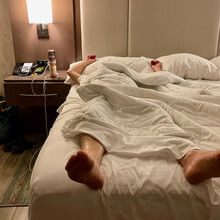 The upcoming movie will also be posted on the blog and on my YouTube channel at https://www.youtube.com/c/ChristofTeuscher.

My first out & back attempt six weeks before the second attempt did not go well. See the announcement, report, and the movie. Yet, as always, the failure was also an important learning experience, which allowed me to better prepare for the second attempt.

At 4am I was ready at the Slickrock parking/trailhead in the Sand Flats Recreation Area just outside of Moab to head into the unknown for the next 4-6 days. It was dark and windy. The weather forecast predicted strong winds all day. They were right. My pack had calories for the next 45 miles, water for the next 22 miles, sleeping gear, layers, and whatever else I anticipated needing on the next 284 miles. Saying that I was ready would be an overstatement.

I slowly made my way up the Sand Flats road. There was still some snow lingering on the last 3 miles before I reached the La Sal Mt. Loop road. From there it was a ~6 mile descent to the Castle Valley road, then a 5 mile road climb up to the Fisher Mesa trailhead and overlook. On my last attempt, there was about 2 feet of fresh snow up there.

From there it’s basically a long descent (with a few smaller climbs) to Dewey Bridge. The wind was relentless and I figured I could only get some rest deep down in one of the canyons. I ended up finding a decent spot in the Cottonwood Canyon.

I spread out my tarp and sleeping bag and fell asleep immediately. Just past midnight I woke up to rain. Oh crap, that’s not what the forecast said. In a hurry I set up a shelter with the tarp and went back to sleep.

I was on the “road” again by 3am, after having eaten some granola in “bed.” Very cozy and romantic. I made my way down to Dewey Bridge and started the grind up on the other side. It became clear that the rain was real and could not be ignored. From then on, it was “rain-gain-gear-on-rain-gear-off” all day. Naturally, I was most worried about the potential mud, which I had experienced extensively during my very first unsupported attempt in 2019.

Things only started to get really bad between Cisco and Westwater. It became almost impossible to move. The mud is incredibly sticky and slippery. After long and exhaustive hours through the weather and the mud, I made it to the Westwater road/turnoff. There I met two mountain bikers who just came back from Westwater to rinse off their bikes from the mud. They were not excited to hear that the road to Cisco was pretty much unrideable because of the mud. I did not go to the Westwater Ranger station because I had planned on carrying enough water.

I did the 3 mile road section on the Westwater/Harvey Dome road and worked my way up the Utah Rim, where the sun started to peak out again. There was less mud and the moving became easier. I got chased by an evil dog at the exact same spot where I got bitten the last time. The owner jelled that I’d be fine. I said ” I heard that before!”

I spent a bitter cold night around freezing temperatures past Bitter Creek, on the way up to the Western Rim. I had made it roughly to the 110 mile mark.

After a bitter cold night, I was glad I could move and warm up. Crossing Rabbit Valley was as painful and annoying as always. Salt Creek was flowing high and the water looked disgusting. I was glad I didn’t have to fill up there. The next 12 miles on the single track trails to Loma were slow and painful. I met an unusual amount of mountain bikers, many with (unleashed) dogs.

The mid-day heat was getting rather intense and I struggled to move fast. It was past 5pm when I made it back to Salt Creek. I still managed to cross the Rabbit Valley before night fell. I found a mediocre spot for the night 1 mile or so from the the top of the Western Rim. The night was rather restless. I woke up once because a passenger car came dashing down that 4×4 road, which really is not made for low clearance passenger cars. They had perhaps missed the turnoff to the Knowles Canyon campground and kept going until they couldn’t anymore?

The night was clear and reasonably warm. I was on the move by 3am, crossed the Utah Rim, checked off the endless Westwater/Harvey Dome road, and headed toward Cisco. The temperature started to become rather unbearable on that endless stretch to Cisco. This was the first time I had no wind whatsoever on that stretch. Thankfully I did not have to save water. Whenever I saw a rain puddle, I tried to cool myself down.

When the temperatures started to cool down a bit I reached the Colorado, cooled down there, crossed the McGraw Bottom, Highway 128, and then started the climb up. It was still daylight when I reached the Yellow Jacket Canyon that eventually led back down to Dewey Bridge.

It was dark when I reached Dewey Bridge, but many ATVs and jeeps were still wrapping up their day on the trails. The place was buzzing and I was eager to move on, yet, I also felt very exhausted. I found a spot for the night not too far from the bridge and decided to call it a day.

Now the real work started: most of the elevation gain/loss of the trail is in the section between Dewey Bridge and Moab. Thankfully I already knew well what I was getting into. I got up at 3m and started the endless climb up to the first mesa.

The descent on the other side is always very spectacular. For years I wished I’d see some jeeps climb the famous Rose Garden Hill. This time my wish was granted! Three highly modified jeeps and a Razr started climbing the hill a few minutes after I had passed it on the descent. It was rather mind-blowing how easily they made it up that incredibly steep and rocky slope.

Once I reached Fisher Valley, I still had about 45 miles to go. That seemed rather impossible. I tried to focus in the views, the flowers, and the gorgeous scenery. The endless climb back up to the Fisher Mesa trailhead/viewpoint took many hours. I was hoping I would make it before sunset, and I did.

Once I reached the highpoint at the Cold Springs/Mason campground, I still had over 15 miles to go. It’s when you think you are almost done because you can already see the lights of Moab. Yet, after some basic math, you realize that this will take you still at least 5 hours. Great. I wasn’t going to quit now, although I really wanted to.

I stuffed down some calories and started the descent. The first 3 miles were terribly slow and painful. Things started to improve a bit afterwards, but I struggled with sleep deprivation, many other physical discomforts. I knew this finish would be hard, but I had forgotten how hard and how endless this was going to be.

I figured I could still make it under 5 days, which was somewhat a motivating factor to keep moving, otherwise I might have stopped for a more significant amount of sleep. At 2:52am I finally reached the Slickrock parking/trailhead, where wifey was already waiting in the jeep. I though I would never finish this, but as always, things eventually end.

Thankfully I will never have to do this route again! Or did I say that before?

I had four resupply caches with calories placed along the route as well as two water drops. I had no support from anything or anybody. I was also solo for the entire duration of the adventure. This satisfies the self-supported FKT guidelines. The food and water caches were all retrieved right after the completion of the route. All trash was recycled.