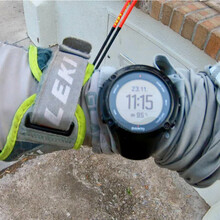 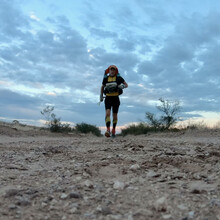 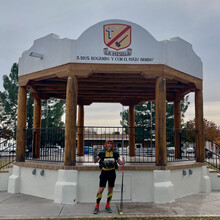 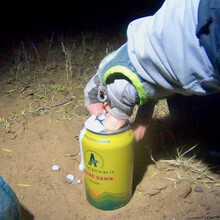 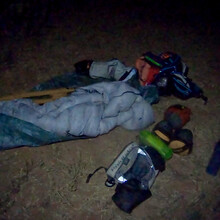 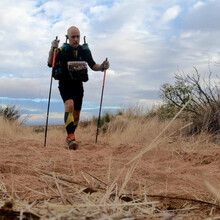 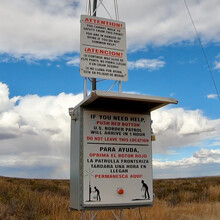 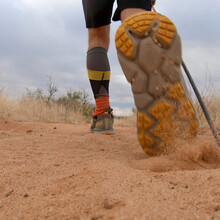 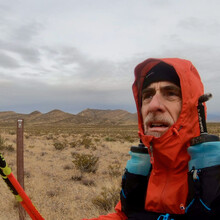 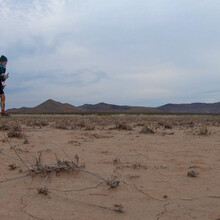 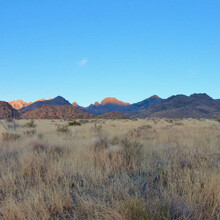 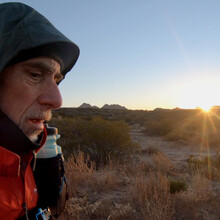 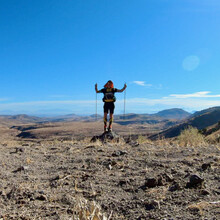 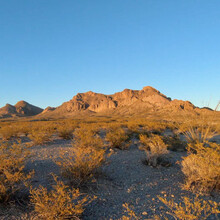 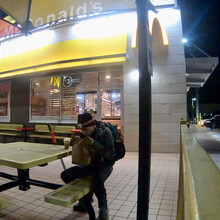 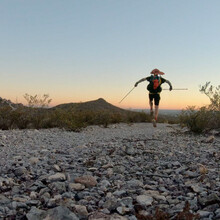 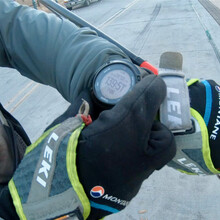 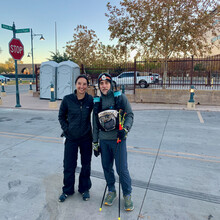 At 11am on Tue, Nov 23, 2021, I was on my way at the Mesilla Plaza. The first 30mi or so were going to be a terrible pavement and dirt road walk. I had mentally prepared for that. Or so I thought.

Because the natural water resources as well as the cow troughs on the route are highly unreliable, I had made water drops in 10 strategy locations along the route. The longest stretch without reliable water access between my water drops was about 43mi long.

Soon it felt like I had left the city of Las Cruces. That was fine by me. I was ready for some solitude. I tried to run some sections, but the pack was obviously heavy and running was hard.

Night started to fall, clouds moved in, and the wind picked up. As a treat, I had carried a (non-alcoholic) bed beer. It was greatly appreciated. After less than an hour of sleep it started to rain and I had to re-organize my bed and build a shelter. It was a short and unpleasant night. This is also the spot where I punctured my inflatable mattress. Amateur! From now on, I had to sleep on the ground in freezing temperatures.

The new day greeted me with a lot of soft ground. The moving was slow and required a lot of effort. Somewhere around here I also punctured my thigh with a rusty barb wire. Not until I finished did I actually think about tetanus.

After another endless day and night on endless roads, in bitter cold rain and wind, I finally reached Westway in Texas. It was Thanksgiving Day and my only resupply option was a 24h gas station. They were very kind and let me sit at their tables and organize my stuff out of the wind and rain at 3am in the morning. I did what I needed to do quickly and was on my way again. The weather had definitely turned sour and it was raining on and off. However, the forecast said it would improve. It eventually did, but it took pretty much all day.

As I reached the outskirts of Las Cruces, it was late, everything was wet, and I was sure I was not going to be able to traverse the city before I needed a sleeping spot. I told myself that if I wouldn’t find a hotel on the way across the city, I would quit. Finally, after crossing the beautiful and completely deserted campus of New Mexico’s State University, I spotted a Ramada Inn. It felt slightly wrong, but I couldn’t say no, and I’m glad I didn’t. In true tru-hiker fashion (and in accordance with self-supported FKT rules), I decided to get a room for a few hours of sleep and to dry my gear. But alas, it took the front desk team almost 30min to check me in because of some weird computer problem. After the 3rd computer reboot, I got slightly impatient.

Before 3am I was on my way again and reached the Mesilla Plaza at 3:30am. 64h15min to reach the halfway point (150mi). I felt strangely revitalized and pressed on through the deserted city and along the dried-up Rio Grande.

There was more flat, more sand, more roads, more desert. More of the same. Then there was yet another night were I thought it would be dry (according to the forecast), and then it started raining less than an hour after I fell asleep. By then I was used to getting up and to setting up shelter. Why not set up a shelter from the beginning, you are asking? Because that is also a pain.

I reached Hatch mentally and physically completely drained and sat at the store’s entrance for a while. The Christmas carols they were playing outside were beyond terrible and I got irritated. I finally got my act together, pulled out my shopping list, and did what I needed to do. The only thing I was craving was something to drink and an ice cream. I threw up both a mile outside of Hatch. That was that.

On I went into yet another dark night, along endless pecan tree farms, cotton and chili fields, and barking dogs. After sleeping under a pecan tree (trespassing, I’m sure) and many more hours of wandering through random hills with rocks and cacti, I heard and saw I-10. To reach the I-10 rest stop, which is an “official” Monumental Loop water stop, I had to climb two fences. Because the night was bitter cold, I spent a long time warming up with the rest area’s hand dryer. Thankfully nobody else wanted to use it at 2am. I turned it on again.

A few miles after the rest area, and after spotting several trail cameras, one of the many border patrol trucks that had passed me suddenly stopped and the agent asked whether I had climbed a fence at the rest area. I said yes, and that I got water there. I left out the hand dryer details. I glanced into his truck and saw a screen that showed a thermal image of the surroundings. Fancy! They must have sensors and cameras everywhere. Later, I heard a drone flying above me. There really is no hiding.

I made it to the MacDonalds at the I-70 crossing with about an hour of reserve before it closed. Ughs. That was my last and crucial resupply point. Had I missed it, I would have had to quit. I ordered 4 cheeseburgers at the drive-thru and a milkshake. I really didn’t want to sleep again, but a mile or so past the MacDonalds, I had to lay down for an hour in a dirt lot under a power line. It was highly romantic. Also brutally cold without an inflatable mattress.

After MANY more endless and frustrating hours on motorcycle trails, dirty roads, and other nondescript roads, I finally reached Las Cruces. Again. The slog through the city toward the finish line seemed endless and I was in great discomfort.

After 139h and 51min, I was finally done. It was about time. I had to pee and was getting hungry because I was out of food. Should have ordered a few more cheeseburgers. Pete (the current male supported FKT holder) and wifey were both at the finish line. I was initially hoping I wouldn’t have to witness another sunrise before the finish, but I was forced to. It was fine. We chatted for a while and before I froze to death, Ursina drove me to our hotel were I showered and passed out for several hours.

Once we got home, I checked my vaccination records. It was 19 years since I’ve had my last tetanus shot. One is supposed to get a booster shot every 10 years. Ughs! Plus, if you get exposed, you have to get one within 48h, not within 6 days. I managed to schedule one for the next day, together with my COVID booster shot, but it would not help to prevent an actual tetanus infection, had I been exposed at the beginning of my trip. Well, that wasn’t smart of me. Perhaps I should keep up with my shots the next time.

Thankfully, so far I had no signs of infection or any tetanus symptoms, but it can take up to 21 days for them to appear. Fingers crossed…

A big thanks to Ella and Pete for sharing trail intel, to Garth and Ella for their most useful reports, and to Pete for coming out to the finish line!