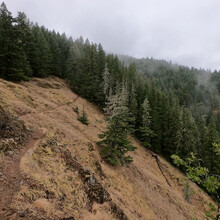 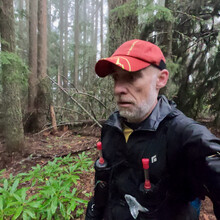 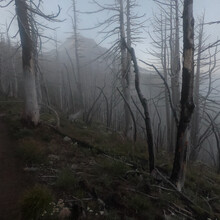 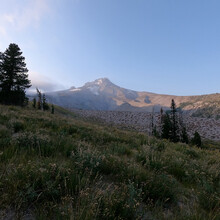 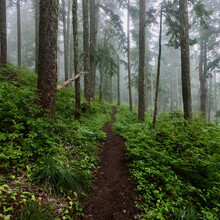 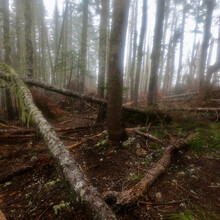 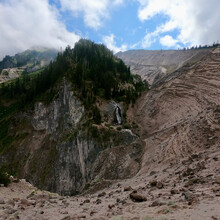 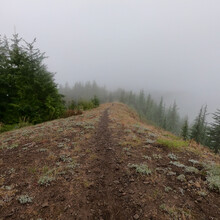 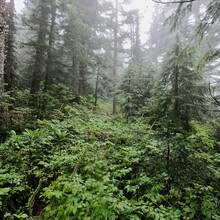 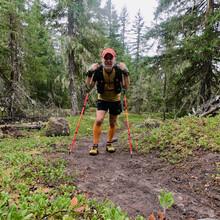 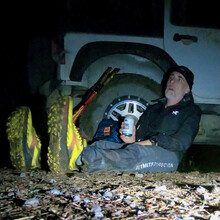 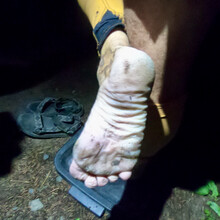 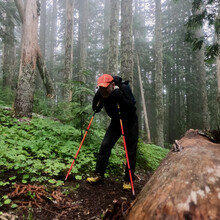 It started to drizzle as soon as I left the house. Being tired of the hot and dry summer, I was quite excited by the prospect of cooler conditions. The weather forecast said by 6am it would be dry, then sunny for the rest of the weekend. None of that was going to happen.

At 4:30am I was finally ready at the Zigzag Mtn. Trailhead. It was still drizzling. I had food for up to 48h. Because of the positive weather outlook, I decided to leave a few extra layers at the car. I was soon going to regret that decision.

I started the grind up to the Hunchback ridge. With about 5lbs of food, the pack felt heavy. I soon encountered some significant downfall on the ridge as well as wet vegetation on the overgrown trail. When I finally decided to put on my rain pants and jacket, I was already socking wet. It’s not clear why I always wait too long.

Once I made it down to the Salmon River, I made myself a waffle and mayo breakfast, an instant mood-upper.

The drizzle continued on the Salmon River trail and constant carwashing made me question my life choices. I came up with a sock plan for my only spare socks: once I would make it to the well-maintained PCT, I would change into dry socks to prevent debilitating maceration. I would then attempt to dry my wet socks on the pack in the sun.

It was indeed sunny when I reached the PCT. But alas, my socks never quite managed to dry out. Neither did I nor the rest of my gear.

The sky indeed started to clear more and more as the day progressed. When I finally made it up to the Timberline trail, I could see Mt. Hood for the first time. It was getting cold and windy and my clothes were still wet. My only extra layer was a down jacket. I started to deeply regret my last-minute decision to unpack a few extra layers at the car.

Wet and cold, I figured the best way to stay warm was to move quickly. But alas, my stomach didn’t comply. Once it was dark, I decided to try a 15min trail nap. That has sometimes been sufficient in the past to fix my stomach. Not this time. Nothing stayed in. After a few more hours, I was ready for a longer trail nap attempt: I bundled up in my down jacket and the poncho and gave myself a whopping 45min. That did the job. I woke up hungry and ate immediately.

The journey continued throughout the night. The moon was so bright that I was able to move without a headlamp in non-forested sections.

At the White River crossing I chatted with two Timberline hikers and inquired about the river crossings. They said they got wet at the Elliot crossing above their knees and that they had met some folks who got wet to their chests. That sounded rather unbelievable for late summer conditions.

It was past 2am when I made it to the Elliot crossing. I didn’t have to search long to find a few rocks that allowed me to hop over without getting wet. Someone had put up a rope across the river, but in what looked like a terrible spot to cross.

I crossed all rivers without getting wet.

By the time I reached the PCT, it was drizzly again. I never really saw Mt. Hood again. The fog was hanging very low for most of the day and there was an unpleasantly cold wind.

In Paradise Park, I got attacked by a first dog. Thankfully, the dog had a special collar with a remote control of some sorts. The owner pressed a button and the dog went straight back. I didn’t ask about the technicalities.

On the Zigzag ridge trail things started to become real and interesting. The trail is for the most part heavily overgrown. I feared the worst for the downfall, but it wasn’t bad. Needless to say that the vegetation was soaking wet from the drizzle. Even with full rain gear, it was hard to stay dry. But mostly I feared for my feet. I deeply regretted that I didn’t pack waterproof socks.

The endless descent on the Castle Creek trail #773 was rather dreamy. I had feared the worst, but it was exceptionally well maintained.

Once I finally reached the bottom, three dogs appeared around a corner and attacked me. I defended myself by swinging my poles at them. The owner finally appeared and didn’t even attempt to call them back. All he said was that I should not use my poles against dogs. I remained silent…but was thinking “How about controlling your dogs in a public space instead of bitching at me for defending myself against being bitten?”

Up to the Zigzag ridge again, and again

Next I had to climb up the Zigzag ridge again. This time on Horseshoe Ridge trail #774. I fueled and went for it. The trail was once again very well maintained. Not a given for a trail that receives little traffic.

I noticed fresh footprints in the mud and was wondering who was ahead of me. About a mile up I encountered a woman who was about to turn around for fear of cougars. I mentioned that I had only ever been attacked by dogs in my life, never by wildlife. Nevertheless, I kept an eye out for bears and cougars as I had spotted signs of activities.

It was clear by then that I was not going to be able to finish under 40h. I was glad it was dark when I reached the highpoint and could see the lights down in the valley. The brutal 4-or-so-miles descent on about 345,780 switchbacks took forever. As a rule of thumb, if you cannot hear the road and the river yet, you are still hopelessly far away, so don’t get your hopes up that you’ll be done anytime soon.

I was planning on cracking open a beer and napping for a few hours before driving home, but since my system was full of caffeine, I figured I would drive home first, then have a bed beer. That turned out to be a crucial decision.

Failure to maintain line and speed

Just past Sandy, I got pulled over. Officer Ryan, who looked as young as a college kid, introduced himself professionally and friendly.

Officer: Just to let you know, this conversation is being recorded. I pulled you over for two reasons: you continue to hit the rumble strips and your speed was not constant. Have you been drinking tonight?

Officer: Can I see your driver’s license?

Me: [Finds wet and dirty ziploc that has been marinating in my running pack for two days on passenger seat, among french fries, burger, and milkshake leftovers. Clumsily attempts to fish out driver’s license among a few dollar bills, credit car, and health care insurance card. Finally finds it. Thankfully it is not wet.]

Officer: Please stay in your car while I run your license. Is this car registered in your name? [Disappears…comes back.] No ticket for tonight, have a good drive home.

Me: Thank you, I appreciate that. I will be careful.