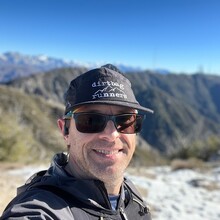 I went up there for the snow and thought it was an awesome route for an FKT, so I submit this as an OKT. Just avoid the snow and the crowds because that will slow you down a lot. It was actually icy snow on the north side of Mount Lowe and had to be very careful over half a mile since the single lane trail is close the the edge. Had to stop a few times because of hikers already stopped to let each other pass. A week day should be fine. It's a really beautiful loop.